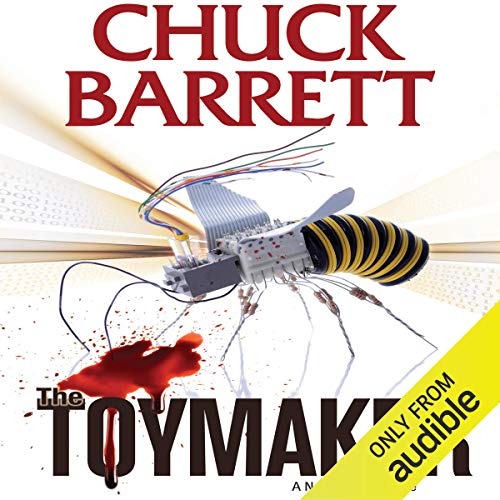 By: Chuck Barrett
Narrated by: Scott Brick
Try for $0.00

Former NTSB Investigator Jake Pendleton faces a dilemma as the line blurs between right and wrong. After his judgment comes into question, Jake is entrusted to his new mentor, an eccentric old man who sees beyond Jake’s flaws. A man who makes ‘toys for spies.’ A man known as The Toymaker.

Jake’s first assignment reunites him with Gregg Kaplan in a daredevil mission to rescue a fellow agent held captive in Yemen. He risks his life to stop the first attack of an al Qaeda mastermind. But now, with no one to trust but himself, can Jake stop the terrorist from destroying what is most precious to the free world? Unfortunately, more trouble comes his way as a killer from his past threatens something more important to Jake than his own life, leaving him to make the hardest decision any man ever has to make—Who to sacrifice.

What listeners say about The Toymaker

I don't get all these bad reviews...

STORY (espionage thriller) - Okay. The Toymaker is not going to win any awards and some of the points in negative reviews I've read are valid -- there is testosterone-driven action, stereotypical characters, motives of revenge and a dramatic narrator -- but boring? I must have read a different book. I would say just the opposite. It's fast-paced and exciting from beginning to end with terrorists, neat gadgets and lots of twists and turns. It's also not hard to follow what's going on, so it's an enjoyable, easy listen.

PERFORMANCE - I don't understand why so many people complain about Scott Brick. It's true that he overdramatizes a bit, but I'm totally fine with it. I like his voice, and he definitely doesn't deliver a boring or monotone performance.

OVERALL - There's no sex or violence, and the violence is not gory or graphic. I recommend the book to anyone who's looking for an easy but exciting listen. It's not perfect, but I was thoroughly entertained.

The Toymaker is Jake Pendleton series Book 2. Jake is no longer with the NTSB; he has moved on to international covert operations with another US agency. The title of the novel comes from the nickname of the old guy who recruits Jake into covert operations; the old guy makes gadgets useful in such operations such as super small drones. Jake is reunited with Gregg Kaplan in a operation against Islamic terrorists in Yemen.

Scott Brick does his normal outstanding job of narration.

The novels in the Jake Pendelton series can be read in any order. This is the one must read book in the series.

Where does The Toymaker rank among all the audiobooks you’ve listened to so far?

This is a really good book. It is reminiscent of Brett Battles Jonathan Quinn series.

This book is full of action from the very beginning a few surprises, a bit predictable at times but for the most part very good.

Scott Brock could read the phone book and make it exciting!

I look forward to my next purchase which will be the third in this series Breach of Power.

For a fast trip around the Middle East, Europe and the US, come take a ride in this tale. From terrorist bombings and kidnappings to taking care of unfinished business, this book has it all. Very enjoyable read. 5 stars.

Enjoyed the charachter development and fast pace of the story. The spy Toys are fun too!

The saga continues and reviewer Wayne likes this book the best of the 3 in the series. Again clever and inventive, but this author is not a re listen for me. Great Audible plan to loan a listen. Author increases and decreases characters in a clever way. So why not a re listen for me??? Again, I have not given it much thought as an editor may do.

Too many better options

This is the second book in the series that I have listened to and I think I’m done. The main character is not likable and the stories aren’t as intriguing as other series. Scott Brick was solid but I’d rather listen to Grayman, Mitch Rapp, Scott Harvarth, Dewey Andreas or even James Reese.

Would you try another book from Chuck Barrett and/or Scott Brick?

No, this sample of the author's and narrator's work was enough to turn me off both of them.

What could Chuck Barrett have done to make this a more enjoyable book for you?

To begin with the characters were two dimensional and stereotypical conflicted tough-guy. If you are into cliche spy fiction, this is for you. I like this genre just as much as the next guy. I couldn't get enough of Vince Flynn. The style and dialogue of this book had me constantly rolling my eyes. I couldn't get through this book, and I'm usually pretty patient.

If you could play editor, what scene or scenes would you have cut from The Toymaker?

All of it. Look elsewhere to use your credit. I wish I had.

This is the first time I write a review of any book at this website. Generally, I am fairly tolerant enough to get through any audiobook, though some have been harder than others. This one literally drove me to write this review. I quit this book about 2/3 through it with a sense of relief.

Not my kind of tale.

Yes - I would try writing the plot without so many of the major characters being driven by revenge.

This appears to be an effort to write a novel that will be similar to those of Cussler, Ludlum, Baldacci and the like. However, most of the "good guys" were as unlikeable as the "bad guys". If readers are not bothered by the focus on revenge, then perhaps it is acceptable...but it is not for me. I would tackle the same plot without the almost total reliance on revenge.

Scott Brick is a master at presenting many different characters, and I actually bought this because he is the reader. He is, in my opinion, one of the best readers of all, for audio books.

Could you see The Toymaker being made into a movie or a TV series? Who should the stars be?

It probably would be chosen; it's gory enough that the special effects folks would have a great time. I can't imagine any star I admire that I would want to see in this film.

As a result of this novel, I will be avoiding not only this series, but any books I see that are by this author. I love books full of international intrigue, craft, and philosophy, but the revenge thing really got in the way for me.

Would you try another book from Chuck Barrett and/or Scott Brick?

i've listened to scott brick before and didn't find him bad, but this time i couldn't separate the characters. poor reading or maybe as bored as i was? i couldn't finish this one at all. thank goodness for audible's return policy.

i'm thinking historical. i don't know if i'm up for another unthrilling "thriller."

his character voices were so subtle i lost who was speaking.

i suppose as it was well-rated,but i just didn't enjoy the toymaker.