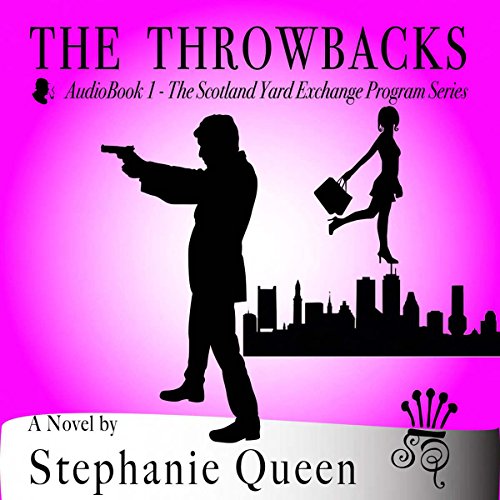 By: Stephanie Queen
Narrated by: Meghan Lewis
Try for $0.00

She's a vivacious, light-hearted young beauty from Beacon Hill. He's a world-weary not-so-young exile from Scotland Yard. She's an orphaned decorator who longs for a family of her own. He's a rogue detective with a superhero complex. She's smitten with this superhero who is the last man she sees in the picket-fence picture of her future. He's smitten with this fluffy young romantic who he sees as kryptonite to his career and well-being.

But if you saw Grace and David in a room full of people, and you had to pick one man and one woman who belonged together, you would pick them. They would be The Throwbacks.

Vivacious young decorator Grace Rogers sets her sights for that picket-fence life she longs for with the unlikely world-weary British exile, the not-so-young David Young. The ex-Scotland Yard detective joins the Boston Police Department to salvage his career. He hires Grace to decorate his Beacon Hill townhouse to salvage his life.

But this rogue detective's plans for a new beginning are threatened when he can't resist the seemingly unseemly romance with his too-young bombshell decorator. Grace turns out to be a key witness in his high-stakes kidnapping case - and like Kryptonite to his career and his well-being with her romantic notions of family life.

What listeners say about The Throwbacks

the jerky reading was hard to deal with. I even sped up the reading time but still very jerky.

Throwbacks? So awful, I want to Throw it Back!

There is very little to like about this book. The plot is improbable and the narrator is stilted and detracts from the story to the point where I just gave up. Worth a credit? No. I'm not even sure it is worth buying the book via Kindle to get this at what I thought was a bargain price of $1.99. Very disappointing.

I would think that the starting scene should have been at least a little stressful for the heroine, yet, she took her timed, flirted and smiled around. She came off as empty headed and irritating.
The narrator was one of those who should have drunk a glass of water before work: her tongue continuously stuck to her palate, clicking with every word.
All in all, I had an annoying and empty half an hour, and even though it might have become better if I powered through, I did not get any indication for it to happen.

What disappointed you about The Throwbacks?

Grace calling David "Batman" and her his "Robin". It is a bit much. Her friend got kidnapped and she can't stand sitting around not knowing so she takes off to go save her friend at a warehouse with no weapons except a safety pin from her shirt to unlock the door. Mind you the FBI's and other law enforcement etc. is at the scene getting ready to rescue the hostage.

Has The Throwbacks turned you off from other books in this genre?

She a new narrator. She needs to practice different voices so people can tell who's talking

Yes, help put me to sleep when I had the Flu a few days ago.

Don't waste your one credit on this book. I didn't give this a 1 star because I did laugh at the "WTF" moments a few time during the book. It's PG if you're wondering. The romance between Grace and David is very little and feels fake. He's 50, and she's 30 with daddy issues.

I would have enjoyed this story more if the narration had been more fluid. I am not sure if the pauses (particularly for the female characters) were meant to be choices in characterization, but it was far too stilted and annoying.

On the positive side, I really enjoyed the variation of accents. That was really well done.

The story was ok. The character of Grace was a little immature and I feel like too much was made about her age. Thirty is not that young.