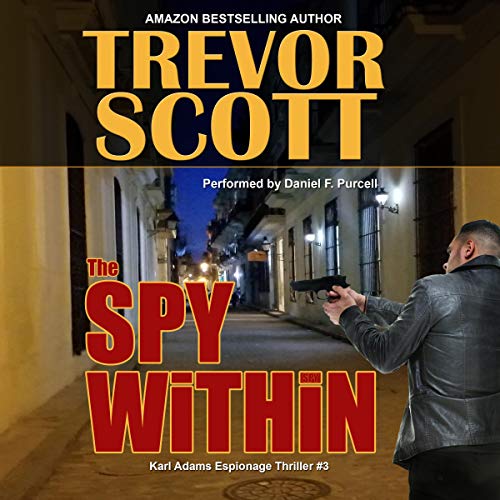 By: Trevor Scott
Narrated by: Daniel F. Purcell
Try for $0.00

CIA Officer Karl Adams is now deep undercover within Russia, having recently finished training as an SVR officer. With his perfect English language skills, Karl is tasked to travel to America to infiltrate a high-tech aerospace company as an engineer.

As Karl makes his way back to America, he must make tough decisions. He knows he can’t steal this new technology for his current Russian organization, because he is still a CIA officer and a loyal American citizen.

But he also needs to find some success as an SVR officer, or he will never move up the ladder in Russia.

What he finds in Boston will test every skill he has gained as a US Army officer, CIA officer, and Russian SVR officer. His struggle soon goes from the theoretical to the actual, and he must fight to survive this ordeal.

What listeners say about The Spy Within

THIS SHORT BOOK WAS AWFUL!

Childlike plot, with the character development of a comic book. Utterly illogical events woven together in an unrealistic thread. Was this really a serious attempt? The reader's performance was poor, and his attempts at replicating foreign accents was ridiculous. Is it even possible to deliver a Russian accent, a Minnesotan accent, a New Englander accent and a Spanish accent effectively in a 6-hour narration? Not in this book. This one is a real "dog".