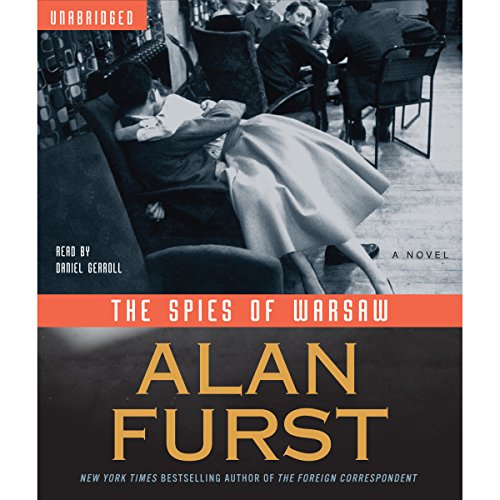 The Spies of Warsaw

By: Alan Furst
Narrated by: Daniel Gerroll
Try for $0.00

Autumn 1937: War is coming to Europe, and French and German intelligence operatives are locked in a life-and-death struggle on the espionage battlefield. At the French embassy, the new military attaché, Colonel Jean-François Mercier, a decorated hero of the 1914 war, is drawn into a world of abduction, betrayal, and intrigue in the diplomatic salons and back alleys of Warsaw.

At the same time, the handsome aristocrat finds himself in a passionate love affair with a Parisian woman of Polish heritage, a lawyer for the League of Nations.

Colonel Mercier must work in the shadows, amid an extraordinary cast of venal and dangerous characters: Colonel Anton Vyborg of Polish military intelligence; the mysterious and sophisticated Dr. Lapp, senior German Abwehr officer in Warsaw; Malka and Viktor Rozen, at work for the Russian secret service; and Mercier's brutal and vindictive opponent, Major August Voss of SS counterintelligence. And there are many more, some known to Mercier as spies, some never to be revealed.

What listeners say about The Spies of Warsaw

Lt. Col. Mercier is a complex yet loveable man, who is highly intelligent and thrust into a benign role as handler prior to WWI in Warsaw. The plot which draws him into an ever tightening circle of intrigue dovetails unexpectedly and omniously with the feel of a true story prior to the invasion of Poland during WWII. What is best about Alan Furst's books, especially this one is that you are immediately in Warsaw and Paris in Springtime, at that time at that moment, every detail, every nuance enriches the story.

What would have made The Spies of Warsaw better?

What a shame to ruin a GREAT series by changing narrators in mid-stream. I certainly hope it was not a money issue, because if so what a waste and what false economy. The story is as good as any, but when you can't tell the characters apart in such an intricate multi-plot story, it is ruined.

The story line was a good Furst intimate look at wartime Europe and the lives of the "ordinary" people who get caught up in extraordinary circumstance.

Who would you have cast as narrator instead of Daniel Gerroll?

Absolutely RUINED the story. George Guidall of course, no brainier, why ruin a great series?

Story great, hate that I won't be able to finish the series because of narration. Very sad

All authors should be very careful of who they get to narrate their works.

If not 1st among spy rivals, a decent place/show

A robust, tight and occasionally frisky Furst novel. I am quickly approaching the end of my Furst 'Soldiers of the Night' jag and thus far it has been a fascinating experience. His character-driven novels could easily be bound into one gigantic prewar novel. They all swirl and fugue with similar themes, many of the same characters, and the same dark ambiance. He is detail oriented, historically accurate, writes well AND is one of the best atmosphere writers around. He leaves you feeling the grit, the cold, and the tongue of the WWII night. He is a first-class genre writer that while not quite in the le Carré aristocracy, is certainly in the spy-Master ruling class.

'Spies of Warsaw' is centered around a French military attaché in Warsaw who is struggling with a growing sense of urgency about the inevitable crash of Nazi Germany tanks into France and Poland, while also dealing with a satchel filled with unreliable allies, reluctant spies and self-serving superiors.

Exquisite balance of compelling plot and historical fiction. Captures the intrigue leading up to the fascist expansion of the thirties and forties. And to some, a cautionary tale for today.

Still in Draft but Has Great Potential

Would you consider the audio edition of The Spies of Warsaw to be better than the print version?

They're different? I listened to the audio version and the story line seemed rather disconnected.

If you’ve listened to books by Alan Furst before, how does this one compare?

The journey to look at the german's military preparation and entering the area where the tank traps were buried.

It was full of moments of suspense. I held my breath in anticipation several times.

The sex scenes tended to separate the novel into two parts. Though they were well-developed and well written, they seemed obligatory and that made me cringe.

Recommended highly! Very educational since this was happening when I was born in 1937. Thanks

The plot wanders and lacks focus. Irritating narration that is distracting. If you like fast paced spy thrillers pass this by.

Furst's novels are subtle, elegant and evocative. They summon the inter war world to life and call forth the character of that time with all the attendant hope and desperation as specter of tyranny casts long shadows. Even though we, as the readers well in the future, know how it ends and how their efforts are doomed to be overwhelmed, we are with them and are somehow hopeful that this time with a twist and a turn these people, Mercier and Anna, and Vyborg will somehow emerge into the post war world and find themselves in a secure place together and spared the worst of the horrors.

This is as advertised: He takes you back into a very specific time. The narrative moves quickly and keeps you interested. The plotting is adequate but the atmosphere is the best part.

An effective historical novel should combine accurate background, tense plotting and a satisfying conclusion; added to this an effective audio book should have a performance that slips into the background because of effortless voice control and lifelike characterisation. The Spies of Warsaw combines all of these requirements. Allan Furst novels sometimes have the sex life of a bodice ripper but he shows restraint in this enjoyable tale of French pre-war espionage in Poland.