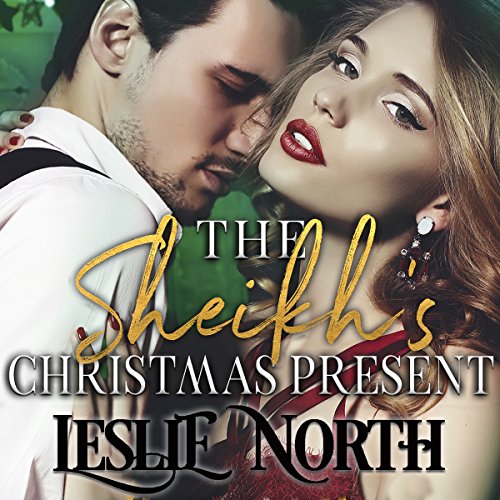 By: Leslie North
Narrated by: Joseph Tobey
Free with a 30-day trial

The Christmas season is a time for giving, and pilot Maria Walken has a planeload of gifts she’s gathering for Syrian refugees. Her charity has gotten a bad rap, and this time she’s determined to get her cargo delivered in time for the holiday. When a businessman shows up in need of a lift, she can’t stand his display of wealth...or the way he takes her breath away. But when he offers a large donation to her charity, Maria can hardly refuse.

Sheikh Jarik Shadid is trying to make it to Lebanon to testify against a former friend. With his need for discretion and few options to choose from, he’s more than willing to contribute to Maria’s charity in exchange for a seat on her cargo plane. But as a freak snowstorm blows in, extending their travel plans, Jarik’s sensible exterior is starting to crack under the beautiful weight of the principled pilot.

Maria always promised herself she’d never fall for a rich man, but as they work to spread holiday cheer, she’s beginning to wonder if Jarik is everything she’s ever wanted for Christmas.

What listeners say about The Sheikh's Christmas Present

This is the second book in the Shadid Sheikhs Series. I loved this short Sheikh's Christmas Story, and I loved the Epilogue! Joseph Tobey has a great voice easy to listen to. I received this free review copy audiobook at my request and I have voluntarily left this review.

Who needs mistletoe when a snowstorm can prove just as rewarding? Jarik is easy on the eyes, with a bank account big enough to draw anyone's attention. Maria leads with her heart. This firecracker wants to make a difference in the world and her charity work helps her do just that. When Mr. Ego and Ms. Chip on Her Shoulder meet the chill in the air quickly becomes a raging inferno. The Sheikh's Christmas Present brought heated exchanges and magical moments as it lit up my heart with this dynamite duo.

I don't know what I'm doing listening to all of these Christmas novels in the middle of a heat wave but...it was good. I have not read the first book, although this is easily a stand alone, I think it would've been beneficial to read/listen to book 1.

Maria is a sassy woman who runs a charity that provides food, medicine and toys to Syria.
Jarik is a man with an ego that needs to get to Syria - anonymously to testify against a former friend.

Although Maria is not impressed by his money & neither one of them is looking for any type of relationship (which means they will definitely be striking one up) she does have a plane that can get Jarik to Syria on time.
They strike up a deal that will help them both out but as all romance stories go, they end up with more than they bargained for and the fireworks fly!

Although I enjoyed the book & still wish I had read/listened to book 1 - this book could rub some woman the wrong way & wonder why Jarik wasn't charged with sexual harassment so if this type of scenario bothers your senses then you may want to find something different to read.

Not What I expected

I got this ARC via audiobook boom and this is my voluntary review. I love Leslie North as a writer but this one just did not work for me. The h is a total nut job rom the beginning. She is late and stops to admire someone's eyes and misses her bus then runs to catch it. Can't find her wallet and gets angry with the guy who not only stopped the bus for her but paid for her to ride. He helps her in every way possible throughout the story and she shows her gratitude in a negative way by being mean spirited. She needs him but she allows her double mindedness to get in her way. I like when sparks fly but realistically this one just had sparks flying in the wrong direction. The narrator nailed the emotions so much so that I took an instant dislike to the h and even in the end did not care for her. This is not the story I expected.

Wealthy, Is It Always Used For Selfish Motives?

Maria is in her early 20’s and began a charity of providing toys for refugee children. She depends on wealthy donors to support her charity, yet she views in a negative light...this gets explained in the story.
Jarvik is the second son of a sheikh and is rich...which is an issue for Maria when they meet.
Over the course of several days the two fall for each other..yet it is a bumpy ride. Secondary charters, Maria’s friend Tessa, and brother Sebastian, Jirik’s two brothers and father bring more depth and interest to the story...easily a stand-alone. but of course I’m dying to know his brothers stories and Tessa’s
This would be easily a 5 star story except I got tired of Maria’s temper...at least as portrayed by the narrator...he made her almost always have an edge to her voice...But his Jirik’s voice was incredible..soft calm deep sexy! Also I liked his voice, emotion and pace for everything else.
You really can’t go wrong with a Leslie North story!

Leslie North delivered another present to my ears. I love her books featuring Sheikhs, with their incredible imagery, endearing characters, great narration, fun banter, some humor, and great storyline. This book meets that criteria. Maria is a feisty American pilot while Jarik is the son of a sheikh. They have great chemistry, yet Maria fights it. She has an aversion to wealth, while Jarik comes from money. The scene at the palace was the most memorable in my mind. I loved how that included a Christmas miracle. This book is part of a series, and is a standalone listen. Joseph Tobey is a new to me narrator, and I really enjoy his style and distinguishable voices for the various characters.

A present for your ears

This is book 2 of the series. This was a great short listen. But it was full of heart , love and fun. Leslie knows how to draw the listener in and engage their heart .
Hero is Jarik. Heroine in Maria.

Maria is on a mission since it’s the Christmas season. She sees all the children in the US hVe a great Christmas and she wants the same thing for the children in Syria. She loves doing what she does. It’s all charity for her .

Jarik needs to get to Syria for personal reasons. He’s one of the sons of the Sheik. And he needs to be home . He’s trying to keep his friend from going behind bars. He’s desperate.
Maria has a plane to get to her destination. Jarik needs her plane and is willing to pay her for it. Maria is put off from any man that thinks he can just throw his money around

Jarik is attracted to Maria. How does he change her mind. Do both of them do what they set out to do

The narrator Joseph is great. He knew how to do all the characters, you knew which ones by his voice

It's wonderful to have Christmas in the middle of the hot summer we are having! This story hits the spot. Maria runs a charity that delivers presents to refugees in Syria. Jarik needs a ride, keeping him anonymous to go and testify against a former friend. The two make a deal, but get so much more than what they bargained for! Leslie North writes and entertaining story with witty banter, frustration and love. Maria has a huge heart, but I at times became very frustrated with her. She would do anything to sabotage her feelings for Jarik. Jarik is nothing short of persistent and really has to work to win his woman. It's a quick, fun listen with a wonderful message of sharing with those less fortunate.

This is my first narration by Joseph Tobey and I am very impressed. He has a large array of voices, as there were quite a few characters scattered throughout the book. Each has it's own personality and is easily distinguishable to the character. His portrayal infused a liveliness and passion into a wonderful novel.

This story is very quick good. The narration was good and kept you entertained. This was my first book by this author but definitely will not be my last. I was given this free review copy audiobook at my request and have voluntarily left this review.