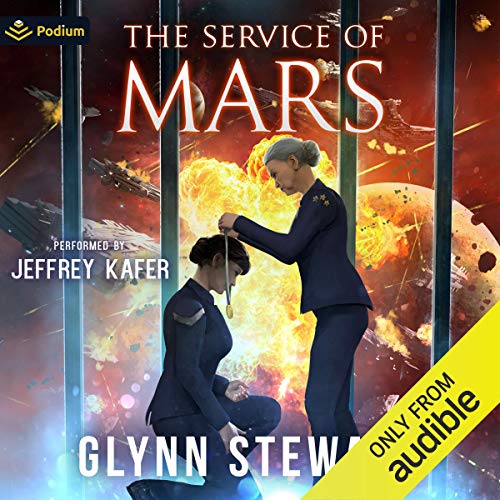 The Service of Mars

By: Glynn Stewart
Narrated by: Jeffrey Kafer
Try for $0.00

Secrets have been unleashed. Worlds have fallen. A Mage-King has died. But the war rages on!

Secrets and warships combined to turn the tide of the Siege of Legatus, delivering the capital of the Republic of Faith and Reason into the hands of their enemies. With Damien Montgomery called away to lead the entire Protectorate of Mars, fighting the war falls to Mage-Admiral Jane Alexander and Mage-Lieutenant Roslyn Chambers.

As the Martian Second Fleet moves against the remaining Republic worlds, Captain Kelly LaMonte’s covert stealth ship sweeps the worlds away from the conflict, searching for the Republic’s government-in-hiding and a chance to end the bloody conflict.

But this war began in the shadows, and the secrets hidden in those shadows threaten to turn the tide of the war once more - and bring it to the heart of the Protectorate!

What listeners say about The Service of Mars

Always an exciting story! I am eagerly waiting for more! I hope there will be more of Montgomery in future story lines!

Jeffrey Kafer is an outstanding narrator.

Omg I loved this book. Glynn Stewart when is Starship Mage 10 coming out? I couldn't put this book down.

love this series of books each character is engaging and makes you want to keep listening. It does not disapoint. looking forward to further books to come.