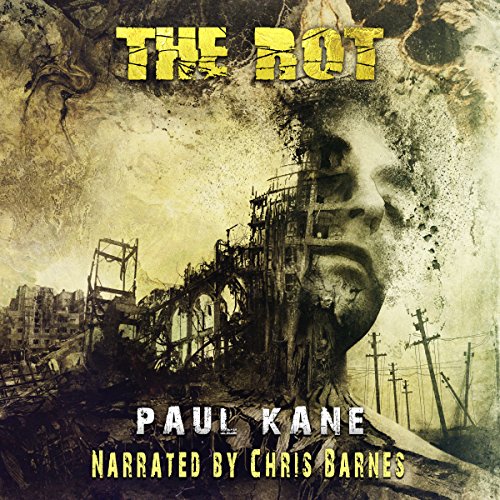 Something has happened to the world.

People are going mad, the very foundations of society are crumbling. Only Adam Keller, testing a prototype environment suit, apparently remains safe - but for how long?

Can anything be done, can any of it be reversed, before everything goes to rot?

The latest post-apocalyptic tale from award-winning and best-selling author Paul Kane (the sellout Hooded Man, The Disease, The End of the End) presents a nightmarish vision of a possible future, blending social commentary with pause-resisting action. This is one that fans of The Road and The Walking Dead will really not want to miss!

What listeners say about The Rot

This is going to be a hard book to review as I don't want to spoil things. The story is centered on Adam. He is testing a revolutionary new suit, called a Skin. From what I gathered, it recycles your waste, sweat etc and makes it so that you don't need to eat or drink etc. While in the suit, some event happens that causes everything to start rotting, I mean everything!! Adam seems to be the only person immune to it because of the suit. Is he it? Is there hope for him and his future?

While I liked the concept and originality of the plot, it felt rushed at times. I know it's a relatively short read, but I do think that the overall world building suffered because of it. I wanted to know more about how the Rot came about and about the suit.

Same way with the character development. We never really got a sense of who Adam really was. He goes through a lot during the Rot, but he never seems to grow. Again, I know it's hard to have all the elements in a short book, he still could have grown a little.

My thoughts seem all doom and gloom about the book, but it's not all bad. The overall story was good and I liked it, I just wanted more from it! I will check out more from this author though, as he has a wonderful imagination!!

Narrator Chris Barnes did a great job with this book. It's told in a format of recordings from the main character and the narrator really knew how to bring him to life. He captured the hopelessness, the sense of lose from the character perfectly and gave a brilliant performance. I've listened to quite a few of the books he has narrated and never once has it been a less than stellar performance!!

*I received a free copy of this but voluntarily reviewed it. This in no way affected or influenced my thoughts.*

Not up to par with other Post Apocalyptic stories

I received a free review copy of this audio book, at my request, and am voluntarily leaving this unbiased review.

A mix a "I Am Legend" and "The Happening" (movies), The Rot is another boring entry in the Post Apocalyptic genre.

The story is told through journal entries, made by a survivor of the Apocalypse. It is the main character actively trying to provide a record of the end of times. The main character says he is not very good at detailing his experience, as some excuse for poor writing I suspect. This makes little sense, since as a military test pilot he would have to write after action reports and detail his test flights.

The end of the world is vague. Something happens and bad things occur. If you're looking for a detailed analysis you have the wrong book. The main character doesn't have the background to really figure out what's really happening. I haven't decided if I believe the author doesn't have a grasp on the science behind his own creation, or if he wants to create a world he can build on later. A little science is thrown at this book, but so little it seems like none.

The author tries very hard to shock the reader into a sense of loss and brutality, but rather than through real story telling, he does this by throwing a child in to a horrific situation. It could be considered clever to use our own built in fears against us, IF he has had any other tricks up his sleeve, or if it was only done once. However, neither is the case.

This is a short story, roughly 4 hour audio book. Most of the ideas and plot do not fit well into this format. The plot is poorly developed, the settings are vague and there is 0 character development. It could be argued that this is a symptom of the length, however, if you look at something like the "Murderbot" books by Martha Wells, they are about the same length, also have a first person past tense POV, but the story telling is like night and day. Where she tells a rich story, in a well developed setting, with dialog and nuance, Mr. Kane tells a vague story, with flat settings, almost no dialog and forgettable action sequences.

The voice narration by Chris Barnes is fine. Not bad, not great, just fine. His voice is a little annoying and he doesn't do a great job conveying excitement, but he does an alright job of portraying despair and hear break. He had little opportunity to do multiple characters, in this work, so I can't speak to his range.

All in all, this book has a forgettable story that is light on details and characters and heavy on the main character talking about how bad he is at story telling. Voice narration is forgettable, at best. The book has little to say, in general, and yet still feels under developed. There are so many better post Apocalyptic books out there, this I don't recommend bothering with this one.

I enjoy all of Paul Kane's work & this tale in particular was very enjoyable. I recommend it to fans of the genre.

a dark novel with literary overtones

Adam is a fighter pilot chosen to test a self-sustaining skin suit.  It recirculates all his water and waste so the wearer doesn’t need to eat or drink.  It was meant only to be worn for one week, but when the world falls apart, it is the only think keeping Adam from the rot that is infecting the world.

Some contagion has entered the world, turning men and women into mindless and ultra-violent mandmen.  But it isn’t just the people, it’s all things.  Buildings and machines are decaying, even the very ground is disintegrating.  Adam may be the only man left untouched, protected by his suit.  The cause is unknown and he may be the only one left to find a stop to the destruction, if he can survive.

There is a feeling of I Am Legend by Richard Matheson.  The bleak separateness of the landscape and everyone out to kill him.   Has the world simply evolved and now Adam is the outsider, trying to hold onto the past.  The listener doesn’t know.

One might be tempted to call this a zombie novel, but the infected people are not dead, just maddened by the disease, though they do act like them.  The dark hopelessness of the novel is quite compelling and fits a certain genre.  It is a quick listen, but feels full, the world well described and Adam well developed as the reluctant last man on Earth.

The novel is performed by Chris Barnes.  He does an excellent job, catching Adams moods and intense loneliness.  He does more than simply read the book, he acts, and it is well done.  There are few other character voices, but they are done well and easily differentiated.  Excellent.

The Rot fits into several categories at once: Zombie, Sci-Fi, Horror and Dystopia.  It is a dark novel with literary overtones and will appeal to this audience well.  An excellent book that leaves the listener thinking about it long after its completion.  Recommended.

Great story with a unique angle

I loved it's originality. Great idea. Narration by Chris Barnes was fantastic.

What was one of the most memorable moments of The Rot?

The priest who was infected.

Really only Adam. Everyone else around him died. He was a bit of a jinx.