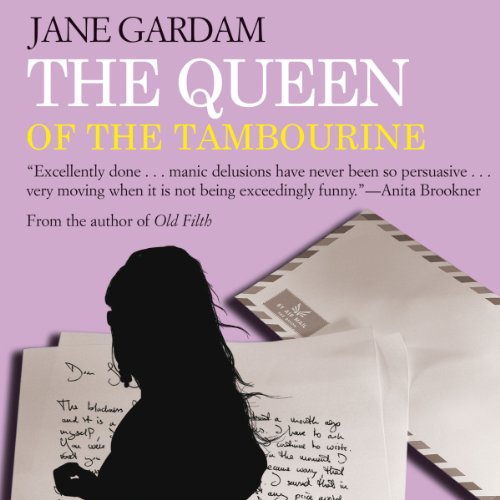 The Queen of the Tambourine

By: Jane Gardam
Narrated by: Hollis McCarthy
Try for $0.00

In prose vibrant and witty, The Queen of the Tambourine traces the emotional breakdown - and eventual restoration - of Eliza Peabody, a smart and wildly imaginative woman who has become unbearably isolated in her prosperous London neighborhood. Eliza must reach the depths of her downward spiral before she can once again find health and serenity. This story of a woman's confrontation with the realities of sanity will delight listeners who enjoy the works of Anita Brookner, Sybille Bedford, Muriel Spark, and Sylvia Plath. Winner of the Whitbread Prize for Best Novel of the Year.

What listeners say about The Queen of the Tambourine

The story kept dragging me down into depression

What disappointed you about The Queen of the Tambourine?

After an hour, I finally stopped listening. I didn't know the story was going to be a first person monologue with a narrator who sounded depressed. However, a depressed narrator does fit the content of the monologue, even though she expressed some hope at times, so perhaps the narrator intentional came across that way. In that case, she was talented and effective.

I'm going to listen to a cozy mystery from the Mrs. Jeffries series and the Molly Murphy series.

Who would you have cast as narrator instead of Hollis McCarthy?

The narrator was fine.

In all fairness, I did not listen long enough to see if there was an a ha! moment or a clever twist. I kept waiting for something to happen or a change in the narrator or tone. The whole performance was just too gloomy for me, but may be perfect for someone else. I don't normally like the best sellers that most people do. I like lighthearted cozy mysteries like Hamish MacBeth, Her Royal Spyness, The Poor Relation, and Agatha Raisin.

Sorry to say that, in the end, I'm rather disappointed with this one. Gardam uses an epistolary framework--although it's hard to remember that midway, when the letters become so lengthy and self-absorbed that the reader forgets there is a supposed recipient. The writer/narrator, Eliza Peabody, is a middle-aged know-it-all who initially feels compelled to proffer her superior wisdom--gained a s a hospice volunteer--to her neighbor, Joan, who apparently suffers from debilitating pain in one leg. Eliza has decided that Joan's pain is psychosomatic and advises her to just get over it, offering her own help as an amateur psychotherapist. Surprisingly, after a few more letters, it is discovered that Joan has run off, leaving her leg brace in the marital bed. Although Joan never replies to Eliza's letters, we learn that she has embarked on a new life, travelling to exotic locations and having affairs with much younger foreign men. Periodically, gifts from Joan arrive--but never a letter. In the meantime, Eliza's own life takes a turn for the worst as her husband moves out to take a flat with Joan's abandoned husband. The letters continue, with Eliza portraying herself, narcissistically, as the abandoned spouse, now abandoned as well by any borderline friends she might have had, and making herself out to be the heroine of everyone's lives, from Joan's university-student daughter to Barry, a young man dying of AIDS in the hospice.

Initially, I was intrigued by Eliza's voice, which Gardam conveyed with much humor. But as the letters dragged on and the descriptions of her own escapades and musings became longer and more self-pitying, I got bored. Yes, I do understand that what Gardam was trying to portray was the sadness and near-madness of a woman who has isolated herself from everyone; it just didn't particularly interest me, and I found the one-sided epistolary device tedious.

Three stars for the writing and the creation of a complete character, plus the initial humor is Eliza's self-deceptive letters to Joan. But Gardam has written much better novels.

Jane Gardam is a genius. But for some odd reason the publisher has retained an American actress to play the main character, an Englishwoman. The reader’s painfully clunky attempt at an English accent detracts from the book.

Reader with a cloth ear for English accents!

Wonderfully fanciful story of a middle aged woman whose husband has left her, in the form of letters to a neighbor. She is a delightfully unreliable narrator who's character develops and expands throughout.
Sadly the reader was terrible. Her grasp of British regional and upper class accents so poor that it really spoiled the book for me.
Was it not possible to have an English reader with a feel for the voices and changes of accent so central to this novel?

Jane Gardam always creates fascinating characters in gripping circumstances, but The Queen of the Tambourine's structure didn't hold together for me. I experienced this to a lesser degree in other novels of hers, but this one just fell apart. Many times, I wasn't sure whether it was worth the effort to sweep together the scattered fragments. Of course, I finished listening to it ....... a real credit to her power as a writer.