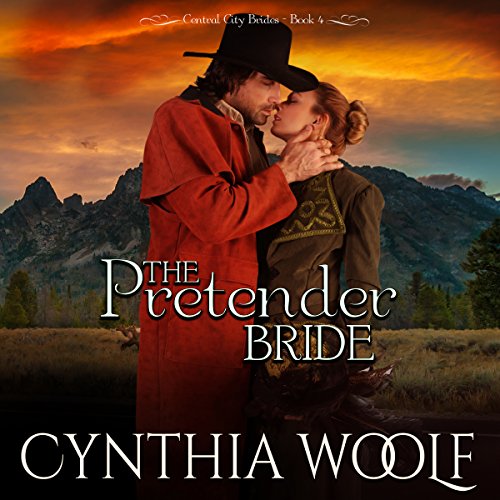 By: Cynthia Woolf
Narrated by: Beth Kesler
Try for $0.00

Lost and alone after her stepfather is murdered on the streets of New York, Katie takes her two young siblings and claims them as her own. Pretending to be a widow, she flees to Colorado Territory as a mail-order bride and into the arms of the handsome gunsmith, Robert Wallace. The attraction is instant, but just when things are looking up for her, the past comes calling - and Katie discovers harsh truths about her stepfather that put everything at risk. Her stepfather had secrets, and they're not done with her yet.

Robert Wallace was a skeptic until he watched his friends settle happily with their mail-order brides. When his own seemingly perfect family arrives, he's thrilled. Until he discovers his new bride is surrounded by layer-upon-layer of lies. He's been tricked by a scheming woman before and he won't be taken in by another one, no matter how innocent she seems. No matter how badly he wants her.

Katie is determined to keep her new family together, come hell or high water. And no one is going to get in her way. Not the New York gangsters who followed her to Colorado. Not her past. And not the stubborn, irresistible Scot who is her husband.

What listeners say about The Pretender Bride

Can Love Survive a Lie?

What a beautiful story of love and forgiveness. What proves that a person truly loves another? The answer is simple, they are willing to Sacrifice their life to protect the people that they love.

That's one of the incredible things that happened in this story, but who did this and why? Who or what was Katie running from to protect her children?

The narrator was wonderful, I loved that her speech was that of a Scottish person. that made the story more realistic. She put such feelings into her words. Great job.

I highly recommend this audiobook to everyone. I enjoyed it very much and I think you will too. Please give it a try, you will be completely entertained and not be disappointed at all.

Sometimes mail order bride stories seem to follow a certain outline. But this story has intrigue and plot twists that makes this story one you will not want to put down. The children are precious in the story. You have a bride posing as a widow who has no idea what it is like to be married. And I can't tell you more or I will take away the surprises.