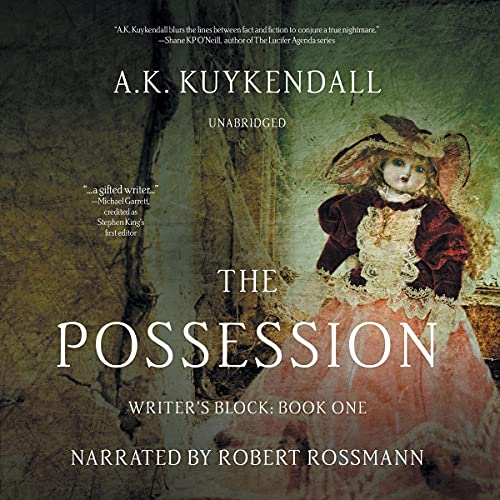 By: A.K. Kuykendall
Narrated by: Robert Rossman
Try for $0.00

A famed horror author is on the verge of his magnum opus - a labyrinthine cryptogram that details the end of days.

When Gregory Stillingsworth buys an antique doll in India, the best-selling horror novelist doesn't haggle over the steep price. He simply must have the beautiful, enchanting doll. Only months later, when it is far too late, does he realize that he's merely the latest in a long line of victims to become possessed by Christie, a pernicious tool of Satan.

As the battle lines between the angels of light and darkness are drawn, Gregory, his wife Jamie, and their unborn child become trapped in an ancient war that has no beginning and no end, a conflict that turns time inside out and reason on its head.

Evolved Publishing Presents a terrifying thriller that's perfect for fans of Stephen King, Dean Koontz, and any spine-chilling tales of horror. This first book kicks off the Writer's Block trilogy, which explores the age-old War of Angels. Better leave a light on...or three or 10...for this one.

"As much as I like Dean Koontz and Stephen King, none of them build such nice twists and turns into their plots." (William Greenleaf)

"I honestly feel that you're a gifted writer." (Michael Garrett, credited as Stephen King's First Editor)

"A.K. Kuykendall blurs the lines between fact and fiction to conjure a true nightmare." (Shane KP O'Neill, author of "The Lucifer Agenda" Series)

What listeners say about The Possession

I enjoyed it. It was confusing at times but overall a good listen. Looking forward to sequels.