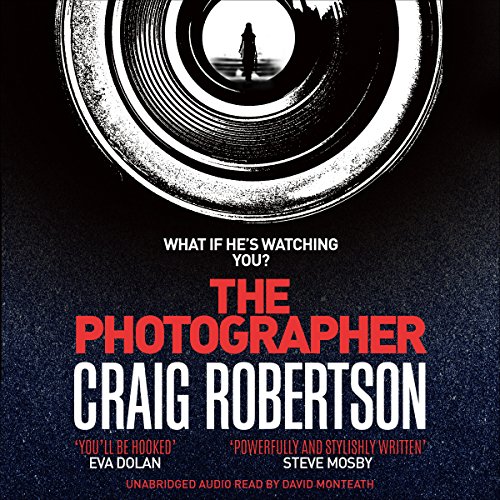 By: Craig Robertson
Narrated by: David Monteath
Try for $0.00

The sergeant took some from each box and spread them around the floor so they could all see. Dozens upon dozens of them. DI Rachel Narey's guess was that there were a few hundred in all.

Many of them were in crowd scenes, some just sitting on a park bench or walking a dog or waiting for a bus or working in shops. They seemed to have no idea they'd been photographed.

All women. All attractive. All between their late teens and early 30s.

A dawn raid on the home of a suspected rapist leads to a chilling discovery, a disturbing collection hidden under floorboards. Narey is terrified at the potential scale of what they've found and of what brutalities it may signal.

When the photographs are ruled inadmissible as evidence and the man walks free from court, Narey knows she's let down the victim she'd promised to protect and a monster is back on the streets.

Tony Winter's young family is under threat from Internet trolls, and he is determined to protect them whatever the cost. He and Narey are in a race against time to find the unknown victims of the photographer's lens - before he strikes again.

"I can't recommend this book highly enough." (Martina Cole)
"Craig Robertson's Narey and Winter series goes from strength to strength, and this latest instalment is the most compelling - and disturbing - yet, delving into the horrifying world of murderabilia collectors. Brace yourself to be horrified and hooked." (Eva Dolan)
"Fantastic characterisation, great plotting, page-turning and gripping. The best kind of intelligent and moving crime fiction writing." (Luca Veste)

What listeners say about The Photographer

Not one wasted word here & David Monteath is fab!

This book is so well written and tightly edited. It draws the listener in from the first, but by a third of the way through, it is truly tough to turn off and led to two nights of listening into the wee small hours for me. The characters and locations are richly drawn, the story intelligent, plausible and compelling. There are moments to wince at, but it is entirely in keeping with the story and never gratuitous. There is a strong emphasis on Police procedure.

David Monteath is always brilliant in narrating and he does a winderful job here. I look forward to more from this author and hope David continues to narrate his books.

As always, a wonderful narration by David Monteath. His character protrayal is a joy to listen to.
This was my first Craig Roberston novel. While it dealt with a difficult subject matter, it did so sensitively without diminishing the horror and violence of sexual assualt.
The timeline at the beginning of the story seemed sloppy and underdeveloped which in turn failed to build the expected tension or frustration at the outcome of the initial hearing. However the pace picked up as the book progressed and the story was much tighter. Some of the methods that were depicted to manipulate a witness and ultimately garner a confession were a bit far-fetched but overall, the character dichotomy was interesting and the ending satisfying. If a well paced character-driven novel is your cup of tea, then this book is for you.

I was hooked from the opening chapter. Listened at every opportunity. the narration was brilliant also. I would highly recommend this whether book, kindle or audio.

I really enjoyed this book, even more so by the excellent performance by David Monteath. This should have lasted me for a week...but I was so enthralled I finished it in two listens. This is definitely a book to buy!!

This book has everything you will need in placing well defined characters in a realistic plot. I can't rate this one too highly, so I will just say; well done Mr Robertson I look forward to reading more of your work.

This is a great story, well written, clear characterisation, tough situation for all involved. it was never going to be easy to listen to a story of stalking, abuse and rape, but the bit that made me turn off because I couldn't take any more of the emotional wringer this book puts the reader through, was when the trolls came out. not only is the victim of such attacks unable to defend the faceless cowards who do this stuff, it really brought home to me just how defenceless the target is, add a baby girl into that and I had to stop reading for a while. Glad I returned to it though. This is a creaking good book.

it was a great and in-depth veiw on Glasgow. even down to the slang and short hand that most glasweigins use, this is main reason I decided to listen was to hear about a city I know well and enjoyed it greatly. wish the other titles by this author were available!

Brilliant book from start to finish

One of the best books I have listened to this year. Gripping and full of great characters. I found I had a tear in my eye at some bits - unusual for me, as the story is quite harrowing in parts, but well worth the read.

I can't spoil the storyline but the subject of internet trolls is key to the plot. I may be naive and know there are "keyboard warriors" out there but the extent of the nastiness and crowd bullying mentality is horrifying. If nothing else this book highlights a need for more transparency, policing and investigation into this 21st century phenomenon.

ONE OF THE BEST OF ITS KIND

I just couldn't stop listening to this excellent thriller/police story. The characters are well defined and the topic is very relevant. It held my interest all the way and I am going to have some problems finding another to replace it. Frankly, if there were 6 stars I would give it just that. All the ingredients were there:- a good story, tension, a realistic look at violence against women and a lively pace. Thanks Craig Robertson.