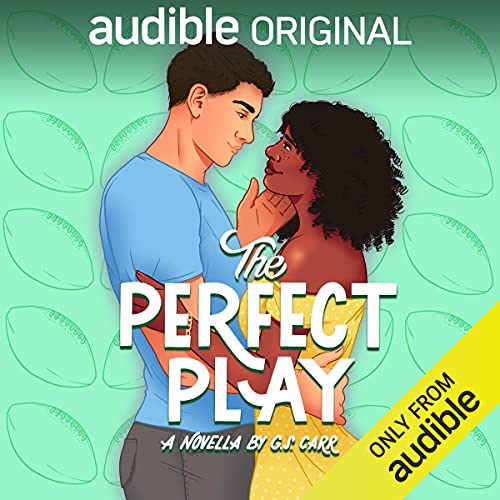 By: G.S. Carr
Narrated by: Trei Taylor,Ryan Kailbourne
Try for $0.00

In this romantic-comedy novella, the sexiest player in the NFL and a small-town librarian prove that when opposites attract, their chemistry can be game changing.

Simone Thompson wakes up in a Vegas hotel suite to discover three things:

As part of a football family, Simone knows all about the game, the good, the bad and the ugly. That's why she joined her brother's trip to Vegas in the first place - to keep an eye on him, not to end up entangled with her crush. Her very out-of-her-league crush.

James has always had the hots for Simone, and now that they're married, he sees an opening to prove to her he's more than just a playboy and that they really do belong together. But if he's really going to win over his bookish princess, he'll need to execute the perfect play....

G.S. Carr has always enjoyed indulging in her imagination. At a very young age she had a thirst for reading and the many possibilities it helped come alive in her mind's eye. Carr can normally be found locked away with a good book in her home in Charlotte, North Carolina, or traveling the globe to places like India, Bali, Tokyo, or London.
.
ORIGINALS

We’ve rounded up the best rom-com listens to keep you swooning (and laughing) the whole way through.

What listeners say about The Perfect Play

I loved it. This book was a bit short. There was room for a full on sport romance comedy but quality novellas is a dying brand so I was glad. Tasteful maybe mild romance, clean language and interesting story line

I loved this book. I would have liked it to be longer. I will be listening to this again.

If you want a feel good short story this ones for you!Well written and well narration- 10/10👏

What a perfect little listen!

This book was such a perfect short FREE listen. I loved this story. Character and story development flowed well.

Funny, light and wholesome like a first date. I would have liked more story after the couple made up.

Really enjoyed this novella and definitely worth the listen. Thank you audible for including this in my membership

How do you know if a mistake is the right thing?

You wake up with a hangover and married, what next? Be true to yourself and each other.

a fun way to kill 2 hours

It was extremely predictable but overall cute. it's definitely worth the listen. 15 word count

It was a cute, good story but a little too short for my tastes. I like them longer with a bit a after story. Loved the HEA but too quick of a listen in less you only a a little bit of time. But I enjoyed it.

This was a great short story. I hope it becomes a prequel or something because the characters and plot were fabulous.