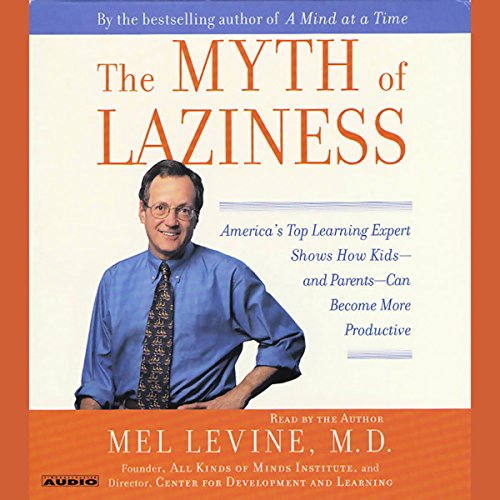 The Myth of Laziness

How many times have you heard a teacher say that your child has tremendous potential "if only he'd just apply himself" or "if only she'd work just a little harder"? How often have you said the same thing to your son or daughter? Or perhaps you have a coworker who can't seem to finish anything; his reports are never in on time, or her projects are always behind schedule. No matter what excuses you hear, you suspect that laziness is the real reason for your colleague's low productivity.

Almost no one is actually lazy, says Dr. Mel Levine, author of A Mind at a Time. Low productivity - whether in school or on the job - is almost always caused by a genuine problem, a neurodevelopmental dysfunction. Despite this, untold numbers of people have been stigmatized by unfair accusations of laziness, many of them adults who still carry emotional scars from their schooldays.

In The Myth of Laziness Dr. Levine shows how we can spot the neurodevelopmental dysfunctions that may cause "output failure," as he calls it, whether in school or in the workplace. Dr. Levine identifies seven forms of dysfunction that obstruct output. Drawing on his years of clinical experience he describes eight people - children, adolescents, and adults - he has worked with who exhibited one or another of these problems. He shows how identifying the problem can make all the difference, leading to a course of corrective action rather than to accusations of laziness and moral failure.

With its practical advice and compassionate tone, The Myth of Laziness shows parents how to nurture their child's strengths and improve their classroom productivity. Most important, it shows how correcting these problems in childhood will help children live a fulfilling and productive adult life.

"The advice is on-target...and should help struggling parents." (Publishers Weekly)

What listeners say about The Myth of Laziness

I am an educational consultant who works with charter schools and am constantly dealing with, in one way or another the issues in this book. As usual Dr. Levine provides great context for me on the issues many learners and educators confront daily. If you are looking for a context to frame issues around getting schools to do as much as is necessary to properly help your student learn, this book will provide you with plenty.

I ordered this book not knowing what to expect. What I got was a very intelligent set of observations of people with "output failure" from a variety of causes. Although some of the examples are more extreme than anyone I know, I found myself somewhere in the stories of each of these young people. He has thoughtful recommendations and he makes it clear that there are no easy cures, but rather meaningful approaches to let the struggle towards improvement continue.

I found that once I started this book I had a hard time turning it off. I was intrigued by this new approach to learning. I really think this author is on to something. I hope that his ideas become more public and that our schools take these approaches and put them into practice!!

I don't think anyone would like this book. The book is stating the fact, that some people are lazy, but no advice how to fix it. I listen to the end, and there was not answer to my question. Just the fact, we are who we are, there is no fixing...waste of time and money.

I found the book very interesting. I did not expect to realize a bit of myself and husband in there. Always learning new ways to help others.