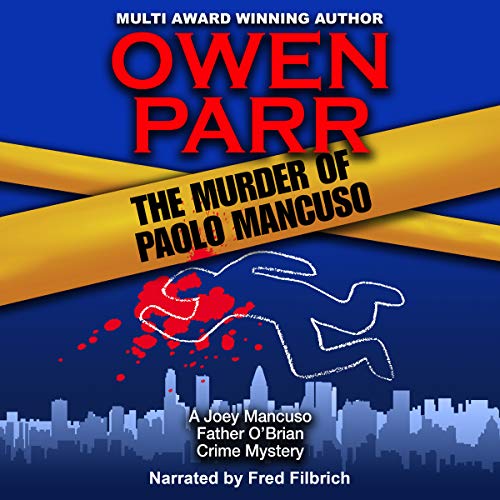 The Murder of Paolo Mancuso

By: Owen Parr
Narrated by: Fred Filbrich
Try for $0.00

PI Joey Mancuso was just a kid when he watched a stranger walk into a Little Italy bar, shoot his mobster dad in the chest, and calmly walk back out, disappearing into the Manhattan din. The murder was never solved. And the old mob adage “an eye for an eye” went unfulfilled.

Revenge, deep-seated wounds, that agonizing cold case, and a mysterious series of small town murders all come to a head in the fifth hard-boiled Mancuso/O’Brian mystery - with a dash of international intrigue - when witty ex-cop Joey, with the help of his PI brother, Father Dominic O’Brian, attempts to track down his father’s murderer in Barcelona and Hilton Head, SC.

From tantalizing tapas near La Sagrada Familia to bourbon-soaked pulled pork sandwiches at a South Carolina B&B, murder couldn’t get any more flavorful - or more personal.

Armed with only those three words, and - true to form - with no plan and very little research, Joey flies straight to Barcelona. But what does a New York wise guy have in common with an investment banker?

Perhaps retired partner Alexander Wetherly has answers. But a peaceful Q&A on quaint Daufuskie Island turns murderous when the elderly gentleman who runs Joey’s B&B winds up stabbed to death. And this isn’t the first murder of its kind - it seems Daufuskie Island has a grisly and deeply-seated cold case all its own.

What listeners say about The Murder of Paolo Mancuso

the proper way to write mystery

I really enjoyed this book by Owen Parr featuring both Joey Mancuso and Father O'Brian. I loved the twists the book took. The author incorporated an old murder with a new mystery, exotic locations, and some endearing characters. I thought this story might be my favorite by the author. Fred Filbrich did a great performance with this book. I could hear who was speaking. I requested this review copy audiobook and have voluntarily written this review. I will definitely listen to more books by this author and narrator. Without giving away spoilers, I loved how the author tied things up with the ending.

I loved this book. It was provided to me as a free copy but I was not Obligated to leave a review.

All of the books in this series are great. The narration is excellent and adds to the story. There have been two different narrators and they were both good.

I Must Read More From this Author

This is the first of me reading a book from Owen Parr, however, this thriller mystery had me on my toes wondering what would happen next. I am most certain that his other books must also be this fabulous!. The narration made this such an easy listen to, where each voice, including the women, you could tell who they were. The quality was fabulously done, which made the book that much better. This book will have you scratching your head that the little twist within it. Enjoy!

The Series Just Keeps Getting Better

Another exceptional chapter in this remarkable series, this book will give you not one but two solved mysteries by the very likable New Yorker PI and his cast of fantastic characters. In an international chase to discover who's responsible for the death of his father Paolo, Joey becomes embroiled in a second murder mystery, which he's able to easily solve. Then it's back to Barcelona, New York, Casablanca, with stops here and there, until he can finally unravel the mystery of his father's death. Mystery solved and justice done. Now Joey can finally put closure to a traumatic period of his life and look forward to a future more promising than ever.
At the end of the book the author offers a sample of a second upcoming series, which promises to be as interesting as this one. I was so glad however to hear that this is not the end of Joey's and Father O'Brian's adventures... I would have missed them for sure otherwise.
What an exceptional writer is Mr. Parr... Looking forward to the new series and the continuation of this one. You must add this series to your reading list if you have not done so already. Better yet, listen to the audiobooks. As always Fred Filbrich's narration elevated the enjoyment of the story. What a match!

sometimes with these books i always feel like the killer was obvious. as i was reading this book there were no red flags that set off in my head which i think is a very positive thing. don't want to give away too miuch but i recommend this book.

The Murder of Paolo Mancuso. The best in the series so far, though I suspect Mr Parr will surpass this in future novels.
Well written and beautifully crafted detective mystery. 5* says all I need to say.
A great read/listen thoroughly entertaining and grabs you in the first chapter and never lets you go.
This audiobook is a great holiday gift for anyone who enjoys mystery/ detective novels.
I was given a free copy of this audiobook at my own request, and voluntarily leave this review.

I love this series!

What a great addition to the series. This book picks up shortly after the previous book in the series and with new information indicating it wasn't a mafia hit as he previously though he begins investigating what did happen. With more twists than a formula one racetrack this book took me on quite a journey.

I love the characters in these books, even having missed reading some of the series the characters still come a live in each book, their personalities and their opinions shine through and it just gets better with every new book in the series.

I never guess how these books will end and this one was no exceptions, and yet, I can always understand how all the clues planted throughout the book lead to the outcome.

Skillfully planned and beautifully written this books pages would turn themselves if I wasn't listening to the audio version.

Which leads me to the narration, naturally phrased, smooth and engaging the delivery was excellent. The character voices are beautifully done, clear, gender specific and easily recognizable.

Owen Parr at his Best !!

No spoilers here but suffice it to say I was totally suprised with the ending, and sad that it was over .. no disappointing with This high octane thriller.. Warning start reading early because it's totally engading and hard to put down... This is not my first from this author and won’t be my last.