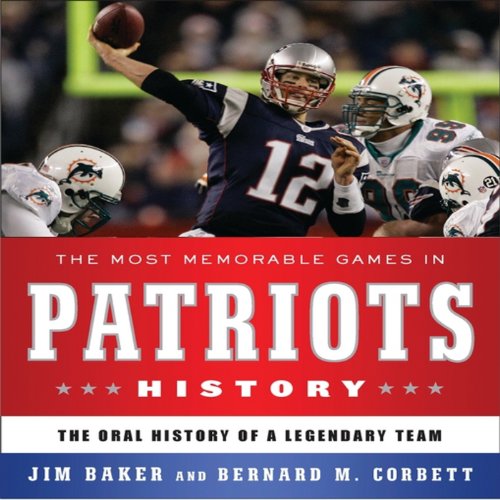 The Most Memorable Games in Patriots History

The Most Memorable Games in Patriots History

Tom Brady marching the team upfield in the final minute of the 2001 Super Bowl. Troy Brown playing offense, defense, and special teams. The Tuck Rule. A rogue groundskeeper plowing a path for kicker John Smith at the end of a scoreless, snowy game. Gino Cappelletti setting the AFL record for points in a game against the Houston Oilers. These are the moments Patriots fans love to remember, now retold by the players who lived them.

Once a top team in the AFL in the 1960s, the Patriots have returned to glory as one of the NFL's best franchises during the past decade, and enthusiasm for them has never been higher. Sportswriters Jim Baker and Bernard M. Corbett relive the evolution of the team, getting war stories from players like Cappelletti, John Hannah, and Steve Grogan. Moving through the team's biggest games, they put a fresh spin on the stories all Pats fans love, with detail and color from the players who were there, on the field, making history.

The Most Memorable Games in Patriots History is a perfect gift for the serious fan - not just a collectible, but the kind of book you can hunker down and enjoy.