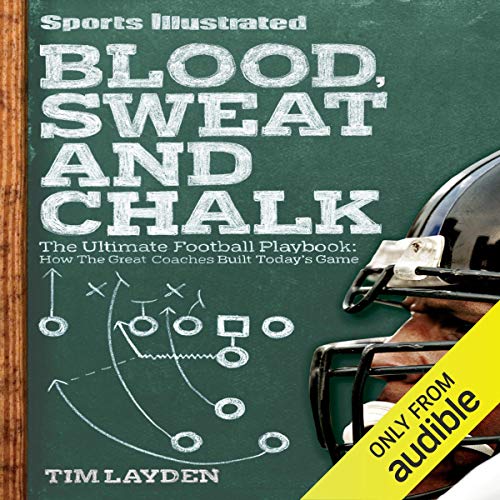 By: Tim Layden
Narrated by: Dennis Holland
Try for $0.00

The modern game of football is filled with plays and formations with names like the Counter Trey, the Wildcat, the Zone Blitz, and the Cover Two. They have become part of the sport's vernacular, and yet for many fans they remain just names, often confusing ones. To rectify that, Tim Layden has drilled deep into the core of the game to reveal how these chalkboard X's and O's really work on the field, as well as where they came from and who dreamed them up.

These playbook schemes, many of them illuminated by diagrams, bear the insignia of some of the game's great innovators, men like Vince Lombardi, Don Coryell, Tom Osborne, Bill Walsh, Tony Dungy, and Buddy Ryan. But football has also been radically altered by the ingenious work of men with more obscure names, like Tiger Ellison, Emory Bellard, and Mouse Davis.

In Blood, Sweat and Chalk, Layden takes readers into the meeting rooms - and in some cases the living rooms - where the game's most significant ideas were hatched. He goes to the coaches and to the players who inspired them, so they can tell their stories. In candid conversations with some of football's most intriguing characters, Layden provides a fascinating guide to the game, helping fans to better see the subtleties of America's favorite sport.

What listeners say about Blood, Sweat and Chalk

Where does Blood, Sweat and Chalk rank among all the audiobooks you’ve listened to so far?

It is a very visual book in my opinion, which is a downfall to hear it rather than read it. I enjoyed the history involved but I would imagine it would be so much better to read it.

hard to pinpoint one person or character, I really enjoyed the interaction with Don Coryell

I heard a couple of name mispronunciations...I can't remember what they were off the top of my head...but that is unacceptable

It would be hard to make a film about this book

not an all encompassing history of football but gave you a lot of interesting tidbits about how different teams rose and developed.

Needs a PDF For The Visuals But Its Good.

I own a physical copy. I bought the Audible version so I could multitask while listening. It is wonderfully read. I applaud Audible for deciding to create an audio version of the text. I would rather have it available than not, so I gave 4 stars. I do feel audible should add a PDF that contains the visual diagrams of the plays present in the book. Especially considering it's an Audible exclusive.

Just Listen To It

A must listen for all of those who love the game of football and sports.

A great listen, delving deep into the men who changed football and the systems they used to do it with.