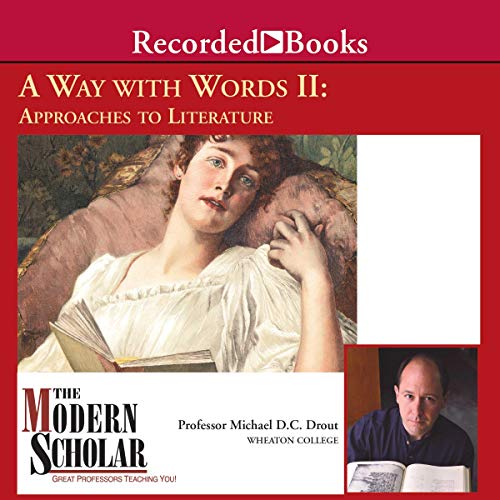 In A Way with Words: Writing, Rhetoric, and the Art of Persuasion, widely published professor Michael D.C. Drout embarked on a thought-provoking investigation into the role of rhetoric in our world. Now, in A Way with Words II: Approaches to Literature, the renowned literary scholar leads a series of lectures that focus on the big questions of literature. Is literature a kind of lie? Can fiction ever be "realistic"? Why do we read? What should we read? Professor Drout provides insight into these and other provocative questions, including those related to the role of the text, author, and audience in the reading process. Throughout, Professor Drout introduces the major schools of literary and critical thought and employs illuminating examples from the world's most important literary works. Literature contributes to our understanding of what it means to be human in a myriad of complex ways, and for all those who appreciate the role of literature in our lives, this course proves a wonderful exploration of one of humankind's most cherished pursuits.
Download the accompanying reference guide.
©2007 Michael D.C. Drout (P)2007 Recorded Books, LLC
World
Show more Show less

I have to agree with Jackson; not sure what that other reviewer is referring to.

These series of books have increased my awareness of literary constructs and rhetoric ten fold. Many favorite parts, but the chapters about Freud were captivating.

First, I want to say that Prof. Drout has the best voice and personality for audio books. He is energetic, funny, and his enthusiasm for the subject is contagious. I really wanted to like Part II of this series (I loved Part I.). Unfortunately, it wasn't quite what I expected.

Contrary to Part One, I found Part Two to be boring overall and I zoned out frequently. I did pick up some interesting information, and I even laughed a few times; however his constant use of unexplained terminology was frustrating and annoying. But, his great voice (I can't emphasize this enough) and personality kept me listening.

If you have ever taken college level courses on this topic (and enjoyed it), I would definitely recommend this purchase. However, if you are not familiar with the terms used in this area of study, you may be a little confused (and bored) at times. He explains some terms, but takes for granted that you understand others.

Last, I want to mention that I did like that he made references to Part One of the series. It helped to reinforce previous topics, and made everything feel cohesive.

I look forward to listening to Part III.

Beyond subject, Part II not much like Part I

I listened to Modern Scholar: Way with Words Part I: Writing Rhetoric and the Art of Persuasion, learned and enjoyed it so much, I planned to purchase Part II even before finishing Part I. While the subjects of the two parts obviously differ, unlike Part 1, I do not believe one can read Part II without a graduate degree background in literature and get a lot out of it. Who am I, a science major to critique a brilliant master of arts and letters such as Michael Drout. But, as a typical working stiff such as I, I can at least comment on what Part II had to offer me personally: not so much.

The lectures are somewhat abstract, often obtuse and, for me, lack cohesion. As Drout says, these lectures are not about the basics of plot or character development so much as about the relationship of literature to religion, politics, sexuality and other aspects of our humankind. For me, the theses took too much for granted about the background of the readers (listeners). For great stretches, the lectures were just so many words and often nonsensical. This manner is the antitheses of Part 1 in the series; or, perhaps I just knew more about the subjects of the former installment. Unfortunately, therefore, as much as I am a seeker of knowledge, I will probably not take the chance and spend my credit on Part III. I wish it were not so. I enjoy listening to Michael Drout and hearing his passion and enthusiasm for the subject.

Professor Droit has a good voice, an excellent style and an enjoyable sense of humor. He shares illuminating examples for the points he makes. The chapter on the literary canon was one of my favorites. His comments about Hemingway, Shakespeare, and Zora Neale Hurston were particularly interesting.

The Way with Words series is great! This one is my least favorite of the series but still worth the listen.

Made things much clearer for me

Recently I have listened to a lot of lectures about literary theory and this is the best one to date. It makes it much easier to understand the other lectures. Even Derrida gets an interesting treatment! Highly recommended. (note: I'm just an amateur in this field of study.)

Not enough emphasis on close reading of the texts

In my opinion, Drout puts too much emphasis on communication between the writer and his audience. In the Art of Reading by the Teaching Company authors are surveyed invariably say that they started with a question to be explored, not a plan for influencing the reader. He seems to leave accidents out of history and sticks to the history of literary criticism in academe, not how to form your own ideas as an involved reader. He merely nods to the reader while he explores academic debates that get pretty tiresome and redundant. I found this also to be true about his treatment of J.R.R. Tolkein. Rather than expostulate on a close reading of the text, or even limited exposition of the fantasy genre, we get the biography of Tolkein. Perhaps I was led astray, thinking this was a survey course that focused more closely on text, but such lingerings were few and far between. Authors, critics and university colleagues are the subject of this series, for anyone interested in that type of discussion.

Out of my league

I really like Professor Drout in the Modern Scholar series. I have listed to 4 or 5 of them. Of all of them, this was by far the hardest to listen to. But, I think it is probably me instead of the book. I never would have thought grammer would be interesting either, but that lecture was outstanding. Literature, I hoped for the same, but just couldn't get there. Again, maybe me. Try the history of the English language instead.

The truth about Lit Theory is that it is such a dull and obsessive subject that not even Michael Drout can redeem it. In fact, it seems that Lit Theory in turn demeans him, reducing him back to his English Study roots where one can only dissect and obsess and navel gaze without ever coming to the only thing that gives novels a purpose in this world which is story. Literary Studies exist for one reason only and that is to give professional critics a job. However criticism is an outdated system which you are undermining just by reading this user generated net review.

The only enlightenment to be gained from listening to this course is the explanation of major theories so that you can understand just how silly they are. You might toss a credit this way if you are very bored or very curious but do not pay full price by any means.

i havent listened to part 3 or 4. Maybe part 2 should have been last of the series.
because i really didn't think it was a special reading.

really about the only thing i got out of it were the names of great literary titles.

drout should have made this book the last in his series - as an optional reading - aimed at literature students.
Shouldn't have been placed as a stepping stone to get to the others books.

This course is about literary criticism and its different schools and theories. Actually it was not exactly what I expected. I think it should have been named "Understanding Literary Critics" instead of "Understanding Literature". There are many interesting ideas, insights and tidbits but in my opinion it lacks the narrative skeleton, especially in comparison with "The Way With Words, Part 1" which is devoted to rhetorics. But anyway, professor Michael Drout is such an brilliant lecturer and talker that I have come to the point when I would gladly listen to his lectures about anything, they are never boring regardless of the subject.

I’m at the end of doing a creative writing MA. I’ve got this book to be able to understand all the theories of literature and I’m not disappointed.
The writing is engaging and, at times amusing. Thankyou. Well worth the effort of listening.