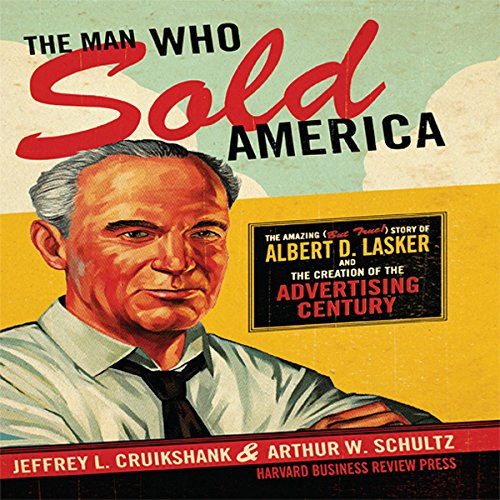 The Man Who Sold America

We live in an age of mass persuasion. Leaders and institutions of every kind - public and private, large and small - must compete in a rowdy marketplace of images and messages seeming to come at us from all directions - in print, on radio and television, and on the Web.

It wasn’t always so. In the early and middle 20th century, a handful of creative geniuses in advertising and public relations - J. Walter Thompson, Edward Bernays, David Ogilvy, Ray Rubicam, and others - launched their once-sleepy industries into the very center of American life. And most of them point to one individual as the man who started it all: Albert D. Lasker.

But Lasker - who resolutely hid from the spotlight - has remained an enigma. Now, Jeffrey Cruikshank and Arthur Schultz, drawing on a treasure trove of previously unknown papers, have written a fascinating biography of one of the 20th century’s most intriguing figures.

Lasker helped invent “reason why” advertising, market research based on direct-mail advertising, premium coupons, and a host of other industry innovations. He invented and promoted powerful brands that are still with us today: Sunkist and Sun-Maid, Kotex and Kleenex, Puffed Wheat and Puffed Rice, and many others.

But his impact went far beyond traditional advertising. Lasker was a crusader against anti-Semitism. A public-relations master, he engineered Warren G. Harding’s presidential campaign, and designed the strategy that ended Upton Sinclair’s bid for governor of California. And the Lasker Awards, for contributions to medical science, are sometimes referred to as “America’s Nobels.”

His personal life was no less dramatic. The Man Who Sold America recounts the powerful influence of his background, his deep friendships - and the debilitating depression he struggled with even as he forged his remarkable achievements. This is the story of a man who shaped an industry - and changed the way we look at our world.

“The Man Who Sold America is an intimate and unforgettable portrait of one of the most colorful, influential, and enigmatic Americans of the last hundred years: a human dynamo who left signature marks on the worlds of advertising, political campaigning, professional sports, and philanthropy. This audio book is indispensable to an understanding of how the world we live in came to be.” (Thomas K. McCraw, Pulitzer Prize-winning historian and author)
" The Man Who Sold America pulls back the curtain and shows us a remarkable life spent shaping much of the world we know today.” (Mr. Roman, former chairman and CEO of Ogilvy & Mather Worldwide, author of The King of Madison Avenue: David Ogilvy and the Making of Modern Advertising.)

What listeners say about The Man Who Sold America

In depth and takes you back in time

Any one who is interested in advertising or the history of marketing shaping our society the way is is currently should give this book a try.

It is very in depth, from the life of Mr. Lasker and how advertising’s impact on the economy, history, consumer behavior and politics. There should be parts in there that a broad range of audience finds intriguing.

From the beginning of industrial revolution to the guilted age and eventually to the post war era, the accounts are vivid. Obviously a lot of time and effort spent by the author.

The production and narration was good, until towards the end the audio was a bit scratchy, hence the 4 star in performance.

Come on Audible!! I expect everything to be perfect, just kidding, it was no big deal, no actual content was distorted, just some light hissing that sounds the aliens are eavesdropping.

It is just like Steve Jobs autobiography. Starts at very beginning and it is very detailed. Very easy to understand and put yourself in Lasker's shoes. Learned a lot and have new admiration for what he has done for marketing, advertising and even foundations.

The birth of modern advertising

What did you love best about The Man Who Sold America?

I actually really enjoyed this book. Working in the field, learning more about it modern beginnings was interesting. Many of the principles Albert used are still used today. I recommend it.

FYI, it is much more of a true biography than most books of this type

This book has stuck with me

Would recommend for anyone interested in American history. Fascinating birth of modern advertising told through this man’s biography.

Would you try another book from Jeffrey L. Cruikshank and Arthur W. Schultz and/or Walter Dixon?

Not what I thought, but worth a listen if youd in Jail with nothing better to do.

Meh. Didn't get much.

What disappointed you about The Man Who Sold America?

I listened to the whole book and I can't think of a single take away.

Has The Man Who Sold America turned you off from other books in this genre?

Would you be willing to try another one of Walter Dixon’s performances?

There are better advertising books out there.

I Thought This Was About Advertising?

So, the title sells, as advertising should. But after that, the book is so-so. Too much about politics an religious affiliations and not enough on actually how Lasker build the advertising trade...other than hiring a good copywriter.