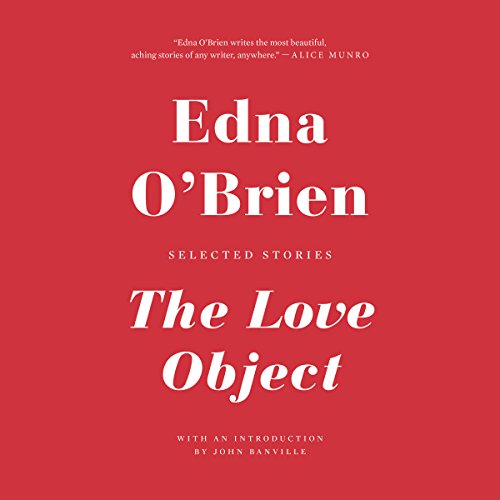 Collected here for the first time are stories spanning five decades of writing by the "short story master" (Harold Bloom).

As John Banville writes in his introduction to The Love Object, Edna O'Brien "is, simply, one of the finest writers of our time." The 31 stories collected in this volume provide, among other things, a cumulative portrait of Ireland, seen from within and without.

Coming of age, the impact of class, and familial and romantic love are the prevalent motifs, along with the instinct toward escape and subsequent nostalgia for home. Some of the stories are linked, and some carry O'Brien's distinct sense of the comical. In "A Rose in the Heart of New York", the single-mindedness of love dramatically derails the relationship between a girl and her mother while in "Sister Imelda" and "The Creature", the strong ties between teacher and student and mother and son are ultimately broken. "The Love Object" recounts a passionate affair between the narrator and her older lover.

The magnificent, midcareer story "Lantern Slides" portrays a Dublin dinner party that takes on the lives and loves of all the guests. More recent stories include "Shovel Kings" - "a masterpiece of compression, distilling the pain of a lost, exiled generation" (Sunday Times) - and "Old Wounds", which follows the revival and demise of the friendship between two elderly cousins.

In 2011 Edna O'Brien's gifts were acknowledged with the most prestigious international award for the story, the Frank O'Connor Short Story Award. The Love Object illustrates a career's worth of shimmering, potent prose from a writer of great courage, vision, and heart.

"The most striking aspect of Edna O'Brien's short stories, aside from the consistent mastery with which they are executed, is their diversity" (John Banville).

What listeners say about The Love Object

Painting the Inside: Love's "Reality"

You should read the trailblazing Irish writer Edna O'Brien, if you haven't. She was a pioneer in writing the uncensored and ungilded lives and inner thoughts of women, and, as such, a revolutionary in her native Ireland.

Educated as a pharmacist, she married a writer and moved to London. It was then, ironically, that she read James Joyce's A PORTRAIT OF THE ARTIST AS A YOUNG MAN, and decided she wanted to write. She came out of the gate, but good, at the age of 30 with the 1960 publication of THE COUNTRY GIRLS, the first of what's now known as The Country Girls Trilogy (1960-64). These books were banned, and even burned, in Ireland due to their vivid depiction of the sensual lives and thoughts of women (especially single ones).

Most of the tales in this volume of selected stories portray the inner thoughts and sensuousness of women, their strengths and flaws, primarily in relationships with men but also to other women. I found the title story the most notable in this respect, particularly considering when it was published (1968), in its vivid framing of the deliberations, imaginations and progressive deterioration of a woman infatuated, erotically hungry for, and ultimately obsessed with a married man.

Other stories show the savagery of some women, particularly in leading a collective (including gossipy men). In THE WIDOW, a young single lady named Bridget moves into town and rents out rooms in her home to pay the bills; the women (and men) refer to her at times by quoting a rhyming song that goes, "Betty the whore who lives in a house without a door." Bridget marries, and some years later, her husband drowns while out fishing. After a new man comes a-calling on Bridget, they fall in love and quickly get engaged, the townsfolk start rumors that her first husband committed suicide causing the fiance' to call it all off. Woe, insidious depredation by defamation.

As Hypocrites said, the "inside" is "where a person loves from," it's "the reality, not what they say." Edna O'Brien seems to capture where the woman loves from better than any writer this male has read.

wonderful writing and narration. truly moving. could listen to it again and again. Edna O'Brian is incredible.