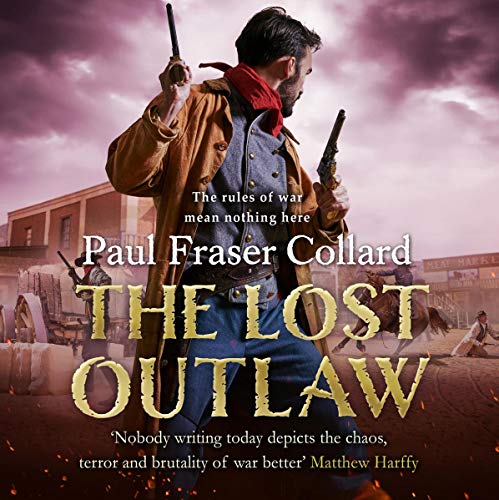 In the midst of civil war, America stands divided. Jack Lark has faced both armies first hand, but will no longer fight for a cause that isn't his.

1863, Louisiana. Jack may have left the battlefield behind, but his gun is never far from reach, especially on the long and lonely road to nowhere. Soon, his skill lands him a job, and a new purpose.

Navy Colt in hand, Jack embarks on the dangerous task of escorting a valuable wagon train of cotton down through Texas to Mexico. Working for another man, let alone a man like the volatile Brannigan, isn't going to be easy. With the cargo under constant attack, and the Deep South's most infamous outlaws hot on their trail, Jack knows he is living on borrowed time. And, as they cross the border, Jack soon discovers that the usual rules of war don't apply. He will have to fight to survive, and this time the battle might prove one he could lose.

What listeners say about The Lost Outlaw

The author is amongst the best in the world now.
A compelling story as always with great characters.
Like all great books , you feel a bit sad that it's over, but look forward to the next.

A very good easy listening adventure story.
Where will Mr Lark end up next ?

These books started out with an original idea and decent story lines, partly spoilt by the authors apparent lack of descriptive adjectives for the never ending line of 'beautiful women' he keeps meeting along the way. This book, however, I feel was lazy, constant descriptions of gore do not make up for a lack of plot - there are better western writers out there and this story was thin, even using a version of the Alamo, writ small, as a finale. The ending was predictable from the moment the 'baddy' made fun of Jack's sword. Sorry, really the author can and has done better. One final note, Jack seems to have become more stupid and less cunning as the books have progressed.