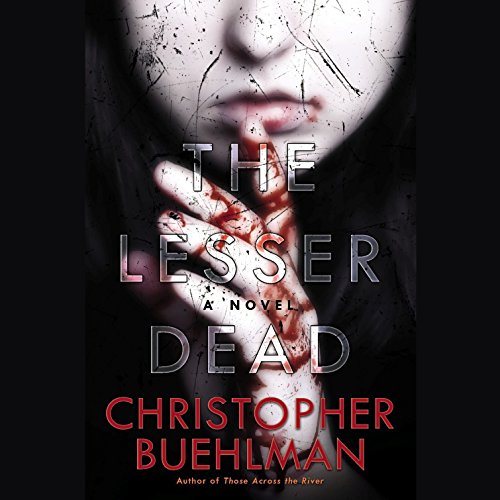 Christopher Buehlman excels in twisting the familiar into newfound dread in his genre-bending novels. Now the acclaimed author of Those Across the River delivers his most disquieting tale yet.

New York City in 1978 is a dirty, dangerous place to live - and die. Joey Peacock knows this as well as anybody - he has spent the last 40 years as an adolescent vampire, perfecting the routine he now enjoys: womanizing in punk clubs and discotheques, feeding by night, and sleeping by day with others of his kind in the macabre labyrinth under the city's sidewalks.

The subways are his playground and his highway, shuttling him throughout Manhattan to bleed the unsuspecting in the Sheep Meadow of Central Park or in the backseats of Checker cabs, or even those in their own apartments who are too hypnotized by sitcoms to notice him opening their windows. It's almost too easy.

Until one night he sees them hunting on his beloved subway. The children with the merry eyes. Vampires, like him…or not like him. Whatever they are, whatever their appearance means, the undead in the tunnels of Manhattan are not as safe as they once were.

And neither are the rest of us.

What listeners say about The Lesser Dead

Glorious, nasty reminder of why you fear the dark

Let me preface this by saying, as a general rule, I don’t “do” contemporary vampire novels. To be honest, pop-culture has all-but ripped the fangs out of vampires. Few and far between are tales of these monstrous masters of the undead that are actually visceral and scary. I want my vampires to be frightening. I don’t want to fall in love with them. I want to be afraid of them, in those little cowering monkey-places that keep me scared of the dark. I picked this book up on a recommendation and I’m glad I did. Simply put, it is my favorite book of 2016 so far, and in the vein of “scary vampires” it’s a triumph that does not disappoint. Now, the rest of the story…

I picked up a copy of “The Lesser Dead” on Audible Audiobook and not only was it my favorite novel of 2016 to-date, it’s also one of the best audiobooks I’ve listened to in years. The book is narrated by the author Christopher Buehlman, and in my experience, authors generally give mediocre performances at best as narrators. Not so with Buehlman’s performance of The Lesser Dead. His characterization and dramatic performance is absolutely first rate. I’ll be comparing other audiobook performances to this one for a very long time to come.

The story itself hit two personal home-runs for me right out of the gate.

First, the vampires were scary. Dark, hungry, scary things that lived and hunted in the shadows of New York. And much to my joy, the only got scarier as the book went along. Which, frankly, was a hell of an accomplishment on the part of Buehlman. More than that though, the characters themselves, the people they’d been in life and the creatures they became in undeath, they were refreshingly, and even at times, upsettingly real. These weren’t all pampered little whitebread vampiric offspring of thoughtful doctors and upper middle class souls. Most of them had raw, dirty, and utterly believable origins. Buehlman did a phenomenal job of bringing the lives they had lived (while living) into their existence as vampires in the underworld ruins of New York City.

Second, it was a period piece, and a masterfully done one at that, set in one of my favorite, iconic settings – 1970s New York. Buehlman’s narrative of New York was alive with the sights, sounds, and smells of the city’s late Sodom and Gamora period. The dirty New York from the ’70s people prefer to talk about in the past-tense.
Remember when I said that Buehlman’s vampires only get scarier as the book goes along? I mean it. Follow the blood flowing in the cracks and gutters to the very end, and I promise you, your skin will crawl while the Rolling Stones “Sympathy For The Devil” echoes in your head. Don’t trust the children…

A solid-gold 5 out of 5 star read. A glorious, nasty reminder of why you fear the dark…

Let's just start by saying that I rarely read horror, but I've seen the author perform many times and was curious to hear his narration preview on audible. After listening to the five minute sample I was completely hooked. I promptly exchanged my precious audible credit for the book and now, two days later, I'm finished and completely blown away. I would have completed the listen in one day, however it was dark and close to bedtime when I got to the most intense part of the book so I had to put it down to finish in the daylight.

This is the second book I've ready by Buehlman, the first being his freshman novel, Those Across the River. They are very different novels, with different time periods, different subject matter, but the consistent factor between the two novels is that he creates wonderfully nuanced, flawed characters that you love to listen to. Joey Peacock is our, admittedly very flawed, hero. He's a young looking vampire in New York in the late 70's, sleeping underground by day and feeding on New Yorkers by night. He's not apologetic, well, not much, and he's careful. He's got a circle of vampire friends, and a cadre of regulars he drinks from, his life is pretty uneventful. That is, it is uneventful until he sees the children on the train.

I don't want to go into too much detail, no spoilers here, but let me tell you that I was not able to sleep after listening to one sequence. I actually had to put another book on just to clear the very graphic, very terrifying images out of my head. This is not a sparkly vampire book, this is gritty, and good. Oh so very good.

Regarding the narration, I've heard a lot of self-narrated novels and I've disliked almost all of them, but Buehlman is the exception. In fact, I can't imagine another reader as the reading is masterfully done. There are characters of several ethnic backgrounds in the novel and his portrayal of them is perfect, from the terrifying Irish matriarch of the vampire clan to the creepy little English boy, Peter, each character is nuanced and well defined.

In conclusion, I highly recommend this novel to all who love horror or a good, creepy tale.

It will give you great nightmares!

This is another "killer" story by Christopher Buehlman! As has been his pattern so far, it is very different in flavor, though not in frights, from his past work. With Christopher Buehlman himself voicing the story, he pulls the reader into an underground view of New York City in the 1970s, bringing his characters to life with a flawless performance. The time period influences the characters, even if they themselves are not a part of that particular era. There are no "heroes" here, just the voice of a teen monster who is older than he seems. The overall story is a fun and scary ride, interspersed with comic moments, with enough twists to keep you delighted to the very end. It’s a fantastic, gruesome tale that will keep you turning the pages and sleeping with the lights on!

The ending is really stupid.

The story is very good and the production and narration very good. The ending, however, is incredibly stupid. Worse, the author thinks he is incredibly clever, even though the surprise is apparent about halfway through. There are ways to achieve the same result without being in your face insulting about to the reader. There is a difference between surprise and insulting. This is just insulting, and, it revels in the insult. A shame.

This book is remarkable.

Possibly one of the best genera books I have ever read. And the author should be commended for the quality of his narration.

Is it "Let the right one in?" No. Nothing can be. But it is easily that books next door neighbor.

I love this book, I've read it twice now! I gave a copy to my boyfriend and he and listened to it together.

I can’t think of any other writer who has such a extraordinary understanding of the nature of humanity. He has the ability to elicit deep and primal emotions through his writing, fear especially, which I have never experienced through this medium, nor did I really think it possible. And yet.
That being said, this of course, is worth listening to, several times over I think.
Also, his accents are top notch.

chistpoher buehlman should do this for a living if the writing thing doesn't work out.

Narrator has great accents. Helps bring life and credibility to the characters. Plot is slow to get going at first. But don't be fooled, there's a lot more going on both creatively and intellectually once it picks up. I thought the ending was great too,no idea why some reviews have a problem with it. It's very difficult to write interesting vampire fiction at this point in pop culture. It's realistic and believable without being boring, it's scary without being monotonous, and it didn't overstay its welcome. I'm glad I invited it in.

I loved everything about this book. Story moved fast without bogging down. Characters well formed. Wit that made me laugh out loud.
Entertaining but serious enough to keep me totally enthralled. Also, voice of reader was..great. I’ve turned off books because the voice was horrible. Not the case here. Great imagination. Great writing. Great voice.