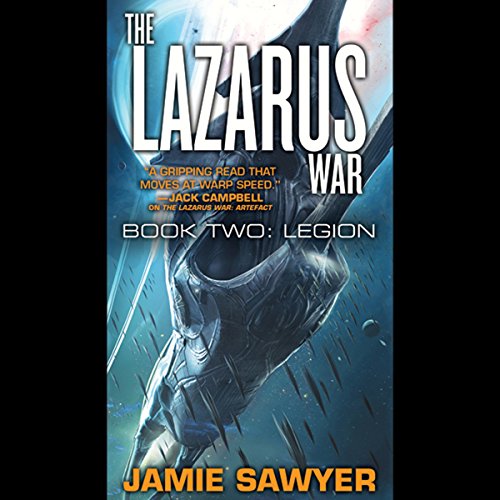 By: Jamie Sawyer
Narrated by: Jeff Harding
Try for $0.00

Following Artefact, Legion is the second book of the Lazarus War, an explosive new space adventure series from one of the brightest new stars in science fiction - perfect for fans of The Edge of Tomorrow, Alien, and James S. A. Corey's Expanse series.

Conrad Harris is the legend known as Lazarus, and he has died hundreds of times. Using simulant bodies, he runs suicide missions in the depths of space. But he always comes back.

As commanding officer of the Lazarus Legion, Harris and his elite Simulant Operations team are humanity's last line of defense against the hostile alien race known as the Krell.

Having survived their ordeal on Helios, they're now leading a large-scale mission to the perilous, unexplored region of the Damascus Rift. There, another Artefact has been discovered. It is the product of an ancient alien life form - and a possible weapon to be used against the Krell.

This Artefact could finally help humanity win the war. But what Harris and the Lazarus Legion will discover there is from their worst nightmares....

Discover the Lazarus War - the thrilling new space opera series of elite space marines and galactic empires, from one of the most exciting new voices in science fiction.

What listeners say about The Lazarus War: Legion

the ending was a little weak, but overall it held my interest. I recommend the series very highly it was an interesting take on military warfare of the future.

would be better if different narrator

the guy reading ended every sentence like it was a question. it got really annoying pretty quick but I struggled through because I enjoy the books

An amazing novel, so mysterious and intriguing I couldn't stop listening! The voice acting was incredibly in depth and moving. when there was action going on I had to stop what I was doing and hold on tight as the story played out! Highly Recommend!