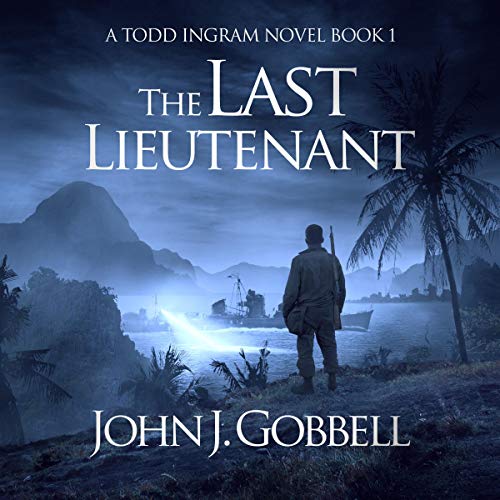 By: John J. Gobbell
Narrated by: Michael Wolfe
Try for $0.00

“Powerful and engaging. Truly an inspiring and emotional story of bravery and sacrifice.... a must read.” (Nelson DeMille, number one New York Times best-selling author)

Bataan has fallen to the Japanese. The Philippines seem sure to follow. When a general surrenders the last American outpost in the West Pacific, Navy Lieutenant Todd Ingram refuses to give up the fight.

Taking to sea under cover of darkness, he leads his ten man crew to accomplish the impossible: Slip through Japanese naval blockades, travel 1900 miles to Australia, and singlehandedly stop a ruthless Nazi spy.

There are no reinforcements. There will be no rescue.

And if Todd fails, he won’t just lose his crew.... He’ll lose the woman he loves, too.

In the heart-pounding tradition of Ken Follett's Eye of the Needle comes a thriller brimming with raw courage, non-stop action, and an unforgettable villain.

Praise for John J. Gobbell and The Last Lieutenant:

“There are no greater tales of epic combat than the fight for Corregidor and the Battle of Midway. John J. Gobbell masterfully combines them into a gripping war story that will be considered a classic in the decades to come.” (Clive Cussler)

"Gobbell has, for me, personally resurrected the novel of World War II in the Pacific, combining thriller with war novel. [The Last Lieutenant] calls up memories of The Naked and the Dead and James Jones. A first-rate accomplishment." (Thomas Gifford)

What listeners say about The Last Lieutenant

ten out of ten would recommendations

this book is action packed and full of suspense. looking for more from the series from audible.

This is a great story, well researched, about a Navy officer who escapes from Corregidor in the opening days of WW2. The book would benefit from more editing as there are a number of long passages that make the story drag and add little to the plot.

My primary objection is that the narrator has horrible problems with Navy terms and cannot even pronounce non-military words like conflagration and telegrapher.

If this is a series, I'll give the author a chance to tighten up his style and to please find a better narrator.

While the storyline was good, the narrator mispronounced many common words and many more military abbreviations. I would recommend skipping the Audible version and read the book.

How could anyone pull for a group of soldiers who disobeyed orders and other soldiers would have been murdered for it? When they fought with boats and even killed Japanese soldiers after the US army chain of command had already surrender don't you know the Japanese soldiers would have executed US soldiers because of the betrayal. For that reason, and it's supposed to be true there was no way I could pull for soldiers who would kill other US soldiers to help themselves. The narrator is ok except he makes everything sound like something desperate is happening like saying there getting a glass of water. I'll send the book ack and find a story about the heroes that followed orders and didn't sacrifice their fellow soldiers.

It took me a while to settle into this book. The narrator’s strange, strangulated voice detracted from my enjoyment. This was not helped by woeful mispronunciations of Chinese, German and even English words (I do not know enough Japanese to comment further). Does anybody edit the narrator?
The storyline is predictable but of course there are real events highlighted here.
It is a tale of derring do but I felt somewhat detached. Being British, maybe I found some of the narration a trifle cringeworthy. I do not want to criticise the brave soldiers who fought at Corregidor but some of this was too homely for my liking. I will still have a look at Book 2 and assess it but my score should really be a two and a half stars.