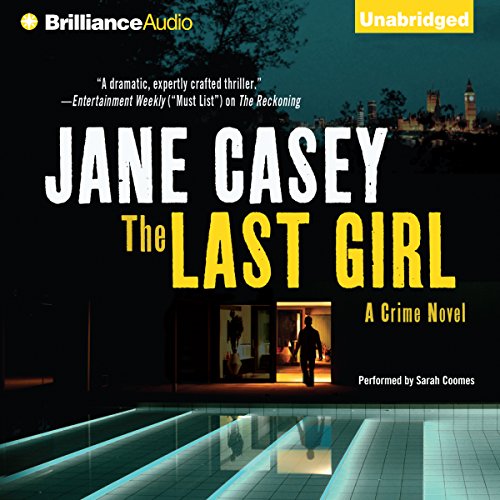 Vast wealth offers London defense attorney Philip Kennford a lot of things: a gorgeous house with a pool in the backyard, connections in the top echelons of society, a wardrobe worthy of Milan runways. But his money doesn’t provide a happy marriage, or good relationships with his twin daughters...and it does nothing to protect his family when someone brutally murders his wife and daughter in their own home.

When Detective Constable Maeve Kerrigan arrives at the scene, the two survivors - Philip and his second-favorite daughter, Lydia - both claim to have seen nothing, but it’s clear right away that this is an unhappy family accustomed to keeping secrets. Maeve soon finds herself entangled in a case with a thousand leads that all seem to point nowhere, and it doesn’t help that her boss, whom she trusts more than almost anyone, is starting to make decisions that Maeve finds questionable at best.

In The Last Girl, Jane Casey once again demonstrates her ability to write vivid, three-dimensional characters and spin a gripping, unpredictable mystery.

"Maeve Kerrigan [is] a fascinating and plausible character.... What she has is persistence, integrity, and emotional intelligence, and a very deft way of insinuating herself into a reader’s affections." ( The Irish Independent)

Half a family is killed in a bloody violent attack. The mother and one twin daughter are slaughtered. The father is struck on the head and left unconscious. The other daughter discovers the bodies and calls 999 before collapsing. Detective Constable Maeve Kerrigan and her superior DI Josh Derwent arrive on the scene to help with the investigation.

Digging into the details of the lives of Philip Kennford, his wife Vita and their two daughters reveals an extremely dysfunctional family. Kennford, a criminal lawyer, has enemies both among his clients and the victims of clients he has represented. He is also a philanderer and a less than than admirable family. Vita is willing to take any action to keep her marriage intact.

Meanwhile story lines from earlier books in the series concerning Maeve's relationship with another member of the force and the struggle between a jailed mob leader and a rival weave their ways through the plot. These plot strands are the reason I suggest that a reader go back to the first book in the series and read forward.

I found this entry in the series better written than the first book and I'm looking forward to the next one.

The narrator is quite competent and easy to listen to. I have no complaints about production values.

What happened ? this is a train wreck

I really enjoyed the first two books then this one came along and boom....thud...splat! Every single character is angry, bitter and the narrator makes them all sound like little point brats. I cannot imagine the author actually believes everyone in the serious crimes squad actually speaks to each other like this let alone to the public.

I would recommend the print version. It's a good story with interesting characters and an intricate plot.

Having read Jane Casey's first two books and really liked them I decided to listen to this one. The other two had a serious and slightly dark mood. The narration in this tends toward the stereotypical and lends a comical air to the book. Many of the characters' voices sound like creaky doors and are distracting and annoying. It's too bad because I'm not really enjoying the story.

Good story but the narration detracts

I have read 2 other books in this series, all read by the same narrator. In the other 2 the narration was good, not great but it did not detract from the story line. In this book the narration, in particular the accents and intonations were so overdone as to be annoying at best and cringeworthy at worst.

Not the best one in the series

Would you try another book from Jane Casey and/or Sarah Coomes?

Yes, I did really enjoy the first two, and I will happily listen to the others, but there were a few times I had to push my observations about the obviousness of the story and shoddy police work to the side in this one and I'm REALLY hoping it improves.

I would have not dropped the answer to the entire mystery when and how the author did, so obviously, and given her main characters so little credit as to completely dismiss what any detective (presumably) worth their salt would have jumped on in a hot second. The end was completely predictable and the result of rather shoddy police work. I have noticed this author allows her detectives to make fairly silly assumptions in order to propel the story rather than find a clever way to make the assumption feel more like an astute observation...disappointing.

Which character – as performed by Sarah Coomes – was your favorite?

She does Maeve and Rob the best. Though sometimes I thought Rob didn't quite sound himself...

Could you see The Last Girl being made into a movie or a TV series? Who should the stars be?

Not a movie, maybe a series.

I liked the first two, so I'm giving her a pass on this one, but as a woman, I would suggest a female writer give her heroine a BIT more credit, and stop slagging all the men as well. Derwent gets a totally bad rap, I can't tell if the author is the type of person to overreact to things or if the Derwent character is just underwritten... or if Maeve is just supposed to be really uptight...and I want to enjoy their interactions more as it feels like there could be a lot of fun to be had there. Also ...NO one would let some of the things go these detectives do, much less an actual detective. It gets to be predictable, trite, and grating at times. That said- I still listened to and mostly enjoyed the story even if I saw the end coming a mile away and I had to roll my eyes and groan a couple of times.

I was so annoyed with the reader could barely keep up with the story. Every sentence doesn't have to be laced with irony.

I really do like Maeve Kerrigan and the team she works with as well as her romance with Rob. I do think Maeve is a little odd in that she doesn't trust Rob to really love her and even when DI Derwent is being nice, she doesn't really give him credit.

I WANT to listen to the last couple of books in this series. I REALLY hope Audible brings them SOON!!!!

the book was good but the reading of it was confusing at times. Miss Combs sometimes made the voices of the men and Maeve sound too similar... I have to really focus on the content just to tell the difference between Derwin and the superintendent. But once I got the hang of that it was okay. The storyline was longer than others, but it's still good and engrossing. I enjoy learning different terminology that comes from our English brothers and sisters. And I feel like if I visit London anytime soon, I'll know my way around! The plots left us wondering who the killer was... But after I got to a certain point I started to suspect who it was and I was right. It just seemed possible after a while; especially after one certain clue... But I think you'll be able to figure it out too. Overall, the book was really good and the performance, though confusing, was still decent.

This entry in the Maeve series falters. It is lengthy for no good reason, wordy, wordy, with words like Autumn leaves - an unending
dumping blowing back , forth, all
around, jeez! Get on with story
I find myself thinking, then she does and more pieces from the life of a young, female police murder invedtigator slide into.place and I'm looking for the next Jane Creasey book.