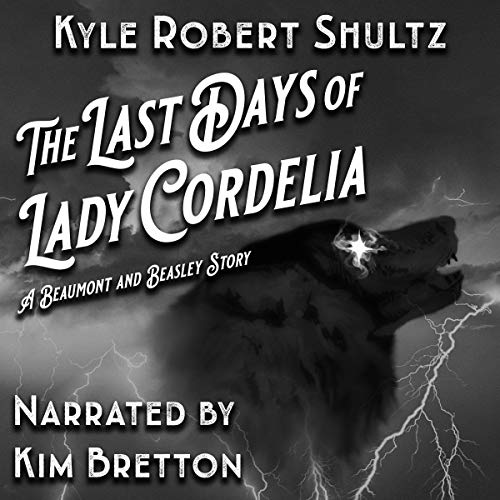 The Last Days of Lady Cordelia

By: Kyle Robert Shultz
Narrated by: Kim Bretton
Try for $0.00

A thrilling story from the world of the acclaimed Beaumont and Beasley series.

Lady Cordelia Beaumont is dying. That’s what her mysterious nurse tells her, at least. Even worse, her magic powers have abandoned her, her friends are missing, and her whole world has completely changed. Everyone around her is insisting that magic and fairy tales aren’t real. Even the name of her city is different. She’s not in Talesend anymore - she’s in a place called London.

Cordelia is determined to return to her own reality, but dark forces are working against her. An old friend may be able to help, but he doesn’t remember who she is.

Who are the Neverwolves? What is the secret of the Shadow Parallel? And how can Cordelia use magic to escape from a world where magic doesn’t exist?

Please note: This novelette is set between the second and third books of the Beaumont and Beasley series but contains no spoilers for events beyond the end of the first book, The Beast of Talesend. It's best enjoyed by people who have already read or listened to the first book.

What listeners say about The Last Days of Lady Cordelia

a brilliant tale of magic that kept me enraptured and wanting more. Hats off to the excellent narration as well

I've read this story several times and am a big fan of Kyle's works. It was fantastic to hear this story brought to life! The voices were perfect!

Another excellent book by Kyle Robert Shultz! Cordelia’ voice is excellent! I like how he just jumps right to the point and still kept you interested even though you were confused why her father was nice! And the fact that you were able to see other versions of Nick and Crispin is awesome!

And the fact that Crispin is a drunkard is funny! You would never expect that to be him. If anyone you’d expect it to be Nick.

I really enjoyed this story. There is a certain level of...cheesiness? Theatricality? That is so charming, that I cannot get enough of it. But it doesn’t take away from the depth of the characters, which is even more brilliant.
I am a fan!

Hearing this book read is like finding an old friend in disguise. I've not had the pleasure of reading this before, but I love the B+B series and all Kyle's stories and hearing the voice actor's artistic take on this was wonderful. So good I listened to it on the way to work, on the way home, and then sat in the dark for 45 min or so to finish it. I love all of it.

Twisty Novella in a Great Series

I’m a big fan of the Beaumont and Beasley series. I loved all the twists and turns this story takes in a novella.
Without spoiling anything, I enjoyed a couple of familiar characters who play a bittersweet role. Lady Cordelia really shines in this story!

A fun side story to an excellent series.

The Last Days of Lady Cordelia is part of the Beaumont and Beasley series. It takes place at some point after the first book but before the third. I believe that this book could be read in it's own, as this is a side story and has little effect on the continuity of the main series.

As a huge Beaumont and Beasley fan I will take any stories I can get to pass the time between books. But this novella gave me something I didn't know I wanted. Adventures in our world.

Cordelia wakes up in a London Hospital and everyone is telling her she's mad. Will she ever get back to her world, or is she really just insane? what about Nick Beasley?