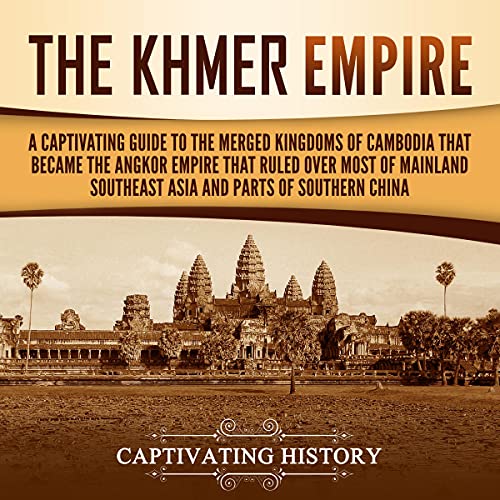 Did you know that at its peak, Angkor was the largest city in the world, almost the size of a modern metropolis, maybe even comparable to Los Angeles?

The Khmer Empire was the greatest player in the political and cultural world of medieval Southeast Asia. Its capital city and greatest legacy, Angkor, was built in such a way that one side was protected by the Tonle Sap Lake and the other three sides by the wild jungle. Its surroundings were hostile, but they offered protection. A series of well-built highways connected the city with other important settlements and port cities, which the Khmer used for trade.

The Khmer Empire embraced Hinduism, and it produced the monument temples that still stand today. They are often compared to the great temples of the Roman Empire, and the artists who worked on their decorations are referred to as “Khmer Michelangelo". The king was respected for his divine connection with the gods, and the unique ideology of kingship among the Khmer was probably what made the empire so great.

In this audiobook you will learn:

Buy this audiobook now to learn more about the history of the Khmer Empire!

What listeners say about The Khmer Empire

Between the 9th and 15th-centuries, the Khmer Empire was powerful. The elites tended to be Hindu, while the common people tended to follow Buddha. Cambodian lands were midpoints between the trading countries of China and India, and they reaped benefits from trading. Little is known about the Khmer Empire; some of the kings are completely forgotten and some just left scores of temples, statues, inscriptions in stones, and public works.

Angkor, when discovered in the 19th-century, it wasn't recognized for what it was, Yasovarman's temple mountain. Every level, tower, stairway, and statue refers to a sacred symbol in Hinduism.  Phnom Bakheng built two hundred years before Angkor Wat was the astronomical calendar, built of brick and stone.

Angkor Wat covers some 402 acres.  Portuguese and Spanish explorers described Angkor in their visits. But it wasn't until the French rediscovered the magnificent site that money was spent to excavate and study the amazing temple. Fortunately, UNESCO named it a World Heritage Site in 1992 and it continues to draw scholars and visitors from around the world. Such a marvelous place couldn't have been created without a powerful kingdom, to provide the manpower and money for the magnificent edifices.

Jason Zenobia is a wonderful narrator; he has a clear and engaging speaking voice. He has a great command over the unique Cambodian city names and family names.