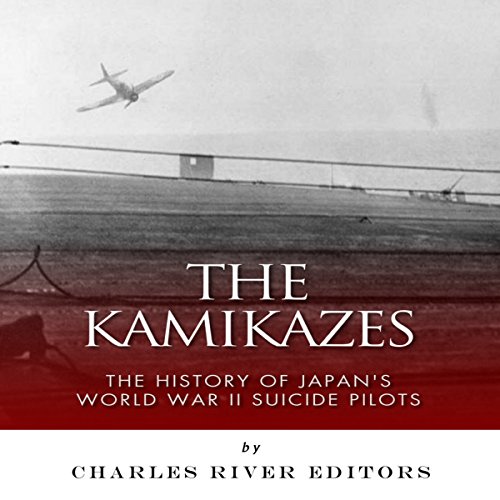 By: Charles River Editors
Narrated by: Stan Chandler
Try for $0.00

One of the most fascinating aspects of World War II was Japan's use of suicide pilots known around the globe as kamikazes, though the Japanese referred to them as Tokubetsu kōgekitai ("Special Attack Units"). Translated as "God Wind", "Divine Wind", and "God Spirit", kamikazes would sink 47 Allied vessels and damage over 300 by the end of the war, but the rise in the use of kamikaze attacks was evidence of the loss of Japan's air superiority and its waning industrial might. This method of fighting would become more common by the time Iwo Jima was fought over in early 1945, and it was especially prevalent during the invasion of Okinawa in April 1945. The "privilege" of being selected as a kamikaze pilot played directly into the deep-seated Japanese mindset of "death before defeat". The pilot training manual assured each kamikaze candidate that when they eliminated all thoughts of life and death, fear of losing the earthly life can be easily overcome.

Still, not all cases of those chosen to be kamikazes were equally noble. Recruits were trained with torturous regimens or corporal punishment, and stories of mental impairment caused by drugs or saki abound. Some were described as "tottering" and dazed, being carried to their planes by maintenance officers, and forcibly pushed in if they backed down. Pilots who could not find their targets were told to turn around and spare their own lives for another day, but if a pilot returned nine times, he was to be shot. At the moment of collision, he was instructed to keep his eyes open at all times, and to shout "Hissatsu" ("clear kill").

The Kamikazes chronicles the history of Japan's famous suicide pilots and explains when, why, and how Japan resorted to their use near the end of war.

What listeners say about The Kamikazes