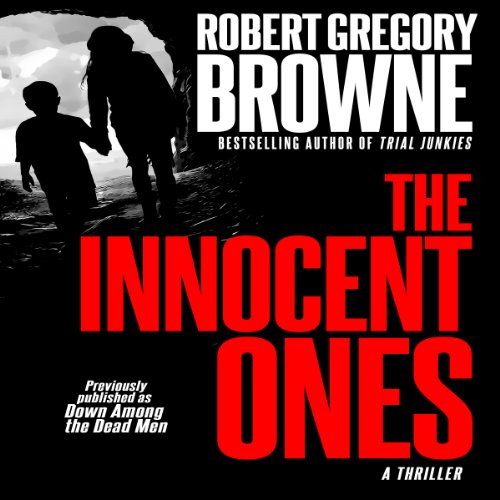 By: Robert Gregory Browne
Narrated by: Scott Brick
Try for $0.00

From the best-selling author of Trial Junkies - get ready for a jaw-dropping twist...

Assistant District Attorney Beth Crawford and her sister, Jen, take a much needed vacation in Baja California, but the fun in the sun doesn't last long when Jen disappears without a trace on the streets of Playa del Sol. Now Beth must navigate the underbelly of a city she doesn't know, and the only one who can help her is Nick Vargas, a disgraced newspaper reporter on the trail of a dangerous and deadly cult with big plans for its annual celebration...on the Day of the Dead.

What listeners say about The Innocent Ones

Would you try another book from Robert Gregory Browne and/or Scott Brick?

Has The Innocent Ones turned you off from other books in this genre?

if the genre is lascivious, then yes

Yeah, there should be an X reading on this! None of the sexual nature of the book was revealed by the sample or the description or the few commentaries I read. After listening to a couple hours I checked further reviews to see that the book only gets worse. I thank those others for the warning and deleted the book. At least it was on sale, but I don't even want it in my library.

Another winner from Robert Gregory Browne

What made the experience of listening to The Innocent Ones the most enjoyable?

This was a very good fast paced listen. Two stories going on at once that converge about midway through.

This is my 4th consecutive RGB book, I think I'm hooked. This is a really good story, no supernatural in this one but plenty of action and deceit. A few surprises towards the end (I've noticed this author likes doing this). The kind of ending that leaves you with a slack jaw and that's just when you think you have it all figured out. As always Scott Brick gave a fantastic performance.

Slow story that took a left turn into the absurd

What disappointed you about The Innocent Ones?

It's just too silly. It started out with a mildly intriguing set-up - typical sisters with their typical issues on a cruise together - then one disappears and it seems like the story will just be about a dangerous search for a missing woman in a foreign country with shady characters in the wings….but…..then, the story took a psychedelic turn and, frankly, I 'mentally' skimmed from thereon - it just didn't hold my interest. I finished it, on principal. But I was literally cleaning the kitchen for the last two hours of the book - mindless, boring work, and I still had a VERY difficult time focusing on the book because it was so silly I just couldn't buy in.

What could Robert Gregory Browne have done to make this a more enjoyable book for you?

Been WAY more consistent with character development; and, for that matter, not relied so heavily on stock characters. The last 1/3 of the book was just gruesome jack-in-the-box - no lead-up, no foreshadowing - he just decided spring a bunch of weird stuff for effect.

I know lots of people like Scott Brick; I'm just not one of them. I have listened to hundreds and hundreds of audio books and been an audible listener for well over 10 years - so I have listened to Scott Brick's development as a reader. While I do not care for his performances, I do think he has improved as a reader and so, while I don't find his reading among my favorites, they don't grate on me as much as they once did. And, let's face it - he reads a lot of the books on Audible, so there's no escaping him. I think of him as the Howard Cosell of audio performers - and not in a good way. His delivery is on par with Cosell's - over-the-top, unnatural, with a touch of snide and sarcasm. In the case of this book - his performance neither added nor detracted from the story.

Disappointment. The book just took a nose dive half way through.

I'd never listened to this author before but I try to find readers I enjoy and Scott Brick is the narrator. What a pleasant surprise. I found the suspense riveting, a book that I didn't want to stop listening to so I found things to do that would allow me to continue listening. I'm going to check now to see what other books Browne has written. While there were a couple of small moments when I wished the protagonist would quick thinking about something and do something instead overall the book is well written and there was never a moment I could figure out what was going to happen next.

One of the greatest

Would you consider the audio edition of The Innocent Ones to be better than the print version?

I would not know

I enjoyed Beth. She was a survivor and cared for her family. She could be hard-nosed, yet compassionate.

This man is the most awesome story reader that I have had a chance to hear.

This is the first book that I have read by this author. He has made my top five most favorite authors.

Has The Innocent Ones turned you off from other books in this genre?

No, just turned me off for this author. Wait a sec ... is this gore and sex actually a "genre"?

Who would you have cast as narrator instead of Scott Brick?

Almost any other narrator. Brick has this annoying trait of over-dramatizing things. Like trying to sound as if pulp fiction like this actually has something moving and compelling to say. Might work once in a while but he reads every paragraph as if it was from a radio soap opera ... within paragraphs he raises his voice higher up the scale and louder for each phrase. It doesn't help things that the story is mostly third person, and his reading makes an already terrible story start to take on the affect of a really bad Shakespearian stage production. This all comes to a head in the closing scenes, in which you'll marvel over pinpoint aim with Molotov cocktails from far away just as the sacrificial pyre is to be lit . It's enough to make you go lock yourself in the bathroom and slit your wrists. (I guess our author thought "fighting fire with fire" was quite the twist.)

The story has a good gripping start as far as the male protagonist (Vargas ) is concerned. The two female leads are, sadly, pathetic right from the get-go. Beth - allegedly the "strong" Asst. District Attorney - first wanders around the cruise ship as an asexual mother figure for her ungrateful, wanton sister, who soon disappears. About halfway through the story - and it's a long and painful slog - she finally teams up with Vargas - who, of course, falls ludicrously in love with her and they have (as does the main bad guy) the most fantastic sex, many times a night. Spoiler: As a small example of just how bad this tale becomes, along the way she is shot two times in the chest, once in the brain, knocked in the head into unconsciousness at least three different times, physically assaulted a couple of times, raped repeatedly, tied up with rope and/or duct tape a couple times, and set up to be burned alive. And, not to be undone, Vargas and the sister also experience a similar hard row to hoe of torture and beatings, along with the killing of numerous nuns, prostitutes, and other loyal bad guys. If you like this kind of claptrap, then this is the story for you. You have been warned.

I struggled with this story

What can I say? Where should I start? This was a weird story with several twists that got even weirder and at the end, it just left me with an ugly feeling. I got this on sale and I'm glad I did or I would've requested a refund. The narrator was great but that was the only good thing about this audiobook I enjoyed

Fabulous story line. interesting, exciting. With every turn a new plot, yet all connected in the end. A definate thriller

A disgraced reporter needs a new story to pick up the pieces of his shattered career. Plagiarism, fraud and addiction to prescription meds can be hard for a newspaper man to recover from.

He happens upon word of a missing American in Mexico, and smells a story, and a cover-up. That is where his trouble begins, and he witnesses movements of dangerous men.

Several stories intertwine, and finally resolve in a mostly satisfying conclusion (if not slightly predictable). There are moments of brilliant writing throughout, most notably the moment where a main character is hit on the head and suffers a concussion. remember the writing here! if you choose to read this novel.

If this description sounds like your cup-of-tea, you will likely enjoy this well-written novel.

Narration by Scott Brick is solid.