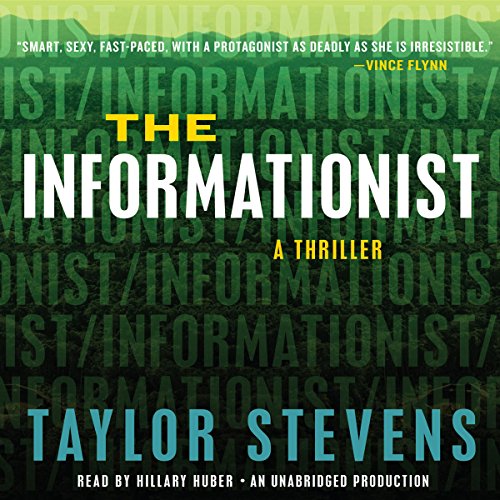 Vanessa “Michael” Munroe deals in information - expensive information - working for corporations, heads of state, private clients, and anyone else who can pay for her unique brand of expertise. Born to missionary parents in lawless central Africa, Munroe took up with an infamous gunrunner and his mercenary crew when she was just fourteen. As his protégé, she earned the respect of the jungle's most dangerous men, cultivating her own reputation for years until something sent her running. After almost a decade building a new life and lucrative career from her home base in Dallas, she's never looked back.

A Texas oil billionaire has hired her to find his daughter who vanished in Africa four years ago. It’s not her usual line of work, but she can’t resist the challenge. Pulled deep into the mystery of the missing girl, Munroe finds herself back in the lands of her childhood, betrayed, cut off from civilization, and left for dead. If she has any hope of escaping the jungle and the demons that drive her, she must come face-to-face with the past that she’s tried for so long to forget.

Gripping, ingenious, and impeccably paced, The Informationist marks the arrival or a thrilling new talent.

“Stevens’s blazingly brilliant debut introduces a great new action heroine, Vanessa Michael Munroe, who doesn’t have to kick over a hornet’s nest to get attention, though her feral, take-no-prisoners attitude reflects the fire of Stieg Larsson’s Lisbeth Salander….Thriller fans will eagerly await the sequel to this high-octane page-turner.” ( Publishers Weekly)

What listeners say about The Informationist

I started listening to The Informationist while taking the train home on a Friday – usually the time I close my eyes and unwind after a full week. But this time my imagination was captured by Taylor Stevens’ tough-as-nails, mysterious new action heroine: information specialist Vanessa “Michael” Monroe. Some say her character is a bit over the top – too much of a butt-kicking Angelina Jolie – but what I find most interesting about her is Stevens’ own cult history past woven into Monroe’s intimate knowledge of the wilds of Africa. Hilary Huber’s cool and sultry tone fits Monroe’s character, and I’m looking forward to more from them in The Innocent.

The book sets a great atmosphere and the protagonist is initially captivating. The narrator does a good job and the book despite it's flaws is entertaining until it becomes laughable in the end. A fitting description might be Terminator melts into Romancing the Stone.

The flaws:
The book repeatedly pulls it's punches. The lead is always "about" to get violent, but keeps warning people not to mess with her instead. The action takes a nose-dive while the protagonists wrestles with school-girlish issues of love. All but one of the potential villains have less than a page of character development in the entire book making them irrelevant to the reader. Despite the title, it is never demonstrated that the main character has any particular ability to obtain or analyze information. Her only ability in this regard seems to be that she grew up in Africa and knows the lingo. To add insult to injury the character to be rescued becomes an unimportant afterthought and the main character decides that embarrassment might be punishment enough for the people who tried to kill her and her friends.

The bottom line is that the author set out to create a Lisbeth Salander like character with no idea of what motivates such a character and little idea of what the genre expects. The extreme weakness of the protagonist at the end (i.e. indecisive, illogical, passive, and naive) would make Jack Bauer and Mitch Rapp hurl. And back to pulling punches, the author blends three different endings together instead of choosing a solid one. It's akin to "It's okay that I let my son's killer go free, because he died in a car accident a few weeks later."

Why is this the Audiobook Tournament?! Terrible!

I really wanted to like this book and I would say I enjoyed it for the first half of the book, but, it took a turn for the worst somewhere. The main character has too many skills and her flaws are her actually psychological problems. In other words, she is very hard to relate to, sympathize with, root for, insert whatever else that a reader feels for her main character. Don’t get me wrong, I like strong female characters as much as the next person, but I struggle with calling her strong female character. She is not strong but overpowered.

Vanessa Michael Monroe has the ability to extract information from what often seems like thin air. She uses her many skills and does whatever is necessary to learn what she needs to for her clients. Sounds cool so far, right?

Well, my issue is that Michael has too many abilities that enable her to obtain this info. She can fight with guns, knives, her hands, can kill, speak 20 something languages, obtain fake ID’s and passports in whatever country she’s in, ride a motorcycle from Dallas to Colorado Springs, disguise herself as a man, dodge the many bullets that are fired at her in this book, survive in the jungle for a couple of days with no shoes or food, get our of handcuffs by dislocating her thumb, survive almost drowning with a boat anchor tied around her feet, and I could go on. She’s also moody, mentally unstable, untrusting, manipulative, all while having multiple lovers. Personally, I’m not really sure what the guys really saw her.

Overall, this was all just too much for one character. It wasn’t believable and started to get funny after awhile. To describe Michael and develop her character, the author uses many chapters. In my opinion, many of those chapters could have been cut out and the book still would have been long. I wished the author would just pick a few things and be done with the character development. Your character doesn’t have to do and be everything. I will admit Michael did show weakness from time to time and I was grateful when she did. It showed she was human.

Another challenge I had with this book was the violence. I normally can stomach violence (I enjoyed Girl with a Dragon Tattoo) but this book made me a little queasy. I wished there was some warning before I bought the audiobook saying, “Warning: This book contains violence, sexuality, and sexually related violence.” I still don’t know if that would have warned me enough. It was too much for me and I kind of wish I could ‘unhear’ this book.

I won’t be reading or listening to another Vanessa Michael Monroe book. She’s not my type of heroine and Steven’s stories are just not for me.

The main character is an Angelina Jolie, kick-butt, type, which is okay but the whole thing came off as forced. Trying too hard. A different narrator may have made the story better but even the story itself didn't hold water for me. The romance between the main character and her mentor falls flat, the terrible accent of the narrator plus the monotone she uses made this hard to finish. By the end, I didn't care what happened to the person they were searching for.

I kept waiting for this character to have a personality! Completely unbelieveable - she's superhuman, super sexy and super smart and honestly, super boring. Comparison to Lisabeth Salander? Please! That's an insult to a great character and a truly good book. After the impersonation of a man, I finally quit listening. I have no idea what happened and I don't even care. Wish I had my money and my time back.

This book has me rolling my eyes and cringing a lot. Stevens has made a dumb imitation of lisbeth salander in his main character. The writing is often hokey and the characters are two dimensional. Save your credits and listen to the "Dragon Tattoo" trilogy again.

I needed distraction and I got it!

I generally don't like spy thrillers. Of course I loved The Girl with the Dragon Tattoo because I just got sucked in, but mostly I avoid them unless I am in an airport, forgot a book and am going to be on a plane.

This is an exception. It is so tightly written and the protagonist multi-dimensional that I extended my exercise to keep reading it. It is a compelling story and has enough twists and turns that you are never bored. I highly recommend it as a sort of cracker in between classic novels.

Really? Winner of the annual Tournament ?

I bought this book because it beat out many of my favorites to win the annual audiobook tournament, so I expected to enjoy it. I am always willing to suspend my disbelief for a good yarn, but this author simply asks too much. Vanessa Michael Monroe's character is never fully developed, and despite her stellar talents and complicated past, she is simply not very likeable. What drives her? A female Jack Reacher she is not. Reacher is motivated by a deep internal ethic. Monroe seems mostly motivated by money and individual power and achievement.

This book could have been a very different listen with a different reader. Listen carefully to the words and imagine them as written. The reader's flat, ironic, breathy voice is, to me, an unwelcome presence in the book. I can see that Hilary Huber has a long list of audio performances. I will avoid all of them.

I understand that we all have different tastes in books, and I applaud our diversity as a group of listeners. Perhaps I should have read more of the reviews before I impulsively spent a credit. I'll be more careful in the future.

Hardly a thriller...predictable from the outset

No comparison to Lisbeth Sander's complex character, nor story. Morgan, and the story are both predictable and lame. The reader made the story read like a romance novel rather than a thriller...I listened at double speed just to slog through.

I got this for a long drive and was looking forward to the return leg to hear the rest of the book. A lot more depth of character and unforeseen twists than with the Reacher books. Really enjoyed it and was quite disappointed to find out this is the only one! Hope Taylor Stevens keeps writing.

Great Audio book to listen, this is my first experience with Listening Audio and I am now hooked with it

I love strong female characters and this is just the kind of book I devour. The story rocks along at a good pace and is set in interesting parts of the world, but the lead character is totally unbelievable and ruins the book... Worshipped like a god, learns a language fluently in a week... and if that's not good enough, her knife skills are apparently better than her startlingly impressive linguistic abilities!! Why?? It was not necessary!!

The story was reasonably well written and had a good storyline, but was ruined by the laughably preposterous main character!! Shame, could have been great!!

The reviews indicated an equalling thrilling story to match the King book. I didn't think that either the story was as rivetting as 11,22,63 and the narration definitely didn't equal Craig Wasson's. Maybe it's just me!

An entertaining read with lost of action and plot twists. Nice to have a woman in charge!