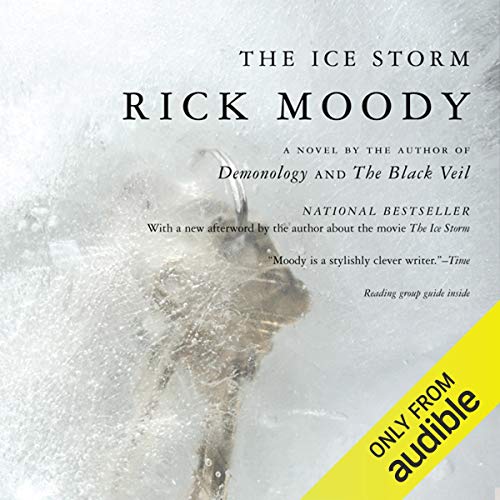 By: Rick Moody
Narrated by: David DeSantos
Try for $0.00

The year is 1973. As a freak winter storm bears down on an exclusive, affluent suburb in Connecticut, cars skid out of control, men and women swap partners, and their children experiment with sex, drugs, and even suicide. Here two families, the Hoods and the Williamses, com face-to-face with the seething emotions behind the well-clipped lawns of their lives-in a novel widely hailed as a funny, acerbic, and moving hymn to a dazed and confused era of American life.

What listeners say about The Ice Storm

A Stark and Dormy Night

Some things work in audio, some don't. The Ice Storm works. Well. The narrative voice, paraphrasing what its characters are saying and thinking rather than quoting them directly via dialogue, makes it quite a good listen. I had originally tried reading the book in print but had difficulty getting into it. Just 30-40 pages in, I lost the book, and I did not rush out to replace it. When I had a chance to get the audio edition, I thought it might be a better listen than a read, and that proved to be true. That the narration is good helps, of course, but what I'm really referring to is the author's narrative voice, especially as he shifts his perspective among the four Hood family members and occasionally throws in his own personal musings.

My favorite character in The Ice Storm is 1973. The human characters are not exactly charismatic, not likable in any sense. They are interesting but they are too damaged and dysfunctional to relate to. But the setting is as much a character as the characters who people that setting -- New Canaan, Connecticut, on Thanksgiving, 1973. The tony suburban setting is crucial to where the characters are at the start of the book and where they end up after the events of the day (and night). But place is secondary to time -- 1973. If America "lost its innocence" in the wake of the Kennedy assassination in 1963, a decade later, in the wake of Nixon's Watergate scandal and the arrival of the sexual revolution in a buttoned up suburb, America's jaded and browbeaten heart and soul have completely frozen over.

I started college in the fall of 1973, leaving home at 18 to navigate a world in which a presidency was killing itself off with hubris, a world began its long slow burn with the oil embargo that followed the Yom Kippur War, my crime-ridden city (New York) was on the verge of bankruptcy (both literal and metaphorical), and culture was in the last stages of abandoning the utopian ideals of the 60s in favor of the dissolute self-absorption of the "Me Decade". I remember it well. Too well. Not very fondly. Rick Moody uses that moment in American social, cultural and political history, lashed both literally and metaphorically by a deadly ice storm, to recount the demise of the American family, both literally and metaphorically.

My favorite passages in the Ice Storm were the ones where the narrator steps away from the point of view of a particular character and riffs on a particular cultural element of the era -- politics, style, music, TV, comic books, religion, et.al. Had the book been written contemporaneously with its era, these references would surely feel dated. But looking back two decades, during its writing in the early 1990s, the commentary benefits from hindsight, from treating its material more as historical or cultural artifacts, as sociology.

Then there is the movie. Director Ang Lee is highly acclaimed for blockbusters like Life of Pi, Brokeback Mountain and Crouching Tiger, but before that he made small family-oriented films, of which The Ice Storm was the last. My memory of that movie made me want to read the source novel. The book has a different feel, with so much more interior monologue, the movie distinctly visual in style. Both are excellent in their own media, if you like it (my wife didn't like the movie, hated it in fact, and therefore has zero interest whatsoever in reading or listening to the book).

I've had this one on my to-read list for over five years - the story of a single New England night in 1973 in which an ice storm descends and changes the lives of a group of mixed-up humans doing their best to make a go of it. Now just to be clear - it isn't all about the storm. The storm just comes along and weaves its way through the plot. Think, perhaps, of the rain of frogs in Magnolia, as a comparison. I didn't make a firm count, but I think we spend time with roughly six characters during the novel, whom Moody presents to us cloaked in a wise omniscient narrative voice. With this narration, I was reminded of Ann Patchett's Commonwealth, and also, strangely, of George Elliot's books - she was a big proponent of that "eye of God" looking bemusedly over her characters. The Ice Storm finds some middle ground between humor and drama, which is, I think, where most of life takes place. I enjoyed the story a good bit - liked the tapestry of characters, the messiness of their lives and their desires. There's a great deal of sexual activity and sexual thinking - much of it quite unique and interesting. Wendy was my favorite character - as complex a young woman as I've ever run across in literature. You never hear about this book being mentioned as anything special - like "classic" special, and I'm really not sure why - what it is about the writing that holds it back from packing more power or staying with us as readers - and I guess I come back to that narrative voice, which is the heart of the prose, but conversely, holds it back in some way from conveying the emotion of the characters more potently. Or perhaps too many cultural references? I don't know - we Americans are pretty culture-obsessed, so I couldn't tell after a while. All that being said, there are some brilliant passages that I wish I could share a few of here, but they involve a particular plot point that needs to remain hidden. RECOMMENDED.

I bought this audiobook after recently watching the film on TV, hoping that the book would be better than its film adaptation, and I wasn't disappointed. This is one of the best books I've downloaded for a long time. The narration is excellent and the atmosphere created in this tale of dysfunctional families, a misguided sexual revolution as well as the nuanced character studies are brilliant. I can really recommend this to anyone looking for a more unusual read and a glimpse in to the heart of moral darkness.