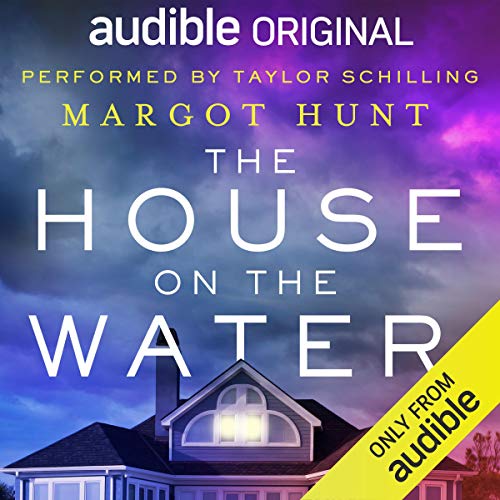 The House on the Water

By: Margot Hunt
Narrated by: Taylor Schilling
Try for $0.00

From the author of Buried Deep comes a brand-new thriller about a summer vacation turned deadly and a group of friends trapped together until they can determine who among them is capable of murder.

Every year, Caroline Reed takes a trip with her best friend, Esme Lamont. They’re usually accompanied by their spouses - but this year, everything’s changed.

Esme has just gone through a bitter divorce, and Caroline is wondering if her own marriage is reaching its breaking point as she and her husband, John, cope with the discovery that their 19-year-old son has been abusing drugs. Still, the inseparable duo books a weeklong stay at a beach-front home in Shoreham, Florida, inviting Esme’s brother, Nick, and his new husband, Ford, in hopes that the additional guests will help lighten the mood.

After a blissful first night in the vacation home, tragedy strikes, and one of the houseguests is found dead. While it’s assumed at first to be a horrific accident, it quickly becomes clear that there’s something more sinister at play, and over the course of this fast-paced, deeply chilling novella, the potential motives of each guest are revealed - until a shocking conclusion is reached.

Margot Hunt is a USA TODAY and Amazon.com bestselling author of three novels and the Audible Original Buried Deep. Her debut psychological thriller, Best Friends Forever, which examines the complexity of female friendships against a backdrop of duplicity, was heralded as a "cleverly constructed thriller [that] kept me guessing until the very end" by Peter Swanson, and her second novel For Better and Worse was called the "best thriller of the year" by Book of the Month. The Last Affair, Hunt’s latest novel, explores an extramarital affair that ends with the murder of one of the cheated upon spouses. Learn more at MargotHunt.com.

Taylor Schilling is an Emmy and Golden Globe nominated actress best known for her starring role as Piper Chapman in the Netflix original series, Orange is the New Black.
Recently, Schilling appeared in the Hulu anthology thriller series, Monsterland.
Schilling is set to lead in the new AMC hour-long animated primetime drama Pantheon, alongside Rosemarie DeWitt, Aaron Eckhart, and Paul Dano. Schilling will also star in the Spectrum Original’s series, The Second Wave with Audra McDonald.
In 2019, Schilling starred in Orion Pictures’ horror thriller, The Prodigy.
Schilling appeared in the Film Arcade indie comedy, Family, which premiered at the 2018 South by South West Film Festival. Schilling also starred alongside Alec Baldwin, Jena Malone, Christian Slater, and Gabrielle Union in the Emilio Estevez-directed drama, The Public, which premiered at the 2018 Toronto Film Festival.
In 2017, Schilling starred in Take Me.
In 2016, Schilling completed production on The Titan, opposite Sam Worthington and Tom Wilkinson.
In 2015, Schilling also appeared in Patrick Brice’s The Overnight, alongside Adam Scott and Jason Schwartzman. The film premiered at the Sundance Film Festival, the South by Southwest Film Festival, and the Tribeca Film Festival. Earlier that same year, Schilling completed her limited engagement run in the Classic Stage Company production of A Month in the Country, opposite Peter Dinklage.
In 2012, Schilling starred opposite Ben Affleck, Bryan Cranston, and John Goodman in the Academy Award winning film Argo. Earlier in 2012, Schilling starred opposite Zac Efron in Scott Hicks’ highly anticipated Warner Brothers film The Lucky One, based on the Nicholas Sparks novel.
Taylor grew up in Massachusetts and graduated in 2006 from Fordham University with a Bachelor of Arts in Acting. She then studied acting in New York University's Graduate Acting Program.
She lives in New York City.

Featured Article: The Best Vacation Listens for the Dwindling Days of Summer


Warm days and lazy afternoons—there’s nothing like summer vacation. And unwinding on the deck, beside the pool, or on the beach with a good audiobook is simply one of life’s greatest pleasures. As autumn rapidly approaches, we’ve been trying to squeeze in just a little bit more summer before the leaves begin to brown. There’s still plenty of time for enjoying a vacation—and finding the perfect listen to accompany you!

What listeners say about The House on the Water

LADIES, TAKE A LISTEN. This is so good!

I thoroughly enjoyed this. Yes, it’s short, but it has all the elements of a good story with a very satisfactory ending. The characters were so well developed in a very short time that I could picture every one of the five main characters clearly in my mind. The narration was excellent. Perfect for this story. I listened straight through. I’m not going to leave any spoilers as I get so annoyed when other reviewers do that. This is a really interesting listen for women. I don’t believe men would particularly like this. Ladies, take a listen! It’s so good!

The story had a great plot!! I didn't expect it to play out like it did!! I definitely will recommend to others!!

This short story was gripping and threw so many curve balls and subtle hints along the way the finally unexpected ending seems a relief. Great read! Could read it again and again!

Sometimes you just need a quick read that keeps you company but also entertains. I loved this book all the way to the end. Performed brilliantly.

kept me listening till the end to see who actually did it. I would recommend

The narrator didn’t use different voices to distinguish the characters, which makes the dialogue really confusing!

Definitely a good beach read. Short and easy listen. The narrator’s voice is top notch. Slipped right into their world and sat in the corner as it all played out. Not too much time spent fleshing out character or relationships, but just enough. Perfect to listen to while I remodel my basement.

Another great novella by Margot Hunt!

Margot Hunt may be my newest favorite author with another tantalizing and surprising end too!

The story is okay, but it suffers from ‘lazy writing’. One of the most important things in a ‘whodunnit’ is a writing trick called ‘hiding the gun’. It gives readers the very subtle hints that they could use to potentially figure it out. This book had none of that and the killers behavior was therefore rather odd. A real shame because this let the whole story down. The killer suddenly had a Jeckyll and Hyde moment at the end and it felt a bit cheap. Otherwise it was pretty entertaining

The House on the Water

Wow, what a book! Would never have guessed the ending! I just wanted it to go on forever. Will definitely be reading more from this author. The narration is excellent.

This wasn't a bad story, just a bit predictable. The narrator sounded like she was half asleep and being forced to read a story she wasn't interested in. She was also way too young for the character.

I very much enjoyed this short book. It was fast paced with some good twists and turns. Also, enjoyed Taylor Schilling’s narration.