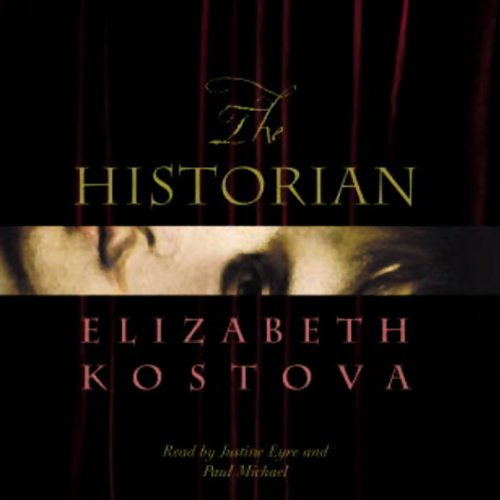 By: Elizabeth Kostova
Narrated by: Justine Eyre,Paul Michael
Try for $0.00

Late one night, exploring her father's library, a young woman finds an ancient book and a cache of yellowing letters. The letters are all addressed to "My dear and unfortunate successor", and they plunge her into a world she never dreamed of: a labyrinth where the secrets of her father's past and her mother's mysterious fate connect to an inconceivable evil hidden in the depths of history.

The letters provide links to one of the darkest powers that humanity has ever known, and to a centuries-long quest to find the source of that darkness and wipe it out. It is a quest for the truth about Vlad the Impaler, the medieval ruler whose barbarous reign formed the basis of the legend of Dracula. Generations of historians have risked their reputations, their sanity, and even their lives to learn the truth about Vlad the Impaler and Dracula. Now one young woman must decide whether to take up this quest herself, to follow her father in a hunt that nearly brought him to ruin years ago, when he was a vibrant young scholar and her mother was still alive.

What does the legend of Vlad the Impaler have to do with the modern world? Is it possible that the Dracula of myth truly existed, and that he has lived on, century after century, pursuing his own unknowable ends? The answers to these questions cross time and borders, as first the father and then the daughter search for clues, from dusty Ivy League libraries to Istanbul, Budapest, and the depths of Eastern Europe. In city after city, in monasteries and archives, in letters and in secret conversations, the horrible truth emerges about Vlad the Impaler's dark reign, and about a time-defying pact that may have kept his awful work alive down through the ages.

"A bloodthirsty delight....Both literary and scary, this one is guaranteed to keep one reading into the wee hours." (Booklist)
"Along with all the fascinating historical information, there's also a mounting casualty count, and the big showdown amps up the drama by pulling at the heartstrings at the same time it revels in the gruesome. Exotic locales, tantalizing history, a family legacy and a love of the bloodthirsty: it's hard to imagine that readers won't be bitten, too." (Publishers Weekly)
"The Historian is artfully constructed and atmospheric." (Washington Post Book World)

Featured Article: 10 Best Vampire Audiobooks to Suck You In


Vampire stories have fascinated people across cultures for generations. From gothic Transylvania to modern Seattle, it seems like vampires have taken every form in every culture and every country around the world. From all of these options, we’ve selected the best audiobooks from the pack: those with the most captivating characters, creepiest settings, and, perhaps most importantly, the best vocal performances available.

What listeners say about The Historian

This is a pretty good story with a wonderful, complex setting and one of the best narrations I've ever heard.

The story begins slow and hokie, with an uninteresting mystery concerning blank books, and while the characters and the mystery develop and become both enchanting and entrancing, the central hokiness of the premise is hard to set aside. That's why I rated four instead of five stars. The story fulfills enough other promises to transcend those flaws, though.

The charming characters and epic mystery drive this book through incredible settings, each recreated with an intimate feel that makes you overlook the unlikely justifications for getting you there. The language and scholarship is stately and impressive, yet you feel the cushions in the Turkish parlor as one character sinks into them with the relish of a homesick traveler. From American university libraries to churches in isolated villages in Cold War Bulgaria, each place, each era, each character feels genuine. You will at times wonder how the author knows something, how long she must have lived, where all she must have traveled.

And the narrators are some of the best I've heard. They recreate a range of accents and character from Scottish to Romanian, yet they master each, almost as actors interpreting a script.

All in all, this is a wonderful listen, and I've been scouring Audible since hearing it trying to find something that comes close. Easily my favorite Audible purchase. If you are looking for a great epic with strong settings and characters and an interesting tale that rises above its simple plot, give this one a listen. It will immerse you in a world that will be hard to leave once the story ends.

Another entry in the genre I like to call "DaVinci Code-esque" in which a nerdy researcher-university type gets caught up in international intrigue while following a variety of research clues that make some nefarious person want to kill them. Throw in the Dracula legend and you have The Historian. Not as frenetically paced as other novels in the genre, it managed to include enough details of vampire lore without leeching the life out of the story and enough details about the characters' inner lives to make it more than a typical adventure story.

The author is good enough to be able to move her plot between several timeframes decades apart without making the book hopelessly complicated. This sometimes overused device works well here to maintain suspense and drip clues to the reader drop by bloody drop.

I enjoyed my audiobook version since I didn't have to carry around this 700+ page behemoth, just load it onto my phone and listen to the wonderful narrators as I took my morning exercise walks through the woods.

I LOVED this book. It is chock full of historical detail, which, I believe, took the author years to research. The multi narrator format took a little getting used to. I wasn't crazy about Joanne Whaley's voice; it grates on me. It's worth persevering, though.
A few pointers:

*If you're looking for a "vampire" book, beware. The book is more focused on the history and activity of Dracula than on a bloodsucking rampage.

*If you are bored by detailed descriptions of places and history, you probably want to read the abridged or skip the book altogether.

*If you have difficulty understanding foreign accents, beware. There are many nationalities depicted in the book.

*If you're expecting an action-packed plot twister, this isn't your book.

*This book was made to be savored, not gulped down.

While I generally believe details to a large degree build the realism and believability of a story, this one got to be tediously detailed at times. And the depiction of the vampire, which started out scary finally became so hokey it was laughable. So I give it a three. But its non-linear construction is engaging and the characters are compelling and sympathetic. I would recommend it as an interesting, though flawed, literary work.

When I bought this book I was very sceptical. The story of Dracula has been told and re-told, filmed and re-filmed over and over. What would be left to tell? Well, this book for instance. It tells the old bloodsucker's story in a more modern content and with well developed characters. Even the character of Dracula becomes more complex and interesting than the well-known movie vampire. The alternation of readers/actors between a male and female voice makes it a way better than average listening experience. Even though it is a rather long book it never becomes boring. I will try to read more books from the author.

Could not put it down, listened every chance I had, on my Zen at work, driving, eating, where ever! Not too long or laborious as some of the reviews say. It all had to be said to understand the work, without all the descriptions it would have been hard to see the places in your mind. I hope her next is just as good. I will keep this one. In a few years may read again.

The Historian has exactly enough action to keep you interested, exactly enough detail to make it rich, good, solid writing and a complicated and well-developed plot. It's interesting in the beginning and becomes enthralling as it progresses. The readers are great. This book is really worth your time. LIstening to it certainly made painless the mindless labor which of necessity occupied my body while my mind was wandering with the characters.

Great narration, great(er) story. I hope the author writes more, my only disappointment was in finishing this one and finding out this is the only book she has listed. I've been a audible member for 3 years and this is my favorite book so far. (I missed a lot of subway announcements, train stops, beggars, thieves, and co-workers due to my inability to pull out my headphones ).

Granted, it started out a little slow, and if you are looking for horror a la Stephen King or Dean Koontz, you won't like it. If you liked the treasure hunt aspects of the Davinci Code, you'll love The Historian.

This story is intricate and has about 4 levels of stories within stories and some of it is very ancient, and I personally could not put it down (stop listening, rather). I have no idea whether any of it is accurate or is even supposed to be, but it is fiction and the author weaves a very good story. Not terribly frightening, but definitely eerie. I can see how others might find it too long, but I was sorry to see it end.

I would love to see more stories like this one, weaving ancient legends with historical events and secret societies leading into the modern.

The Historian kept my commute almost enjoyable for at least a few weeks!

can't stop listening even at 2 a.m.

This book held me spellbound for hours every day that I listened to it. I was skeptical of all the
"vampire-hype" books- but this was a gorgeous aural surprise.
Characters were so well written and the journey of the book was truly gripping and well written!
Highly recommended by a friend- I will always heed her recommendations.