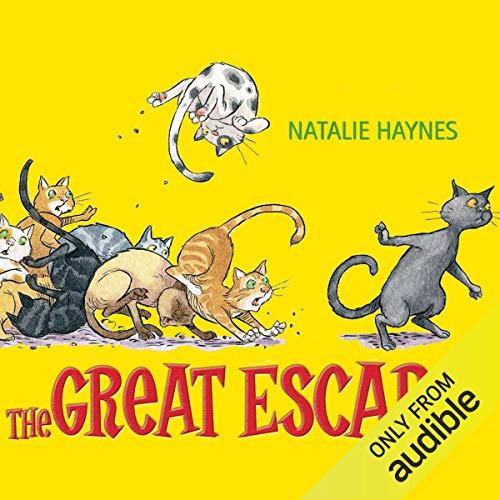 By: Natalie Haynes
Narrated by: Suzy Aitchison
Try for $0.00

It's the summer holidays and Millie's bored stiff. Every week, she has to clean windows with her dad at a nearby laboratory. But she's sure something weird is going on inside. Then, one day, a cat comes hurtling through the lobby and asks her for help.
©2007 Natalie Haynes (P)2014 Audible, Inc.
Literature & Fiction
Show more Show less

What listeners say about The Great Escape

Heavy-handed with the "sermon"

Being anti-animal testing is great. It is a good stance to have.

Well, at the halfway point through the book, (2:41:46), I had decided I hated this book. And it would have gotten one or no stars except that I liked Max the Talking Cat (not giving away anything there, since the book description tells us that a cat "asks" for help) and the 9-year old computer wiz, Ben.

The author needed to make a greater effort to follow the "Show Don't Tell" rule -- to make her point about being anti-animal testing. The story plot and the characters could have pulled off getting that point across in a much more subtle way.

I'm an adult to whom many people might say I'm too old to be listening to kids books. But I love them. Many are so much more inventive than the ones written for the adult audience. And I have two special young friends who read almost as much as I do (in fact, I think one may devour just as many or even more books in a year than I do!) ...
They would agree with me that the heavy-handed handling of the anti-animal testing would keep them from recommending the book to their friends.

Think "101 Dalmatians" -- Was there any overt anti-fur statement in that book or the various movie adaptations? No.

The last 2:41:32 of the book was more action related. However, one character, Ben, the computer wiz, is also a bit of a hacker. Um ... should an author of children's books be condoning hacking and photo-faking? It would have been better if the info the kids gathered was through further sneaky activities (like how they got hold a huge trove of emails) or through legitimate internet searches rather than actual hacking -- especially since the author is also heavy-handed with "teaching" all about internet- and computer-safety concerning passwords and the like.

Most people want to read fiction to be entertained not "taught." Now, if teaching occurs, fine, but I don't want to be aware that the author is really trying to make me "learn" this stuff or share a certain opinion. Subtlety, even when writing for a younger audience that may not do as much abstract thinking as adults or teens do, has got to be better than the sledgehammer approach.