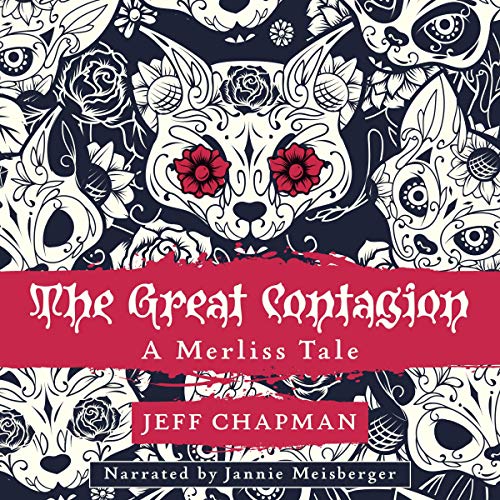 By: Jeff Chapman
Narrated by: Jannie Meisberger
Try for $0.00

Plagues kill in more ways than one.

Merliss is no ordinary cat. She's far more. She's a young girl's spirit trapped in a cat's body. While the magic that banished her has snatched away her human speech, it has given her a life spanning millennia. For centuries she has lived with the cunning folk, assisting their efforts to heal the sick and ward off malevolent creatures. Now, a bleeding sickness has thrown the community into chaos.

The cunning man and his apprentice are in danger from the disease. The life Merliss has worked so long to build is in jeopardy. Before she entered the cat, she had trained to be a shaman. Do her centuries of experience hold a secret to a cure? But disease isn't her only nemesis.

A pair of malevolent creatures move into the neighborhood, threatening more havoc. Merliss and her cunning partners face more challenges than they can handle. But the greatest threat to Merliss' survival may be the ignorance of terrified people looking for a scapegoat.

What listeners say about The Great Contagion

I received a complimentary copy and am voluntarily leaving a review.

Merliss is a cat. But far from being an ordinary cat. She lives in the body of a cat and has lived a life that has covered many lifetimes. She lives in a time when, unbeknownst to people, magical creatures roamed the land in various forms and guises. Her spirit is bound to a cat, gifted with soul-sight, the ability to read another’s soul through their eyes, albeit cursed with not being able to communicate verbally with humans. After living with many ‘cunning people’, she currently lives with her herb-master, Hailaird, and his apprentice, Fendrel.

Unfortunately, a lethal illness is roaming the area, claiming all in its path. Hailaird and Fendrel are duty-bound to do their utmost to discover a cure before the populace is wiped out. Hailaird succumbs to the contagion while Fendrel is still an apprentice. Merliss must apply all her wiles, utilising her instincts to assist him and fulfil her oath in helping and healing.

The Great Contagion by Jeff Chapman is a prequel to Cat Sidhe. When I initially read that the protagonist was a cat, I couldn’t wait to discover how this was going to be portrayed. Merliss is described with such detail. She knows the secrets and the area she dwells in better than any other human or creature could remember. The author has created a novel of creative fantasy, of water goblins and enchanted forests patrolled by the Old Gods. With magical elements that include several scenes of a darker nature lending a sinister touch, Jeff Chapman has created an intriguing and enjoyable introduction to what will be a wonderful series.
The cover is striking and depicts Merliss perfectly. It gave me the urge to crack open pencils and colour it in!

In the audio version, Jannie Meisberger brings Merliss and her companions to life brilliantly! Her tone is beautifully descriptive, evoking sights and smells; her narrative indicative of intelligent cat behaviour.

Worthy of 5 stars and can’t wait to discover more!

This was my first experience with Jeff Chapman's work and I was very entertained by his story. Jeff Chapman has written a very enjoyable fantasy novel about a cat named Merliss. Merliss is not an ordinary cat as she is actually the spirit of a young girl trapped within the body of a cat, who has lived for a very long time. This story has great characters, plenty of magic, sly magical creatures, twists and turns, and humorous situations. I recommend this book and I'm looking forward to the next book in the series. Jannie Meisberger's narration is great and adds to the enjoyment of the tale. I was given a free copy of the audiobook and I have voluntarily left this review.

An enchanted cat in the middle ages

This is a rather spectacular retelling of a major time in history from a very different perspective. The black plague was a terrible time in Europe and the medical science led to some very incorrect choices. This emphasizes that in a rather masterful telling from the eyes of an enchanted cat.

Excellent book and part of The Merliss tale

The Great Contagion is part of the Merliss tales.
Excellent Book!
Never judge a book simply by a title. This book is fantastic!
The story isn’t centered around sickness. It’s about a young magician stuck for centuries in a cats body.
When you have cats you have mischief!
I ran across this book while I was listening to Cat Sidhe which Sidhe is pronounced “She.”
They are both fantastic books but please listen to this one first to get a good feel of the Characters personalities.
I hear there are more books in the works! I can’t wait!

What a great story

I really enjoyed this story. The perilous travels of Meriless the cat. She encountered monsters, killers, friends & danger. All the while just wanting to help. Helping is hard when your a cat. But not when you are a magic cat. I reccomendl this book if you like magical adventures & cats of course.

A magical cat amid games of the old gods

Merliss is an ancient shaman cast into the body of a cat centuries ago. She made an oath as a shaman to protect her people, and she carries that oath forward as a magical cat. To do it, she allies with other magical creatures of the forest, plains, and streams to trade intelligence and favors; she assists the local cunning men--those with gifts of healing--to find the roots, herbs, and fungi they need to minister to their people; and she uses blood magic to draw power from the ley lines below the earth. And that's just the background canvas!
I was captivated by the language and imagery. She tells her story like a magical cat who is also an ancient shaman--with precise vocabulary that brings to life the damp forest loam under her paws, the smells of flowers and leaf mold and the mud of the riverbank, and the sour taste of river goblin blood caught in the rough of her tongue. The narration was wonderful.
The story itself had several strands that did not hang together perfectly, but whose life is perfect? And when you are trying to understand the games the old gods are playing, can even a centuries old magical cat perceive which is a piece and which is not?
I received this audiobook free in exchange for an honest review.

Merliss, our heroine, is a centuries old cat with the heart of a shaman girl trapped inside. Her unique talents aid the ‘cunning man’ and his apprentice as they try finding a cure for the plague that’s killing people. Mr Chapman has built a unique world blending magic, suspense, Fae legends, herbal medicine, heartwarming characters, unusual creatures, an evil sheriff and a twist ending into a totally captivating tale. I look forward to reading more of Merliss’s adventures. I received an audio book as a gift and am happy to recommend this book. Enjoy!

the story kept my attention at every turn and bears another hearing. and the narration - I have never enjoyed another narrator as much. not sure if I fell in love with the characters or tha narrator! either way, this is a wonderful audiobook and I give my highest recommendation!

Middle-grade from a cat's perspective

If you are a cat lover, you will love The Great Contagion no matter your age. The author, Jeff Chapman, does a magnificent job describing things from a cat’s perspective. His writing truly shines when he is describing her motivations and cat-like behavior. If he wasn’t a cat in another life, he must be a great lover of cats. I imagine him a man who daydreams what his cats are thinking about as they lounge by a warm fire and purr at his scratches.

If I review this book as a middle-grade book, I think it is fantastic. It pushes the boundaries and brings in some interesting themes. If you like the Magic Tree House series, you will love this book. 5 stars

I struggled with the review for this book more than I have any other book. This book is touted to be a YA fantasy. But alas, it is not. I will admit that it rides the line between middle grade and YA, but it tips more to the middle-grade side of the fence. You could easily replace the two main characters in any Magic Tree House book with this cat, and she would fit right in. I really think that says it all right there.

What is missing from the book? What would make it more YA? Relationships for one. While the cat is a fascinating character, she doesn’t spend very much time in one place. Therefore, you don’t see her building or deepening relationships. The strongest relationship that she has is with the house that she lives in.

If I review this book as a YA fantasy, it is missing the elements that make me love YA. While the cat is fascinating, she is constantly driven by the action around her. Her best moments come at the end of the book when she finally takes charge to save her fellow cats. 3 stars

Jannie Meisberger narrates this book to perfection! She adds so much to the book. I cannot imagine anyone else narrating this book.

Source: I received a free copy of this book in exchange for an honest review.

I enjoyed this book!Merliss is a cat,for the most part.She has magic in her and will be tasked with saving cat kind. Jannie Meisberger was a fine narrator.I was given this free review copy audiobook at my request and have voluntarily left this review.'

I am a huge cat fan and love most stories featuring cats as protagonist. Jeff Chapmen builds fantastic worlds with his great story telling. Written very well characters are so likeable. Narrator did a great job as well. The right voice telling the story can make all the difference. Would definitely recommend for cat lovers.

what a totally lovely audiobook with the main character a cat. It was well written by Jeff Chapman and narrated by jannie Meisberger.

I really enjoyed it xxxxxx