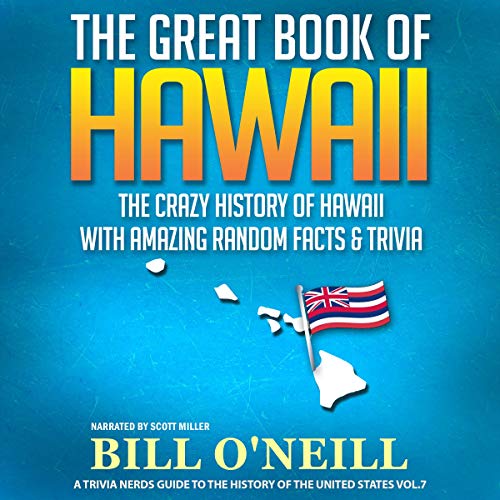 The Great Book of Hawaii: The Crazy History of Hawaii with Amazing Random Facts & Trivia

How much do you know about the Aloha State? There’s so much to learn about Hawaii that even residents of the state don’t know! In this trivia audiobook, you’ll learn more about Hawaii’s history, pop culture, folklore, sports, and so much more!

In The Great Book of Hawaii, you’ll find the answers to the following questions:

And so much more!

As an added bonus, you’ll learn words from the Hawaiian language throughout the audiobook.

This audiobook is packed with trivia facts about Hawaii. Some of the facts in this audiobook are surprising, while others are sad or creepy. The one thing they have in common is that all of them are interesting!

Whether you’re just learning about Hawaii or you already think you’re an expert on the state, you’ll learn something you didn’t know in every section. Your history teacher will be interesting at all of your newfound knowledge.

So, what are you waiting for? Get started to learn more about Hawaii!

What listeners say about The Great Book of Hawaii: The Crazy History of Hawaii with Amazing Random Facts & Trivia

Although this book has some minor trivial information included, I wish I had never purchased it nor spent the time to listen to it. Alas, I had a two hour a day commute with time to kill, so I gambled, and lost.
The inflection delivered by the orator resembles that of a haberdasher in an early American circus act. The gross repeated mispronunciations of many Hawaiian names and places is without parallel. This only illustrates that the authors have likely never been to any of the Hawaiian islands, and that their research into the contents of this book were amateurish at best. Perhaps the best unintended consequence of my time waisted on this book is the realization that almost anyone could have written a better book on Hawaii, especially those of us that live here.

Probably better if you're reading it but when you're listening to the narration it's incredibly repetitive. no storyline just a bunch of random facts strung together. Joe said to learn something about Hawaii before I travel there and this simply wasn't what I was looking for. would not recommend

Get Ready to Visit Hawaii or Find Inspiration!

I have listened to a number of Mr. O'Neill's "Great Book" series. This one is in the same mold of the others - fun, easy and interesting. Listen and learn - fun facts, history, weird stuff and truly amazing attractions! Well done again Bill!

A lot of misinformation

A great deal of misinformation regarding the statehood of hawaii Hawai’i is not a state of the u.s. it was stolen and illegally annexed. The international courts have made that determination. Along with a great deal of other falsehoods The book was more of a sales pitch. Zuckerbueg stole the land he is on.

Good book for a third grader

I expected this book to be geared towards adults readers/listeners. I felt the the material covered was quite elementary level. I felt the narrator sounded like a children’s book narrator. If you a fairly intelligent adult, I’m not sure this is the book for you. But it could be very interesting for 8-12 year olds.

The Narrator wasn’t all that great.

If someone is going to narrate a book they need to at least know how to properly pronounce the words. Or at least get someone who grew up on the islands who can better narrate it.

As a native Hawaiian I’m beyond offended that this is what we’re trying to teach others about Hawaiian culture and history. Not only are words just entirely butchered into something not even close to resembling how we Actually say it in Hawaii. It seems that the author needed a filler in creating a chapter about famous actors and sports athletes?! This has ZERO to any relevance to Hawaiian history. It’s an extreme disappointment to say the very least. You’d expect more out of the publishing company, in fact checking pronunciations.Terrible job all around. Stopped listening less then an hour in.

Not quite what I expected!

This seems to be more suited to 6th or 7th graders. I was looking for an informative book about Hawaii for an upcoming luau, but this didn't provide much for my purpose

Hawaii to the world

This is a great way to learn about the beautiful islands of Hawaii. It is more than just a place for honeymoons and vacations, but also full of cultural heritage with a deep history. The trivias are fun and narrated in a way that keeps the exciting energy of a trivia. Nice book.

I received a free copy of this book in return for an unbiased review.

Hawaii is even more fascinating.

Listening to this book is fun. The most fascinating aspect is the way in which each fact is presented. The narrator did a good job by making the entire listen conversational, yet informative. Hawaii is a beautiful place, but according to the facts from this book, it is much more than the paradise state of the United States.

This book was given to me for free. I have left this review in return and of my own volition.

This book is just fun!

There is always something interesting to learn about Hawaii. The beautiful island holds many treasures in history, beautiful landscapes, and cultural heritage. Listening to this book has introduced me to a bit, and perhaps I'll learn the rest when I eventually visits Hawaii. Anyway, good and interesting book.

I received a free copy of this book from the author, and I have left this review in return.

A whole new side to Hawaii!

This book is just lovely. It pictures Hawaii in a more interesting and fun way. I mean, Hawaii is famous as a vacation destination: images of colourful dresses, camp fires and other fun activities usually come to mind. It gets more interesting to know how it got it's "Aloha" nickname (which is a greeting in the native language), among many other things. I have always found Bill'O Neil's books to be delightful, and this is no exception.


I received a free copy of this book at my own request, and have wilfully written this review.