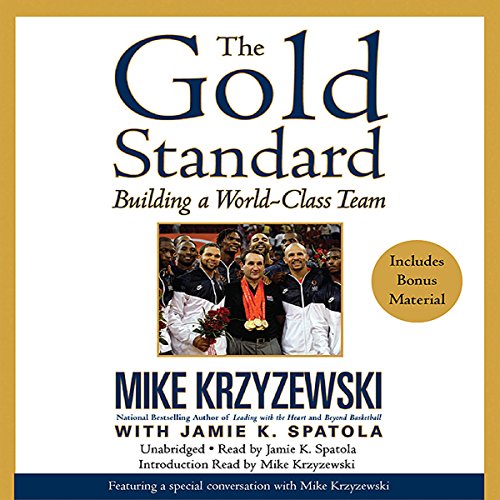 By: Mike Krzyzewski
Narrated by: Jamie K. Spatola
Try for $0.00

Half an audiobook on basketball, half an audiobook on management techniques, The Gold Standard captures Coach K's personal style and approach to getting different (and sometimes difficult) people to work hard and succeed in reaching a common goal.

"In all forms of leadership, whether you are a coach, a CEO, or a parent, there are four words that, when said, can bring out the best in your team, your employees, and your family...I believe in you. These four words can mean the difference between a fear of failure and the courage to try".

In his previous best-selling books, Coach K has guided listeners to success the way he has guided his teams at Duke University - with the power of his inspirational words and phenomenal leadership skills.

But that was with college kids. Now, Coach K has stepped up to take on an entirely new challenge: Volunteering to coach the US Olympic Basketball team.

Comprised of some of the biggest NBA stars, Coach K had to work with huge egos and personal rivalries in order to create an American team that could win against the best competition in the world and restore Team USA to the gold standard of basketball.

This is more than a celebratory audiobook - it's Coach K's first-hand account of how he dealt with such stars as Lebron James, Kobe Bryant, Carmelo Anthony, and all the rest to buy into his "total team" play.

What listeners say about The Gold Standard

Coach K wrote another great book about leadership. Between Coach K's "moments" from the three year run to Olympic gold in Beijing, and his daughter's vibrant narration, this is fast moving and high energy book. Even though we all knew the outcome, his play-by-play of the final game even had me sweating.

Great coaching points. Wanted a bit more detail regarding player self/peer accountability to the standards and evolution communication amongst players.

Not a sports book about the Olympics and players. More of a motivational speech of team building and corporate sponsors.

Not really a sports book about the inside view of the coach and players and their struggle for Olympic gold. More of a book about team building and pay back to corporate sponsors and others for their support. I love Coach K as a Coach. Motivational speaker for corporations- not so much.

Great coach but fluff story. Never had an argument. Never had a doubt. I think the desire to be inoffensive made this story lightweight.

I respect the team building and the awesome results. Wish there was a little more meat on the bone.

Good summary of what it took to win the gold from scratch. The story told with real moments.

A story, not a guide

A definite meh. lots of basketball talk and bragging about winning the Olympics, with a few bits of business talk sprinkled on it in order to try to market it as a leadership book and sell more copies.

interesting story, reads more like a memoir than how to book. wanted it as a leadership tool, some concepts adaptable but much of it more happenstance.

The context of moments

I just finished Coach K's The Gold Standard, and I feel sorta high! It is such a great story, chalked full of practical leadership applications. I especially love how he weaves basic good-human qualities into his life/coaching style.

You just get a lot of hands on experiences with some of the best athletes, competitors and coach K.
This model, system, life style or whatever you will call it is beneficial for all aspects of life.
It's a great team book and the understanding of giving roles is a defining staple in all the great leaders.

Memoir more than anything

Book just seems like he wanted to relive his successes and friendships. Didn't learn anything.