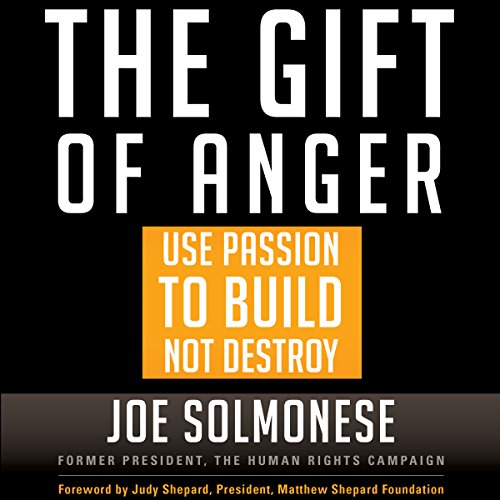 The Gift of Anger

How to Use Passion to Build, Not Destroy
By: Joe Solmonese
Narrated by: Tom Dheere
Length: 4 hrs and 54 mins
Categories: Business, Leadership
3.5 out of 5 stars 3.6 (8 ratings)

The Gift of Anger

Under Joe Solmonese's leadership, the Human Rights Campaign, the nation's largest LGBT rights organization, became the model other organizations look toward to create effective social and political change. Ranked among the National Journal's top five most effective groups, HRC was instrumental in passing landmark national legislation such as the Matthew Shepard and James Byrd, Jr. Hate Crimes Prevention Act, the repeal of Don't Ask, Don't Tell, and the passage of marriage equality in eight states.

Beginning with a moving story of working with Matthew Shepard's mother Virginia in passing the hate crimes bill that bears Matthew's name, Solmonese shows how he discovered that channeled anger can drive a commitment to change. Mrs. Shepard taught him to keep his unquestionably justifiable anger from blinding him in the moment, and instead use it strategically, in the service of a larger purpose. In this book he uses the lessons he learned during his tenure at HRC, as well as his previous position as the CEO of Emily's List, and his current work as a corporate consultant, to teach listeners how they can affect real, lasting change in society and at work. His often-surprising lessons may not be entirely expected or celebrated by all groups, e.g., don't shame your enemies, find allies wherever you can, and ask for the doable, not the impossible. Most striking in this book are the stories of Joe's ability to draw some kind of win - however small - from seeming enemies. Many of these former enemies became stalwart allies over time. Joe's book is more concerned with the "long game" of changing culture and achieving long-term goals, not the "short game" of enforcing purity or litmus tests.

If you could sum up The Gift of Anger in three words, what would they be?

If you’ve listened to books by Joe Solmonese before, how does this one compare?

I haven't listened to any others. But I probably would just to compare the tone from this to his other work.

I felt like he did an average job. I wanted more emotion and varying pacing. It seemed to move exactly at 5mph regardless of the content. However, he did a fine job.

"How we manipulated public perception and won!" This would make an incredibly interesting documentary. However, if this was turned into a documentary I would assume a more balanced perspective would be given.

This book was wonderful. It may not seem like that from the answers above. I was turned off by the self-righteous tone of the author. I agree with many of his beliefs and disagree with a few. But even as he spoke about changing the tone of the HRC and the GLBT's approach to winning over public perception and using anger instead of just vocalizing it... he still spoke really condescendingly about any person or religion or organization that challenged his personal beliefs. Almost like beating them was just a means to an end and they didn't really matter in the scheme of things. This was very bothersome to me. A minority should be able to have compassion for other minorities/groups challenges and perceptions.It really detracted from the overall message that I think was amazing! The overall concept is EXACTLY what Black Lives Matter should implement to shift public opinion ASAP.He used the phrase "I knew we were on the right side of history" probably over a dozen times as a way to basically say everyone else is wrong to believe differently than he did, or feel differently. For someone who wants other people to respect his views and feelings, he didn't offer genuine respect back. At least not in the writing.I think that with a few edits to remove the negative underlying message this could be one of the most important books on compromise, learning to respect others, seeking common ground and finding mutual solutions to HUGE social problems we would have for this generation. And that is high praise from me indeed.I was able to read past the understandable contempt and truly appreciated the wisdom of working with others in challenging situations. Fantastic ideas here. WAY too much political-view superiority and preaching. And I am not a right-wing conservative.

Insightful and Informative at times

Where does The Gift of Anger rank among all the audiobooks you’ve listened to so far?

Had some interesting concepts, which I didn't necessarily agree with, but with an open mind I think the presentation of this book was good. It was biased at times, and didn't deliver the message the title intended to accomplish.

TARGET AUDIENCE: This book chronicled the recent legal, political, and social activities seeking equal rights for individuals from the LGBQ community. Although these individuals face bigotry and feel anger, I expected the book to be about how to use anger as a catalyst or motivator to seek personal change and growth. It was nothing like this. If you are conservative, you probably won’t like this book. If you’re a moderate, maybe…. There was much I enjoyed, but the author was certainly not unbiased. If you are liberal you will love it. The author’s anger towards and comments towards Mormons and their garments was objectionable. Mocking Religious clothing whether Mormon Garments, the Jewish Kippah, Tzitzit or Tichel or an Islamic Burqa is always disrespectful. He lost all credibility with me when he did this.

NARRATOR: Narration was great. Well-read and easy to listen to.

OVERALL: It is generally the publisher’s responsibility to choose the title for a book. They really missed it this time. Not at all what I was looking for. Very misleading. As previously mentioned, I thought it was about Anger. The description of the book said that the “key to success was learning to harness his anger… Essentially it’s just a form of energy.” He utterly failed to show how he did this or how anyone for that matter could do this. Throughout the book I found some great info, mixed with personal biases, and little to do with turning anger into growth. There was some great information about how to deal with other people’s anger, and how to find middle ground. (He could have used some of his own advice when talking about Mormons.)

If the book was re-edited, re-named and re-published I could give this a 4 or 5 stars, but as it is, I can’t give it more than 1 star.