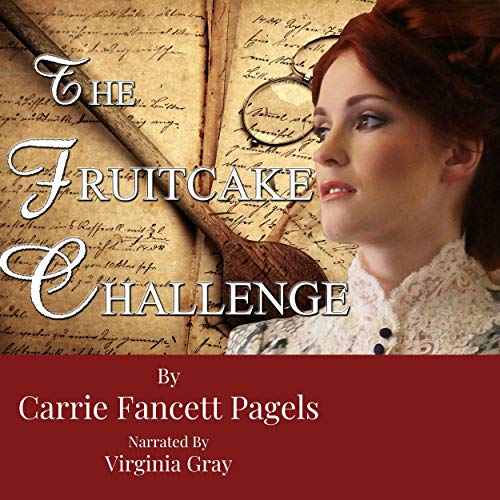 When new lumberjack Tom Jeffries tells the camp cook, Jo Christy, that he’ll marry her if she can make a fruitcake “as good as the one my mother makes”, she rises to the occasion. After all, he’s the handsomest, smartest, and strongest axman her camp-boss father has ever had in his camp - and the cockiest. And she intends to bring this lumberjack down a notch or three by refusing his proposal. The fruitcake wars are on! All the shanty boys and Jo’s cooking helpers chip in with their recipes, but Jo finds she’ll have to enlist more help - and begins corresponding with Tom’s mother.

Step back in time to 1890, in beautiful Northern Michigan, near the sapphire straits of Mackinac, when the white pines were “white gold” and lumber camps were a way of life. Jo is ready to find another life outside of the camps and plans that don’t include any shanty boys. But will a lumberjack keep her in the very place she’s sworn to leave?

What listeners say about The Fruitcake Challenge

Full of humor and charm, I'm sure anyone who enjoys historical romance will love this cozy romance!

Just in Time for the Christmas Season

I enjoy reading historical fiction and stumbled upon the Lumberjack Ball by Carrie Fancett Pagels several years ago. I have enjoyed several of her other books, mainly set in the late 1800's in Michigan. When the opportunity from the author to read The Fruitcake Challenge in audiobook format I jumped at the chance. Audiobooks are not a replacement for the written word for me, but an addition to print copies.

The Fruitcake Challenge is the first book in the Christy Lumberjack Series. Imagine being a woman living in a camp full of lonely lumberjacks. Women are scarce and you are likely to be proposed to on a regular basis. Lucky for Jo, our heroine, she has two burly, protective brothers. No man would dare to bother Jo, until Tom Jeffries. Confident, good looking and full of himself, his first impression on Jo was anything but impressive. Until he issues his fruitcake challenge, that is. Still grieving at the recent loss of her mother, she is weary of the camp, the men and would love nothing better than her independence. I enjoyed the banter between Jo and Tom in the kitchen with the other cooks. I felt like I could have sat down on a bench and had a cup of coffee and fruitcake with everyone.

This audiobook is narrated by Virginia Gray. She did a nice job on both women and men characters, not an easy task. I hope to listen to more books narrated by her in the future.

Novellas are quick but shouldn't be overlooked. This one is entertaining, and with the fruitcake theme, it reminded me of my own mother making her grandmother's fruitcake every year for Christmas.

I enjoyed this historical romance on audio. Loved the narrator and the story. Sometimes serious and sometimes a little funny but always good story. I have read many books by this author and she never disappoints.
Jo doesn’t know exactly how she feels about this new lumberjack Tom because he seems so educated and using all these big words. But when he says he will marry whomever can bake a fruitcake like his mother she has a plan. I enjoyed the characters and how the author brought them to life.
Don’t miss this quick Christmas read that I think you will enjoy if you like a historical romance.
I received a free audiobook but was not required to write a positive review. All opinions are my own.

Quick Listen Will Put You in the Holiday Spirit

A well-narrated audiobook can sweep me away from whatever task I’m doing as I’m listening, and The Fruitcake Challenge by Carrie Fancett Pagels (narrated by Virginia Gray) was one such book.

The unique setting of a Michigan lumber camp and the many characters who resided there—from Jo to her brothers to the other cooks and lumberjacks—kept the plot moving and entertaining. Jo and Tom may clash at first, but quickly grow to respect each other.

Virginia Gray’s narration of both the male and female points of view is excellent, not detracting at all from the story.
With baking, good will, and a spirit of giving, The Fruitcake Challenge is a quick afternoon listen (maybe while you’re doing some Christmas baking yourself).

Disclosure statement: I voluntarily reviewed a complimentary copy of this audiobook and was not required to write a positive review. All opinions are my own.

*audiobook review
A narrator can easily make or break a read, and in this case the narrator did a wonderful job making this a super enjoyable listen. She did a great job with both the male and female voices. Her lively energy kept me invested and wanting to see how everything would unfold

The story had interesting characters and and endearing, fun plot. I could picture it being a Christmas movie. It was a light read with plenty of humor. Unfortunately my favorite part would involve a spoil so I won't share it here, but it certainly brought a smile to my face. If you know me, I don't typically read Christmas stories but I actually enjoyed this one. I think others would enjoy it as well.

I received an audiobook copy of this book through JustRead Tours. Thoughts and opinions expressed are mine alone.

I really enjoyed the audiobook version of this novella! I thought that the narrator did a great job bringing these characters to life. I really liked Tom and his challenge. I loved how it brought so many people together. I enjoyed getting to know these characters during this short story. I hope that we will see them again in another story one day. I liked the details that helped bring the story to life too. I liked reading a story set in a lumber camp. It’s a setting that I haven’t read a lot about. I also liked the author’s note at the end.

I was given a free review copy of the audiobook and have voluntarily left this review. The thoughts and opinions expressed are mine alone.

A beautiful Christmas story with fruitcake pushed into the mix and romance.
A quick narrative, I enjoyed this quick tale that pulls you into the spirit of the holidays. Set in a lumber camp in the middle of Michigan, it revolves around the cooks and the lumberjacks.
I loved Jo's spunk and her desire to rise up to the challenge even when she wasn't sure what her heart wanted.
It was a wonderful heartwarming tale.
I received a complimentary copy of this audiobook from the author via JustRead tours. All opinions expressed are solely mine

The Fruitcake Challenge is so enjoyable—even though the mention of fruitcake normally makes me cringe. haha I enjoyed the light feel and the fun banter between Jo and Tom. The humor is fun and unites the story in a neat way.

Jo has a complex personality with a strong spirit. Tom has a bit of swag and is oh-so-easy to love. Their romance is highly amusing and entertaining, offering a satisfying conclusion.

This story shares a sweet romance with easy-to-root-for characters and an inspiring spiritual core.

Audio Narration: Virginia Gray has a pleasant voice, fluctuating nicely with the different characters. Her voice is soft and feminine, yet her male character interpretations are not distracting. She breathes life into the variety of characters.

Audio Production Quality: The production quality of this audio book is clear with no distracting noises or music.

Overall Opinion: The Fruitcake Challenge is a fun, clean story. I enjoyed the lumber camp setting, the characters, adventure, challenge, and humor. I recommend this light-hearted fun Christmas story.

Such a Fun Listen!

Let me preface this review by saying that I am a straight up newbie when it comes to audiobooks. I've listened to a few but I struggled to stay focused (thanks ADD!) and gave up, but I am back and giving a different genre a shot in hopes of finally being able to finish an audiobook.

The Fruitcake Challenge is my first "read" by Carrie Fancett Pagels, and I have to say I thoroughly enjoyed this book. The heroine, Jo Christy, is addressed numerous times throughout the book as Ms. Christy. My name being Christi as well gave it a cool little twist for me, really helping me to put myself in Jo's position, and to become immersed in this world.

Poor Jo is in a world full of lonely lumberjacks and not very many women. Proposals and perusals are plentiful but are warded off by Jo's two older, and very protective, brothers. That is, until Tom Jeffries, the new, confident and incredibly handsome lumberjack, comes into town, catching Jo's eye, and leaving her unsure about how she feels about him. Tom is unimpressed with Jo at first glance, but decides to offer a challenge to the camp cook: if she can make a fruitcake "as good as the one my mother makes" then Tom will marry her. Jo, intent on bringing this cocky lumberjack down a peg, rises to the challenge, and it is this challenge that changes everything.

I adored the banter between Tom and Jo, loving the funny parts, but also appreciating the serious parts as well. At first, the narrator's voice was a little stiff for me, but once I got a few chapters in I really started to enjoy listening to narrator Virginia Gray, her male and female voices wonderfully done, helping to paint a wonderful picture of The Fruitcake Challenge and Tom and Jo's story.

I will say, audiobooks are redeemed for me, thanks to The Fruitcake Challenge. Will they replace actual books for me? No, but I still enjoyed the experience nonetheless, this novella so witty and sweet, the lightheartedness exactly what I needed during this season.

*I have voluntarily reviewed a copy of this audiobook which I received from the author/publisher through JustRead Tours. All views and opinions are completely honest, and my own.

I read this story years ago and was so happy to have the chance to listen to it now as an audio book! The narrator had a very pleasant voice and did a great job with this novella. She changed her tone of voice for various characters, yet it was not overdone. This was a fun story to listen to.

Jo certainly had the tendency to jump to conclusions in this story. She caused herself so much worry and angst due to the things she assumed. Tom and Jo teased back and forth and there was some great banter between the two. A few open conversations between these characters would have meant that they could have realized how much they cared for each other earlier, yet there would have been much less of the spirited teasing that made the novella a lighthearted and fun choice for a Christmas story to enjoy.

I received a complimentary copy of this audio book. All opinions are my own.