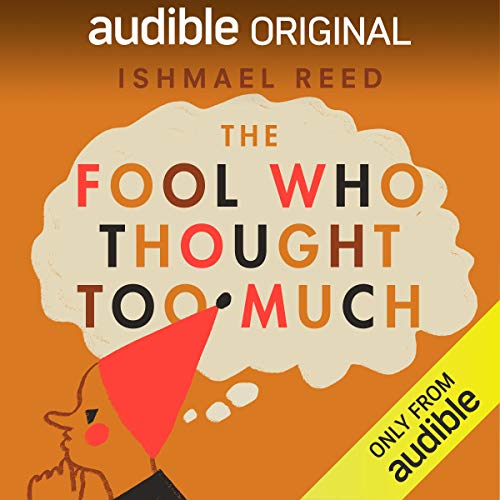 The Fool Who Thought Too Much

By: Ishmael Reed
Narrated by: Adam Lazarre-White
Try for $0.00

It’s tough to be a buffoon when the Age of Reason is trying to downsize your job. When the King’s Fool dies unexpectedly, a professional buffoon tries to move up the ranks and grab the top slot. But the politics involved in becoming a court jester are no laughing matter. The rules of becoming the top fool are simple: The winner is the one who performs the most outrageous act. Our buffoon and his fellows struggle for supremacy in a profession that is heading for extinction.

Ishmael Reed is a playwright, poet, and author of such groundbreaking novels as Mumbo Jumbo and Reckless Eyeballing as well as the best-selling Audible Original Malcolm and Me. Now the acclaimed writer returns to the form that introduced him to reading when he was a child: fairy tales.

Ishmael Reed is the author of more than 30 books, including his essay collection, Why No Confederate Statues in Mexico (Baraka Books, 2019); his 11th novel, Conjugating Hindi (Dalkey Archive Press, 2018); and his 11th nonfiction work, The Complete Muhammad Ali (Baraka Books, 2015). In 2019, New York’s Nuyorican Poets Café premiered his ninth play, The Haunting of Lin-Manuel Miranda, which garnered three AUDELCO Awards. His poetry collection, Why the Black Hole Sings the Blues: Poems 2007-2019 (Dalkey, 2020), features "Just Rollin' Along," a poem about the 1934 encounter between Bonnie and Clyde and Oakland Blues artist L.C. "Good Rockin'" Robinson, which was chosen for The Best American Poetry 2019. In addition, Reed has edited numerous magazines and 14 anthologies, including Black Hollywood Unchained (Third World Press, 2015). He is also a publisher, songwriter, cartoonist, public media commentator, lecturer, teacher, and founder of the Before Columbus Foundation and PEN Oakland, nonprofit organizations run by writers for writers.
After teaching at the University of California, Berkeley for more than 30 years, he retired in 2005. Now a Distinguished Professor at California College of the Arts, he also taught a spring 2019 creative writing class at UC Berkeley. He is a MacArthur Fellow and the recipient of many other honors, including a National Book Award, the 2018 Charles H. Wright Museum of African American History Award, the 2017 AUDELCO Pioneer Award for the Theater, the University of Buffalo’s 2014 Distinguished Alumni Award, a Lila Wallace-Reader’s Digest Award, San Francisco LitQuake’s 2011 Barbary Coast Award, and Pulitzer Prize nominations. Reed was also named 2008 Blues Songwriter of the Year by the West Coast Blues Hall of Fame, and his collaborations with jazz musicians spanning 40 years were recognized by SFJazz Center with his appointment, from 2012 to 2016, as San Francisco’s first Jazz Poet Laureate. Additionally, in 2016 he became the first recipient of the Alberto Dubito International Award in Venice, Italy, recognized as "a special artistic individual who has distinguished himself through the most innovative creativity in the musical and linguistic languages."
Photographed by Jason Henry

Adam grew up in New York City, went to public school, The Fieldston School and then Harvard University, graduating with Honors in Government & Political Philosophy. He started at Quarterback for The Harvard Crimson and played guitar and saxophone in The Harvard Jazz Band.
Coming soon as Captain Cam Wilson romancing Wanda Sykes, and across from Mike Epps on the new Netflix show, The Upshaws—Adam's recent work includes the hit film, The Gift, The Blacklist, Lethal Weapon, Glow and Scandal. Adam is known for his 25 year acting career, which began on Living Single, Martin, Hangin’ w/ Mr. Cooper, continued on Will & Grace, The Parkers, as the notorious Flynn in the Emmy-winning NBC mini-series, The Temptations, and being nominated for an NAACP Image Award for his lead role as Nathan Hastings on The Young & The Restless. Notable roles include Ocean’s 13 with Al Pacino, Grey’s Anatomy, Rosewood, Criminal Minds, Royal Pains, Private Practice and starring as Ian on Heroes.
Now, the newest member of the NCIS New Orleans writing team for Season 7—which began airing on Sunday, November 8th, 2020, Adam was a senior writer on Vin Diesel’s groundbreaking web-series, The Ropes (available on Netflix). As a director, Adam reached the third round of Oscar voting with his short film 200 Years produced by Rob Fried ( Collateral, Rudy, Boondock Saints). Adam co-wrote, produced and starred in, Forgiveness with Richard T. Jones, which won The Martha’s Vineyard Film Festival, International Black Film Festival; swept The San Diego Black Film Festival; was featured at The Pan-African Film Festival and more. Adam adapted and produced TV movies for Proctor & Gamble: Just Passin’ Through and What Angles Fear—both won Emmys for Regional TV and Adam won Regional Emmys as Leading Actor in both. His theatre credits include Mercutio in Michael Arabian’s Romeo & Juliet, Trojan Women; Bobby Seale (Black Panther leader) in Ron Sossi’s Chicago Conspiracy Trial, Neil LaBute’s This Is How It Goes, LATC’s You Morons Shoulda Stayed Home; and John Bishop’s Confluence and Legacies, at Circle Rep West where he was an executive member. Adam is the Founder of ALW Acting Studios, teaching beginners, intermediate, and advanced actors. He is a highly regarded acting coach who coached all the NBA stars in the popular film, Uncle Drew. His students include many well-known working actors. Adam taught at AMDA Conservatory in Los Angeles; at Gray Studios, and was a guest professor for the both drama and film departments at the U. of Alabama, when his film, 200 Years, and presentation, Media, Race & The Power of The Pen were featured at the Civil Rights and Arts Conference at UAB, alongside Harry Belafonte, celebrating the 50th Anniversary of Martin Luther King’s Letter from a Birmingham Jail.
ORIGINALS

We’re raising the bar on audio entertainment with these original listens produced in the Audible studios.
+More
LIST

Explore collections of essential Black voices and authors who were integral to making this nation what it is today.
+More
LIST

These 15 brilliant books are from today’s most acclaimed and top-selling African American authors.
+More

What listeners say about The Fool Who Thought Too Much

I wasn't expecting much, but I received a ton! This story was so good and related to the world that we live in now. Everyone is in a race to be the fool. But what happens when the fool wins the race. I wish I could buy this book for everyone, and for those who check it out, I hope you enjoy it as much as I did.

the book has its moments, with a history of jesters and an indictment of some hypocrisy in the enlightenment, but generally slow, with an unsatisfying ending

Recommended for someone wanting an off-beat, quirky snapshot of the enlightment from the eyes of a jester.
Narration was a tad slow for my liking, no deal breaker. Aside from that the narrators performance was good.

A child would take this book is just a silly fun story. But anyone with any awareness of the current political climate here in the US will find this insightful, charming, and funny.

A fantasy; whose...? I say the past, present, and future of breathing while dead. I loved this book; and couldn’t stop laughing. Then I did stop. Then I laughed again. I pray (religion?) this book was a comedy. Perhaps, I am...

The story seems interestiing... but it was so hard to tell with the reader. His performance was so measured and plodding in pace that any nuance or humor was lost.

I began this and liked the velvety sound of the narrators voice but it lost me. I get what it's going for, but I just don't want to listen to this any longer. There's enough of this in every day life.

This story was short, and sweet, but very entertaining. Definitely an interesting development. The narrator was pretty great too.

Great way to start the day

I listened straight through. Very entertaining and stimulating for wordsmiths like me. Also liked the historical parallels.

be prepared for 1 hour whatever of politically correct brainwashing. you could certainly tell that this long short story was written in 2020

Predictable but easy to listen to

Although the story was predictable it was interesting and easy to listen to, and enjoy.

It might be a good story. I couldn’t get through the first 5 minutes.
The narrator was horrid. It sounded like he was reading the book to a group of kids.

I wasn’t expecting anything at all. I liked the title and the book was free, so thought “why not”. It was going to be a quick listen whilst I got ready for my day.

Some of the language surprised me. It was interesting hearing about court jesters and the 1700s alongside phrases such as “with your bad self”! It rather amused me actually.

A lot of great imagery and I could relate so much of it to today’s world. I’ve never read/listened to anything like this before. It was interesting, but I’m afraid the author and the reader lost me at the end of Part 1. I’m not too sure why, but I just couldn’t want to finish listening. As though I don’t care to know what happens next. A pity.

Adam Lazzare-White did a great job reading this book. I just lost interest. Perhaps I’ll come back to it another time.