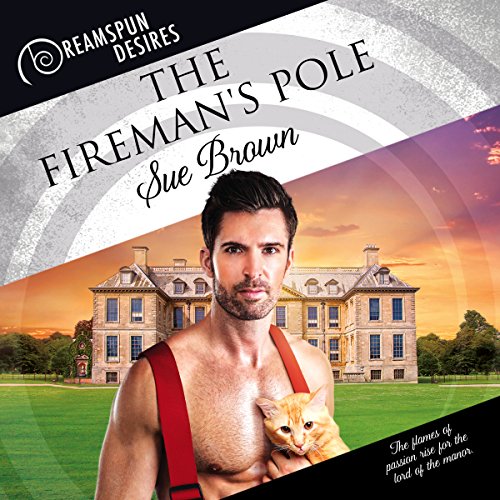 By: Sue Brown
Narrated by: Finn Sterling
Try for $0.00

The flames of passion rise for the lord of the manor.

It’s springtime in Calminster village, but things are already heating up. Sexy firefighter Dale Maloney is new to the local station. When Dale backs the company fire engine into the village maypole, he attracts the ire - and attention - of Benedict Raleigh, the Baron Calminster.

Soon after meeting Dale, Ben breaks off his relationship with his girlfriend, and the sparks between Ben and Dale are quickly fanned into flames.

Unfortunately, the passion between the two men isn’t the only blaze in the village. An arsonist’s crimes are escalating, and it’s up to Dale and his crew to stop them. Meanwhile, as they investigate, an unscrupulous business partner attempts to coerce Ben into marrying his daughter. The May Day parade is around the corner, but they have plenty of fires to put out before Ben can finally slide down the fireman’s pole.

What listeners say about The Fireman's Pole

The Fireman’s Pole is a sweet romance featuring opposites attract in keeping with the Dreamspun Desires brand promise of contemporary romance with heartwarming heroes.

The story is told from both firefighter, Dale Maloney, and Baron Calminster, Benedict Raleigh’s, POV. Dale is new to Calminster village and doesn’t make the best first, or second, impression on the Lord of the Manor.

However, Ben is still taken with Dale and the two eventually warm up to one another. While their relationship develops, Ben finds himself fending off a bitter business partner intent on taking over Calminster Hall and village, and both Dale and Ben deal with some mystery involving several fires suddenly cropping up all over the village.

Personally, I thought it ended too abruptly and I’m disappointed I didn’t get the relationship HEA I was waiting for, and I was unsatisfied with the resolution for a couple of plot lines.

As for the narration, Finn Sterling uses distinctive character voices, he has good pacing and timing, and I love the emotion in his voice with his performance.

There are three things that keep me from giving this an enthusiastic thumbs up. First, Finn Sterling’s English accents need work. Second, was the way Dale’s accent and voice pitch kept changing throughout the performance. Third, I really wish Sterling wouldn’t use a high falsetto for every woman’s voice. There are multiple types of female voices with their own respective note ranges and I hope Sterling starts to use a range when voicing his future female characters.