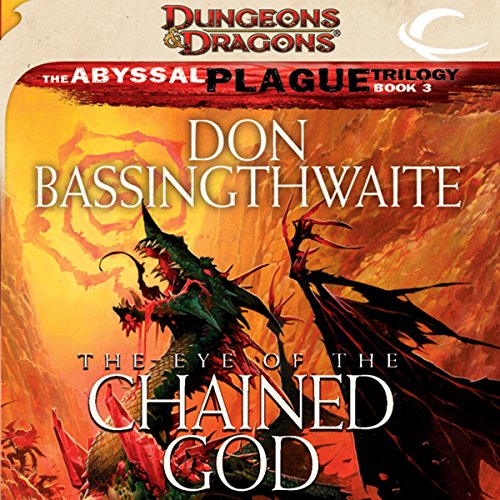 The Eye of the Chained God

In the aftermath of the plague demons' attack on Fallcrest, Roghar's inspiring optimism has played a significant role in the rebuilding of the town. Albanon, meanwhile, has not recovered so well. Tormented by his experiences and his near-transformations - first by Vestapalk then by Kri - he has retreated to Moorin's tower, where he immerses himself in books. He is the last member of the Order of Vigilance, touched by both the Voidharrow and Tharizdun - he feels as if he stands on the brink of madness.

The Nentir Vale has been ravaged by the abyssal plague and the plague demons. The area is lawless and suspicions run rampant. Only safe as long as they hide, the heroes scout as close as they dare. But with Vestapalk growing ever-stronger and plague demons on the rise, they know they have to act soon. The world cannot afford to wait any longer. As they journey toward the greatest concentration of demons they learn they are on the right path and they gain an ally. Kri, believed dead, resurfaces with wisdom garnered from the Chained God. It seems even Tharizdun himself is against Vestapalk.

What listeners say about The Eye of the Chained God

The perfect ending to an amazing trilogy.

This book is the perfect conclusion to what seems a 50+ D&D Session!
I just imagine friends gathered at a table, rolling dice and playing these amazing characters. Bassingthwaite did an amazing job at balancing all the characters throughout the story, and allowed every character to shine in their own way. I could not recommend this series enough.

Best one out of the series and i couldnt stop lostening till it was done. D&D fans are sure to love it. =D

Can you have a good anti-climax?

I listened to this right after I finally managed to finish the second book in the series (of which no review of mine has been printable). To be honest, just don't read it. You probably shouldn't read any of them.

If you finished the first two novels in the series and are still even considering buying this book, then feel free to consider this review ignorant, uninformed hate-speech, but do remember later when you're feeling bored, let-down, and taken-advantage of, that you were warned.