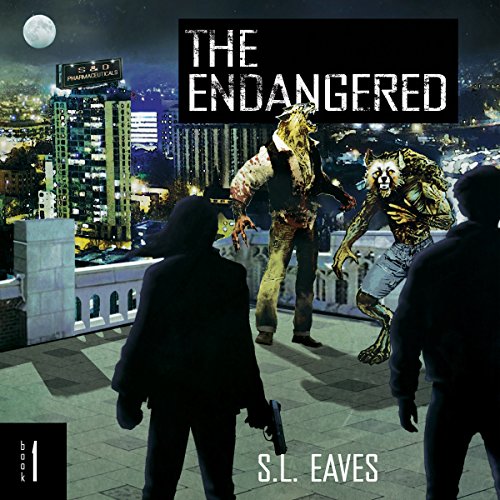 Audiobook one of the Endangered series introduces Lori, a newly turned vampire who's been pulled into the middle of a war against werewolves who are infecting humans and threatening to take out the last of their kind in the process.

S&D Pharmaceuticals is developing a new vaccine with sinister side effects. A viral outbreak has the humans begging for a cure, and Striden, the CEO of S&D, offers a remedy that promises to cure the virus, but is engineered to turn its unsuspecting patients into werewolves.

The werewolves are opposed by an allegiance of vampires who, while initially out for revenge, stumble onto the wolves' plans for mass infestation.

Among the vampires is an ambitious rebel named Catch and his newly turned protege, Lori. Catch brings this treacherous world to Lori's doorstep and turns both their worlds upside down in the process.

Secrets are exposed, allegiances are formed, and blood is spilled as they do everything in their power to preserve both their own kind and their food supply.

What listeners say about The Endangered

The vampires and werewolves are at war; i.e., Underworld without the awesome graphics. Our protagonist Lori is a college student recruited by the vampires to aid them in the war. Her mentor Catch is a formidable warrior and introduces Lori to the pros and cons of vampiric life. Catch is unfamiliar with the responsibilities of a mentor but in the process becomes close to Lori in a budding relationship. The werewolves have an ulterior motive concealed within the pangs of war. S&D Pharmaceuticals, run by an alpha werewolf, is working on a vaccine to combat a viral outbreak currently spreading throughout the country. Unknown to the human population, the vaccine will turn recipients into werewolves. The vampires, of course, want no part of this madness for a couple of reasons; one, the balance of the war, and two disrupting their food supply. The story chronicles Lori’s indoctrination into the vampire life, her acceptance of this life being forced upon her, and the war she finds herself embroiled in. Lori is a strong character, although her “conversion” is a bit bumpy, she adopts quickly. “Endangered” is a good start to an interesting series. I was given this free review copy audiobook at my request and have voluntarily left this review.

This book was well written, full of action, betrayal, twist and turns. I stayed on the edge of my seat through out. Loved the characters. It reminds me a little of Jeaniene Frost's Night Huntress books. I definitely will do more in this series. The only thing i did not like was the fact that Catch died. That bothered me greatly. But i still enjoyed it. The narrator did a great job. I received this book as a gift at my request in exchange for an honest review.

This is a fantastic read. The Narrator does a fantastic job. If your a lover of the Supernatural this is definitely a must read. There are twists and turns that have you on the edge of your seat. I definitely recommend.
Shauna Joesten

I absolutely fell in love with this main character (and everyone in her 'vampire family') and really was hooked into her story of becoming a vampire.

I love the author's take on the world of vampires and werewolves, making this a highly entertaining paranormal read!

I hope this is an action movie one day!

Well Written and a wonderful start to a series!

If you like Underworld you will enjoy this! This is full of action, twists and turns at every corner and so much more!! Holly Holt did a beautiful job and I really hope this turns into a movie or tv series!! There is alot of stuff that will have you holding your breathe and out right want to hollar! It is so worth a credit!!

Read by the amazing Holly Holt

The Endangered Series is pretty great on its own, and doesn’t really need much talking up. What I do want to talk about is this narrator. Holly Holt has very quickly become one of my preferred narrators. She is a rising star and I see great things coming from her.

Nice take on the vampires/werewolves stories

I couldn't put it down!. Vampires vs Werewolves and add a few demons in for good measure and here you have The Endangered. Vampires live forever, or at least, until they don't. Warning, don't get too attached to these characters! The drama this author brings via the personalities and depth of the characters is hard to match in this type of genre. The moral issues she brings on "when is it right to kill" is handled very well within the characters.
I listened to the audiobook version and Holly Holt is perfect for this. She brings the characters to life and allows us to feel all of those feelings.
I cannot wait to listen to book 2!

This book was pretty good. The characters are well developed and interesting. However the story moves fairly slowly. This story is very much a young adult style. This is not my type pf story but I was able to make it through. If you like stories like Twilight you will like this book.

This story is different, fast paced with action and adventure. All the ingredients I like in a book.
The werewolves are plotting domination and the vampires are planning to stop them.
Would recommend it.

good story but not the best writing.

overall the book had a good story that I could get into. the writing leaves a bit to be desired the author tends to skip over parts they aren't important parts but would skip over how they got from one place to another narration was good.

The blurb intrigued me and this book definitely paid off. The characters were interesting and the suspense was next level definitely worth listening to.

Holly was fantastic as always pushing this beyond the normal

amazing book can't wait for more
newly turned vampire who's been pulled into the middle of a war against werewolves
who are infecting humans and threatening to take out the last of their kind in the process.