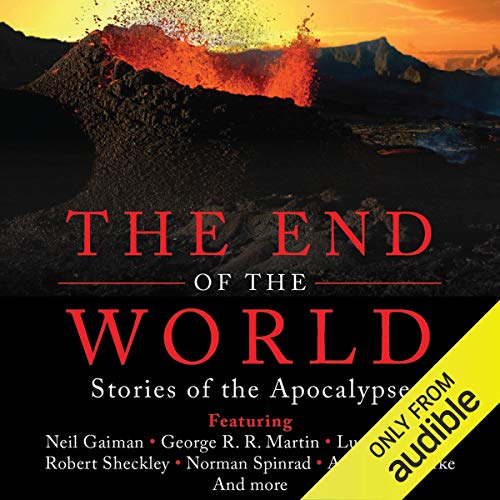 The End of the World

Famous stories of the apocalypse by the world’s best science fiction writers.

Before The Road by Cormac McCarthy brought apocalyptic fiction into the mainstream, there was science fiction. No longer relegated to the fringes of literature, this explosive collection of the world’s best apocalyptic writers brings the inventors of alien invasions, devastating meteors, doomsday scenarios, and all-out nuclear war back to with a bang. The best writers of the early 1900s were the first to flood New York with tidal waves, destroy Illinois with alien invaders, paralyze Washington with meteors, and lay waste to the Midwest with nuclear fallout. Now collected for the first time ever in one apocalyptic volume are those early doomsday writers and their contemporaries, including Neil Gaiman, Orson Scott Card, Lucius Shepard, Robert Sheckley, Norman Spinrad, Arthur C. Clarke, William F. Nolan, Poul Anderson, Fredric Brown, Lester del Rey, and more. Relive these childhood classics or discover them here for the first time. Each story details the eerie political, social, and environmental destruction of our world.

What listeners say about The End of the World

The Apocalypse Without Zombies

Here's an interesting idea, suppose they gave an apocalypse and no zombies came? This anthology bucks the trend of zombies ruling over the apocalypse that is so prevalent in today's science fiction and horror literature (the stories collected here were written before the recent zombie craze.)

Actually, there is one story (The Underdweller by William F. Nolan) that is somewhat zombie-like in the same way that Richard Matheson's I Am Legend is, in that the world is overrun with monsters. Exactly what kind of monsters though remains to be seen until the shock ending.

The primary narrator was monotonic, which killed the mostly mediocre stories. Hard to listen to.

The End of the World

I will admit that I did not finish this book. I skipped a couple of the stories because they just didn't grab my attention. Others had horrible endings; in fact, I really didn't realize they were finished until the next story started. That one thing seemed to be a theme for most of these stories. As with most anthologies, there were a lot of stories that seemed to be filler instead of being selected for their quality. Or, maybe they were selected for the author. I'm not sure.

There were a couple that were unique and entertaining, namely "Hum" and "I Can Get Them for you Wholesale". A lot of the stories were mostly sci-fi and really didn't involve "the end of the world" (at least in my opinion).

All in all, I was disappointed in this book and I am glad that I didn't spend any money on it, instead borrowing it through Kindle Unlimited. The narrator did a pretty good job, but a lot of his performances were pretty lackluster.

Book does not play

This book did not play the sories. It only played a part of the international part then stopped and went to rate book. Please find out why it will not play off refund book. Thank you.

Mix of good and terrible stories.

The good stories carried the narrator, but the others only enhanced a droning and rather flat performance. Such a combination almost made me put the book down for good several times.

old sci-fi stories,some better than others but all interesting. performance ok but the writing styles made some of the stories hard to follow. Doomsday stories are not cheerful, so you might want to listen to a few at a time.