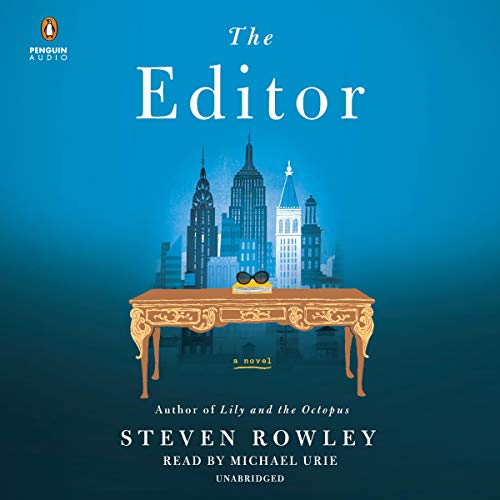 By: Steven Rowley
Narrated by: Michael Urie
Try for $0.00

From the best-selling author of Lily and the Octopus comes a novel about a struggling writer who gets his big break, with a little help from the most famous woman in America.

After years of trying to make it as a writer in 1990s New York City, James Smale finally sells his novel to an editor at a major publishing house: none other than Jacqueline Kennedy Onassis. Jackie - or Mrs. Onassis, as she's known in the office - has fallen in love with James' candidly autobiographical novel, one that exposes his own dysfunctional family. But when the book's forthcoming publication threatens to unravel already fragile relationships, both within his family and with his partner, James finds that he can't bring himself to finish the manuscript.

Jackie and James develop an unexpected friendship, and she pushes him to write an authentic ending, encouraging him to head home to confront the truth about his relationship with his mother. Then a long-held family secret is revealed, and he realizes his editor may have had a larger plan that goes beyond the page....

From the best-selling author of Lily and the Octopus comes a funny, poignant, and highly original novel about an author whose relationship with his very famous book editor will change him forever - as both a writer and a son.

One of Southern Living's “25 Beach Reads Perfect for Summer”

One of PopSugar’s “Buzzy Books to Read This Spring”

One of Cosmopolitan's “13 Best Books Coming Out in April

"The editor makes James a better writer, and The Editor will make you want to be a better son." (NPR)

“Filled with whimsy and warmth, the Lily and the Octopus author’s second novel centers on the complex relationship between a fledgling writer and his fabulous editor, the latter of whom becomes a mentor, friend, and maternal figure. Oh, and she happens to be Jacqueline Kennedy Onassis, but that’s Mrs. Onassis to you.” (O, The Oprah Magazine)

“Steven Rowley is the best-selling author of Lily and the Octopus, and he's honestly outdone himself with The Editor.” (Cosmopolitan)

What listeners say about The Editor

I purchased this title as soon as it was available, not knowing what it was about. Lily and the Octopus was one of the best audiobooks I have ever owned, so I didn't think twice when The Editor was available to buy. I felt it dragged at times, but still has the same heart as Rowley's previous novel. I love his honesty and his ability to touch a reader without being cheesy. I also could listen to Michael Urie read the phonebook; he's very talented as a narrator. I would definitely reccomend this book.

I loved this experience. Michael Urie was absolutely the perfect person to tell Francis’ story. The story itself was a stunning picture of the complicated yet loving relationship of a mother and son; of a family; of love. I laughed out loud and cried softly. I loved Lily and the octopus and this was even more amazing, I can’t wait for his next book.

The book was witty, charming, and interesting. Michael Urie made the book even more charming!

Whining. Hours and hours of whining.

I don’t think I’m quite to the middle of the story yet but I am really annoyed. It is like listening to this man whine on and on about everything. I mean everything. Even describing where he is sounds like he’s whining. Somebody else should have performed this book.

I really enjoyed the story. I felt like this is one of the best narrations I’ve listened to on Audible. Michael Urie is fantastic!!!!!!!

Wonderful, heartwarming and tearful. Makes you rethink your own family and what they mean to you.

In Awe of Jackie and now Steven Rowley

How many of us were not captivated by Jacqueline Bouvier Kennedy Onassis? I loved the humor that delivered insight into family and humility. The narrator, Michael Urie is a perfect fit and created many spot on laughs!

Captivating from beginning to end! A story of true family life and the unique love between a mother and her son.