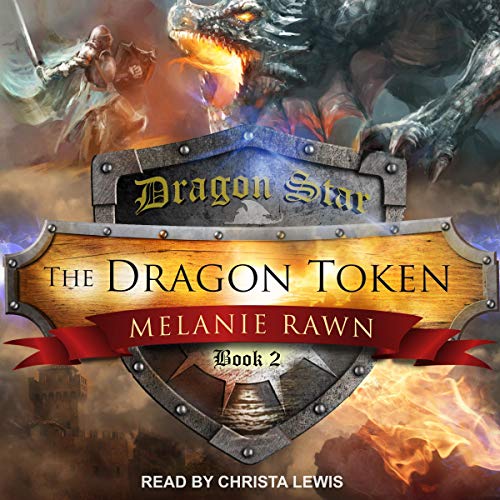 By: Melanie Rawn
Narrated by: Christa Lewis
Free with a 30-day trial

With her best-selling fantasy trilogy, Dragon Prince, Melanie Rawn introduced us to Sunrunner's magic and sorcerous evil, to a ruler striving to bring peace to warring kingdoms - and to her magnificent dragons.

In Stronghold, the first novel in Rawn's Dragon Star trilogy, the peace won by High Prince Rohan is shattered when a mysterious invasion force begins a devastating campaign against the people of the Desert.

Now, in The Dragon Token, the time for retreat has come to an end as Rohan's son and heir, Pol, rallies his forces in a desperate bid to halt the advance of the invaders. But ancient rivalries begin to weaken his alliance and only time will tell whether those loyal to the High Prince can defeat both the foreign invaders and the betrayers in their own ranks.

And even as Pol leads his troops forth, Andry, the Sunrunner Lord of Goddess Keep, is also determined to take the attack to this enemy force which has sworn to slay all workers of magic.

Yet the invaders have their own agenda of conquest, and they are even now readying to strike at the very heart of the Desert, stealing treasures which Pol and Andry would pay any price to reclaim - even if the price should prove to be their own lives....

What listeners say about The Dragon Token

I have enjoyed the entire series.

I found the book very enjoyable. I love the way other ways to live life are introduced in fictional worlds. This series did not disappoint. The story with it’s action and interaction with characters was also enlightening.

I have read these books countless times over the years. Melanie Rawn is one of my favorite fantasy writers. Listening to them is like hearing them for the first time again. What a wonderful experience.. I highly recommend!!!

Much more than a token

This 2nd (or 5th) session of the tale of the dragons and the many humans fighting around them continues to entrance this reader as Melanie Dawn builds her epic masterpiece. Christa Lewis continues her 5 star performance of narrating the audio version that brings alive all the emotions and life force of every scene in this tale. I patiently await the completion of this astounding tale as a child awaits the bedtime book the parent reads each evening that stirs wonderful scenes of one's imagination.