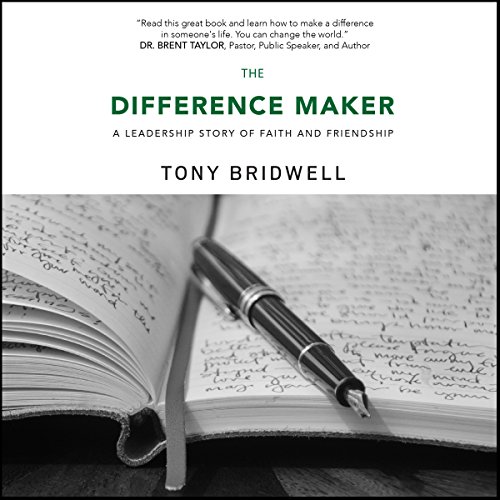 The Difference Maker: A Leadership Story of Faith and Friendship

The Difference Maker: A Leadership Story of Faith and Friendship

"I was lured into believing that success was about money, power, fame, and pleasure. If those things defined success, then I should have opted for failure. My true success in life came when my focus was on doing what God wanted me to do and investing in the life of others. My only regret is that I wasted so many years chasing the wind when I should have been all in from the start" - Taylor Bellows

The death of Taylor Bellows, one of the wealthiest men in the world, devastates Brendan Austin, his best friend since childhood. But even more than Taylor's death, it's the set of journals he left behind that shakes the foundation of Brendan's life.

Brendan and Taylor grew up together, from their days spent having adventures in the woods and pretending to be businessmen in Taylor's father's office to their eventual careers and marriages to the lovely Allison and Ann; and to Taylor's struggles with infidelity. But through it all, Brendan and his wife Ann stood by Taylor and Allison, mentoring and guiding them toward the truth, even as Brendan often felt that Taylor resisted taking his words into his heart. And now, in reading Taylor's journals, Brendan uncovers things he had never known...about his friend, his life, and his faith. He discovers what it means to be a difference maker.

A conversation starter and an approachable guide in fable format for mentors both deliberate and unintentional, The Difference Maker looks at the godly principles of true success, mentorship, leadership, courage, and transformation. The truths are powerful and applicable, in life and in faith, for everyone who hears them. Learn how to lead others while you follow "The One".