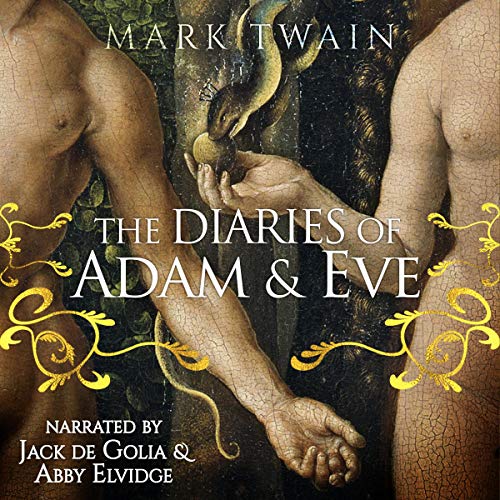 The Diaries of Adam & Eve

Mark Twain's "Extracts from Adam's Diary" first appeared in 1893. He based Adam and Eve on himself and his beloved wife Olivia ("Livy") to create a humorous counterpoint the traditional Garden of Eden story, this time centered on what life may have been like for the first man.

In this story, we hear Adam trying to work out what the "new creature with long hair" is all about. She names things, much to Adam's annoyance. She follows him around. Then suddenly, there's another creature, which eventually Adam decides is his son Cain. It's all about confusion and curiosity, and finally, love for Eve.

The innocent lark of the first story was joined in 1905 with a more wistful tale, "Eve's Diary". Twain's personal life had been turned upside down by Livy's death in 1904. While the humor of the first Adam story comes through, the Eve tale is, at its heart, a sweet eulogy from an aching heart, exemplified by the Eve story's closing line, "Wherever she was, there was Eden."

What listeners say about The Diaries of Adam & Eve

Twain's version Adam comes across as the original couch potato, grumpily uninterested at first in the new long-haired creature with the different shape who keeps pestering him with her new ideas. Eve, by contrast, is the talkative, ever-curious .

The Diaries of Adam & Eve

This was an excellent read!It was so witty and funny! Jack de Golia and Abby Elvidge were fine narrators. I was given this free review copy audiobook at my request and have voluntarily left this review.'

I received a free copy of The Diaries of Adam and Eve By Mark Twain, and narrated by Jack de Golia, and Abby Elvidge in exchange for an unbiased review. This review copy Audio Book was provided by the author/narrator/publisher free of charge.

The Diaries of Adam and Eve was a delight to listen to. It actually put a smile on my face that stayed there long after the story ended. The narration kept the story flowing at a good pace. I will be placing this in my file to listen to again and again.

Adam meet Eve, Eve meet Adam and get ready to laugh as you listen to their thoughts of each other and their surroundings. Adam is pretty annoyed at Even who he just met and who consistently talking when he just want to be alone. Eve is pretty much outgoing and everything around her is so new that she is excited about it and just want to talk to Adam about it. The funnies pare for me was when Eve had Cain and what Adam thought of this 'strange animal"! This lovely/funny little story will leave you shaking your head with a big smile on your face.