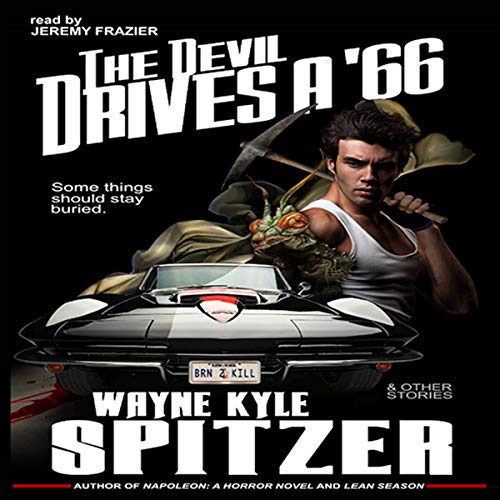 By: Wayne Kyle Spitzer
Narrated by: Jeremy Frazier
Try for $0.00

It was all too much — the car that had been buried for 52 years yet started right up, the flashback to the 1960s and the ghostly girl, the bugs the size of dogs whose stench filled the cab and caused me to retch. I gripped the door handle instantly — even as the little chrome knob dropped, locking me in. Then we were accelerating — abruptly, powerfully — whipping around the cars in front of us and blasting through the intersection: the girl vanishing, just winking out of existence, the bugs making a sound like crickets but magnified a hundred fold — the V-8 (or whatever it was) roaring.

Right there, James. The infestation. Do it!

But I wasn’t driving. No, I could see that wasn’t true: My foot was on the pedal just as sure as my hands were on the wheel. And that foot dipped suddenly even as the skateboarder came into view — his eyes widening, his free leg kicking — so that he disappeared into an alley even as we exploded past — fishtailing to a halt in the middle of the road, where the high-compression engine sputtered and the glass packs rumbled — before my foot once again hit the gas and we tore after him, burning rubber.

And then we were bearing down upon the kid, as he kicked and kicked furiously and glanced at us over his shoulder. As I looked in the rear-view mirror and saw the bug-things leaning forward (as though in anticipation). As I fought whatever impulse had taken oven my limbs and partially succeeded — too late.

There was a thud-crunch! as he vanished beneath the hood — and the car bucked violently, as though I’d driven over a curb. I ground the brakes, glancing in the mirror — saw him tumble after us like a bag of litter. Only then, after I’d come to a complete stop, did it occur to me: I could see out the back window. The bugs were gone. The kid, meanwhile, was still alive — good God! — and thus it wasn’t too late; I could still help him, still save him.

We’re not finished yet, James.

I felt the gearshift in my hand — saw that I’d already put it in reverse and was stepping on the gas, letting out the clutch. And then the car launched backward — reversing straight as an arrow....

What listeners say about The Devil Drives a '66

I recommend this book

loved it,very good. creative writing. looking forward to more books from Wayne. can't wait to read the next one