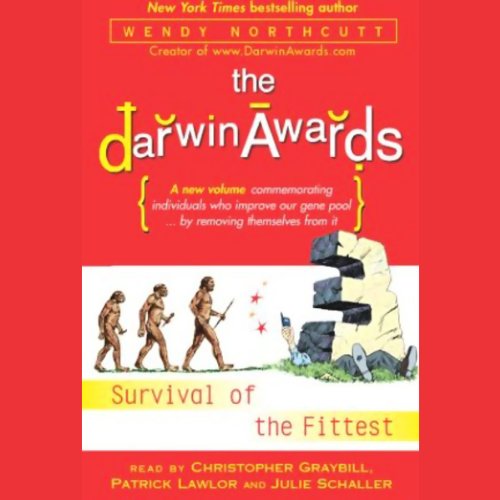 Survival of the Fittest
By: Wendy Northcutt
Narrated by: Christopher Graybill, Patrick Lawlor, Julie Schaller
Length: 3 hrs and 25 mins
3.5 out of 5 stars 3.7 (58 ratings)

One of the human race's most popular humor series returns with a brand-new collection of hilariously macabre mishaps and misadventures. Honoring those who improve our gene pool by inadvertently removing themselves from it, The Darwin Awards III shows once more how uncommon common sense still is.

From the sheriff who unintentionally shot himself twice, to the insurance defrauder who amputated his leg with a chainsaw; from a farmer who avoided bee stings by sealing his head in a plastic bag, to the man crushed by the branch he'd just severed; The Darwin Awards III proves again that when it comes to stupidity, we are the most advanced species on the planet.

"This collection of true stories is so funny that you may find yourself close to earning a Darwin yourself if you listen while driving. This is due both to the clear prose in which Northcutt describes the events and to the way narrators Graybill, Lawlor, and Schaller deliver these stories. Each has a tongue-in-cheek delivery that allows the humor to shine through. Each pauses for effect when necessary, or simply when someone has done something so stupid as to stun the reader into silence." (AudioFile)

What listeners say about The Darwin Awards III

Possibly if it were read by someone who thought the material was funny, rather than two people who took turns sounding bored.

Has The Darwin Awards III turned you off from other books in this genre?

Would you be willing to try another one of the narrators’s performances?

I think it mayl have been funny in print

I've heard peopel on podcasts and radio quote things from the Darwin Awards .. and it was very funny. Partly becasue the DJ or Podcaster thought it was funny and it showed in their voices .. which added to the expectation that what they were saying was about to get really funny.
These two sounded like they were reading from a college textbook. And they were definitely READING from something, not presenting the inforamtion in any smooth, natural speaking kind of way. They ruined the whole thing.

As has been proven through the Ages, other people's stupidity is something humans find a great source of humor. The more stupid the other person's actions, the funnier we find it. The fact that this stupidity could lead to someone's demise does not seem to diminish from our perception of its funniness. As such, this book continues that great comedic tradition. As in the psychological phenomenon known as "Schadenfreude," other people's short-comings can be satisfying, by making us feel superior.
Listening to this, I got that much-needed ego boost. Just the thing to listen to after getting laid off!