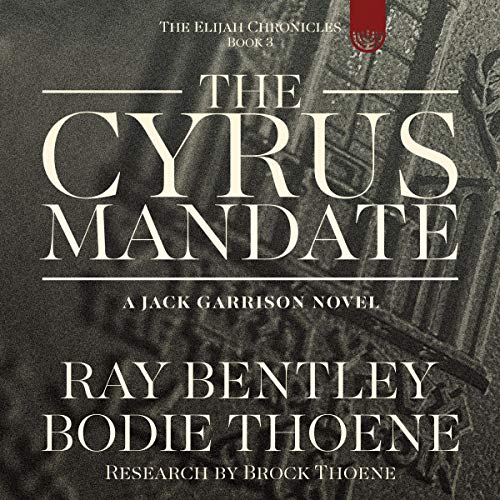 By: Ray Bentley,Bodie Thoene
Narrated by: Steve Corona
Try for $0.00

A plot to kill. Dark secrets from the Deep State. Visions linking the past, present, and future.

A 2,500-year-old prophecy, the Cyrus Mandate, is coming to life in our present-day headlines and current events. First issued by an ancient Persian King, the Cyrus Mandate is awakened again through the Abrahamic Accord peace treaty, causing the entire world to take notice. National elections, international leaders, even Middle East negotiations appear to be following the ancient path. Everything and everyone involved becomes part of seeing how this promise will be fulfilled. As Jack and Bette Garrison are drawn into a dangerous international conspiracy while celebrating their honeymoon, they discover the Cyrus Mandate’s secrets. They travel from Paris to the US to Israel to help rescue a brave reporter and learn the terrifying secrets she has uncovered. Drugs, trafficking, and corruption at the highest levels revolve around a world-wide pandemic, anti-Israel propaganda, racial tensions - and ancient prophecies being fulfilled. Pause-resisting action, romance, history, and prophecy come to life as Ray Bentley and Bodie Thoene release the third installment of The Elijah Chronicles: The Cyrus Mandate.

What listeners say about The Cyrus Mandate

I wish book was longer

I LOVE how Pastor Bentley and Bodie Thoene weaves the Bible scriptures and the current events of the world in their books. I CAN NOT WAIT TO READ NEXT BOOK.

Though it went by way too quickly. The performance was good other than Bette mostly, and the other female voices somewhat. I think he would have done better just to use his own voice rather than to try to make her voice sound feminine. The voice he used for Bette just ended up sounding kind of creepy to me.

I love the Author and plan to hold & read the book. I found it difficult to follow the audible story and the accent. I didn’t get far. I’m certain it is a good book.

There was quite obviously a lot of heavy duty research invested in this story that provided many plausible connections from the past to current and even perhaps future connections. Frankly, that research is one of the primary attractions to anything attached to the Thoene name. It seems to me that plenty of room was created for at least 1 more book. However, the consistent references to Notre Dame made me uncomfortable because it made me wonder if the author (I'm thinking it must have been Bentley in this particular case) is a believer in the Fatima prophecies. If so, I wonder how that ties in with the Jewish understanding that Rome is Esau...even to the point that in early Church history, Romans dressed Believers in animal skins to facilitate attacks in the Coliseum, a direct "nod" to Jacob using animal/goat skins to manipulate Isaac into giving to Jacob the "blessing" Esau had already sold to Jacob for a bowl of beans. Esau vowed revenge, to kill his brother, and this use of animal skins was definitely part of it. It would be interesting to see in a future book how the juxtapositioning of these these two adverse understandings would fit into the plot or if it would be avoided altogether. If there is another book, I'll definitely be looking for that little twist.

Enjoyed the story & some of the possible prophecy fulfillment. Some seemed a little far fetched though. Steve Corona did an outstanding job of narration. Would love for him to continue narrating other Thoene books.